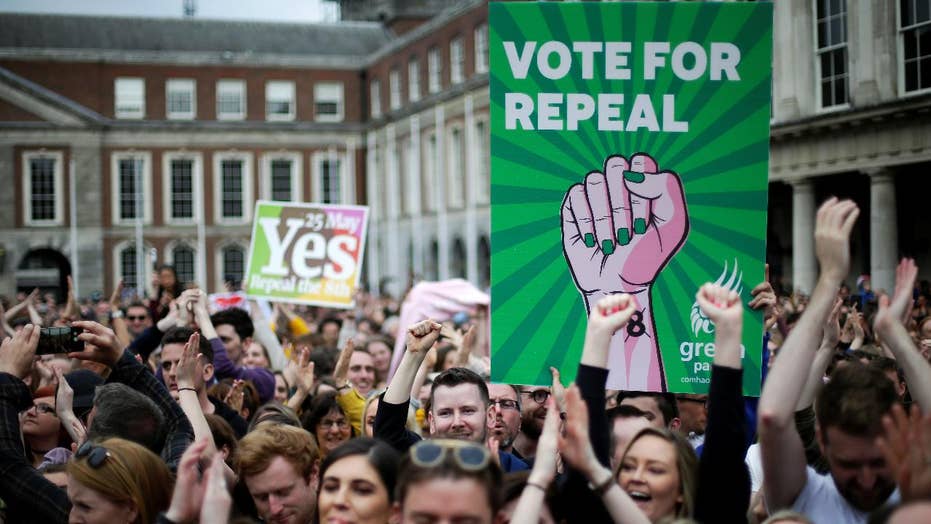 Irish voters approved the repeal of the abortion ban by over 66 percent; Kitty Logan reports.

In a historic vote, Ireland has chosen overwhelmingly to repeal a constitutional ban on abortions, election officials announced Saturday.

Irish voters approved the repeal by a vote of 66.4 percent to 33.6 percent--with more than 2.1 million votes cast, according to the official tally.

At 64.5 percent, the turnout was one of the highest ever recorded for a referendum in Ireland and the highest of any referendum since 1992, The Journal reported.

Earlier Saturday, the Irish Prime Minister hailed the apparent vote for overturning an abortion ban in his largely Catholic country as "the culmination of a quiet revolution.”

People from the"Yes" campaign react as the results of the votes begin to come in, after the Irish referendum on the 8th Amendment of the Irish Constitution at the RDS count centre, in Dublin, Ireland, Saturday . (AP Photo/Peter Morrison)

The prime minister, a medical doctor who came to power last year, spoke to RTE News in advance of the announcement of the referendum's official results. He is expected to address the nation later Saturday.

“What we have seen today is a culmination of a quiet revolution that has been taking place in Ireland for the past 10 or 20 years,” he said.

Earlier Saturday, a leading anti-abortion group called the vote a "tragedy of historic proportions" as it conceded defeat.

John McGuirk, spokesman for the Save the 8th group, told Irish television that many Irish citizens will not recognize the country they are waking up in.

"You can still passionately believe that the decision of the people is wrong, as I happen to do, and accept it," he said. "I don't think you'll find many people on our side of the referendum who don't accept the result. That would be wrong."

The Irish Times and RTE television exit polls suggest the Irish people have voted by nearly 70 percent to repeal a 1983 constitutional amendment that requires authorities to treat a fetus and its mother as equals under the law. Currently, terminations are only allowed when a woman's life is at risk.

If the projected numbers hold up, the referendum would be a landmark in Irish women's fight for abortion rights. It would also likely end the need for thousands of Irish women to travel abroad — mostly to neighboring Britain — for abortions they can't get at home.

Ireland's Minister for Children and Youth Affairs Katherine Zappone said Saturday she is confident new abortion legislation can be approved by parliament and put in place before the end of the year.

"I feel very emotional," she said. "I'm especially grateful to the women of Ireland who came forward to provide their personal testimony about the hard times that they endured, the stress and the trauma that they experienced because of the eighth amendment."