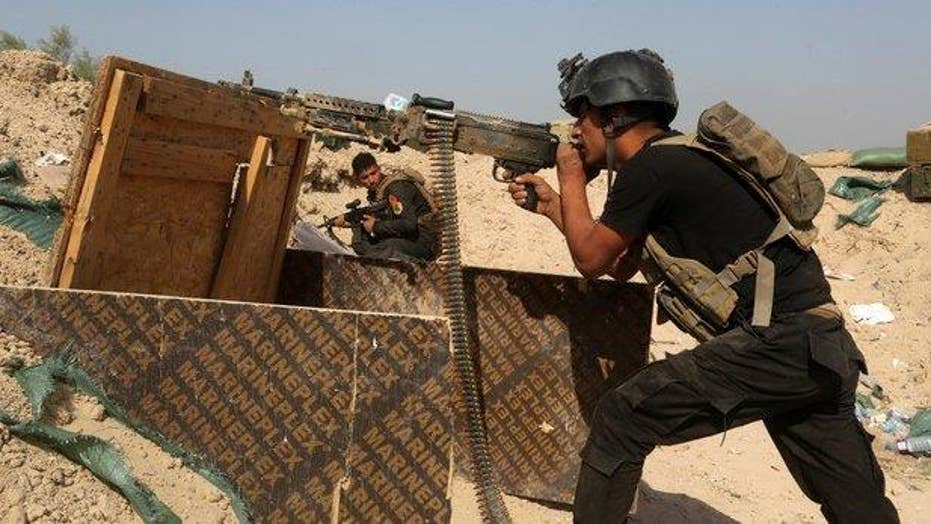 Oliver North: Fight for Mosul to last 'many more months'

SINJAR CITY, Iraq – It’s been one year since ISIS was driven from the Iraqi city of Sinjar, but the Yazidis who called it their capital do not plan to rebuild, at least not in the same location.

The black-clad jihadist army left mass graves and rubble in its wake, and now, from an abandoned home in Sinjar, also known as Shingal, Mayor Mahma Khalil is meeting with his top aides to plan a new city, next to the old one.

Baker, a 30 year-old farmer, lives with his family on the mountain, while the boy at right was spotted through a gate inside the city. (FoxNews.com)

"We will build an entirely new city, next to this town," Khalil told FoxNews.com. "Economically, it is easier than to reconstruct. The infrastructure is destroyed. And there are too many bad memories here. Who wants to come back to these memories?"

The city once stood proudly at the base of Mount Sinjar, bustling with activity and steeped in ancient tradition. Farmers’ markets, festivals and Yazidi temples for the persecuted religious minority that made up 83 percent of the township dotted the cityscape.

The city lies in ruins, with rubble and booby traps everywhere. (FoxNews.com)

After more than a year of ISIS occupation -- and a fierce ground and aerial campaign to oust the terrorists -- there is little worth saving in the city 43 miles west of Mosul, and once home to 152,000 people.

Men guard the city from rooftops, as ISIS remains just miles away after being pushed out of Sinjar a year ago. (FoxNews.com)

When ISIS overran the city in August 2014, enslaving and slaughtering the people it considers devil worshippers, Sinjar was nearly leveled. Every building, including homes, hospitals, schools and merchant shops, bears the scars of fire, bullets and bombs. Rubble and wreckage are everywhere, and the bodies of former inhabitants are routinely discovered in graves on the outskirts. Fliers dropped by the Iraqi Army to warn of the offensive that liberated the city still litter the ground and roofs.

For now, ISIS is kept at bay by the Yazidi Peshmerga who guard the city’s perimeter. But sporadic mortar fire and the smell of burning tires -- an ISIS trick for disguising their movements with thick smoke -- are constant reminders that the enemy army is near.

And the Islamist army left poison in its wake that also makes rebuilding on the same grounds unwise. Homes remain booby-trapped and IEDs lurk on the paths and streets that crisscross the city.

On a recent autumn day, this little girl played in a garden as mortar fire echoed in the distance. (FoxNews.com)

"ISIS had chemical bombs here and light uranium has been found in neighborhoods," Khalil said. "We don't want to infect the people."

Just over a week ago, two soldiers entering a building stepped on a strip of metal. In an instant, the building came crashing down, the result of a meticulously planted trip wire.

Most of the people who once called Sinjar home are either dead, dispersed throughout nearby camps and villages or still held by the ruthless terrorist army. About 170 families have filtered back into the broken city.

Much of Sinjar is deserted and in ruines, but an estimated 170 families have moved back. (FoxNews.com)

From the streets of Sinjar, observers may see shy women step outside to find fragments of food or children peer through gaps in the gouged fences. On a recent autumn day, a little girl played with a plastic flower in a bombed-out garden. A headless doll in a blue dress lay beside her, and mortar fire echoed in the distance.

With the exception of a few generators and wells, there is no electricity, running water, heating, telephones, schools or services. For the most part, it's a ghostly Peshmerga military town made up of a few officials and soldiers who sleep on the roof of their command post -- once a children's school -- to keep guard.

The mayor said that local administrators have already started putting together a "master plan" for the new city, and he anticipates they will need at least $600 million to begin the process. Officials are said to have spoken to an array of government and non-government organizations in the U.S., but so far no practical steps forward have been reached.

"Morale to build this is very high, to give the local community jobs," Khalil assured. "I believe, together, we can do this in two years."

But it has not yet been agreed where the "New Sinjar" will be built.

"Some want it on the left of the city, some say right," Luqman Ibrahim, battalion head of the Yazidi fighters, said. "And then some say the city should be built up on the mountain."

While some locals advocate for just completely erasing the ruins -- and the nightmares it holds -- others have different ideas.

One Kurdish official said that they may leave the location in its present state of devastation, making certain safe areas something of a monument and museum to remember the genocide against the Yazidi people.

But there is no shortage of grim reminders of the plight of the Yazidis in the face of the ISIS onslaught. Routed from Sinjar, thousands of people sought refuge atop the mountain. Some were hunted down and killed before they made it; others died of exposure while trapped on the summit and awaiting an international airlift.

Now, the road that winds up the mountain is littered with burned cars and clothes. Encampments – little more than lean-tos made of bedsheets -- can be seen along the roadside, the new homes of Sinjar’s people.

For most, the prospect of rebuilding their city is a dream too distant to contemplate amid the daily struggle to survive.

"The elderly are dying. People have no money. When somebody gives birth, there are no doctors. They are alone in a dirty tent," grieved Baker, a 30-year-old farmer living on the mountain with his young family. "Babies are dying after just a couple of days, and our women are dying, too."