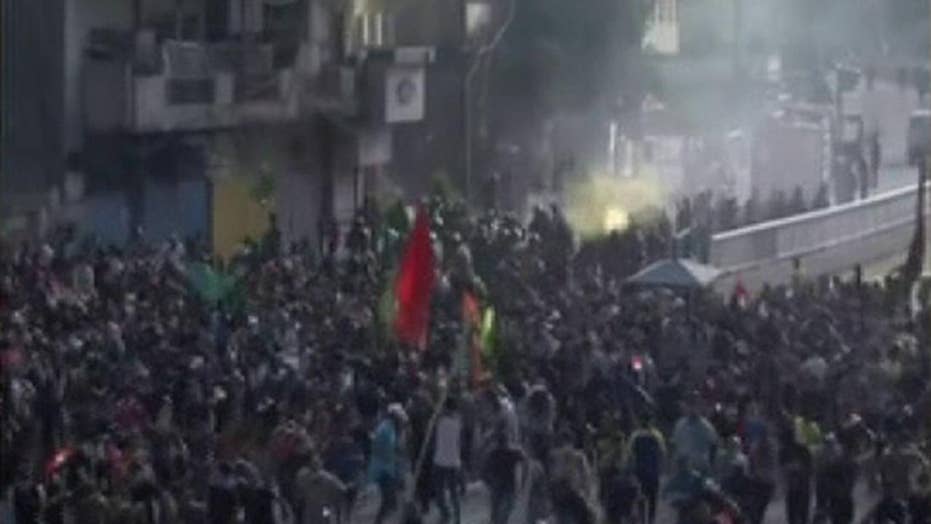 A small window of calm settled on the Baghdad streets on Sunday, following five days of violent protests. But, at dusk, the mayhem ricocheted once again through the Iraqi capital and southern cities with a clear message from civilians: Cut the corruption and provide essential services, and get Iran and its proxies out of government.

“Protesters are being burned with hot water, tear gas, and by live fire. We are poor people, and the Iranian-backed militias are doing this to us. They are even coming to the hospitals to kill the (wounded) protestors,” Abbas Naji, 24, who previously worked in hospitality in the southern city of Nasiriya, but for four years has been unable to find a job, told Fox News. “We Iraqis are against the existence of militias because they are a danger to us, and we are determined to continue this movement because we need jobs, and we need our services improved.”

Many demonstrators have accused the militias known as the Popular Mobilization Forces (PMFs) – which were formed in 2014 to fight the Islamic State – as targeting them on Tehran’s behalf and meddling in money-making, protecting corrupt politicians and acting out with impunity. However, they also have maintained considerable support across Baghdad, considered by many officials to be war heroes who victoriously defeated the terrorist scourge.

Naji lamented that Baghdad hospitals, under government pressure, were not providing accurate numbers of the dead and injured. He further contended that the “frequent flights” between Baghdad and Tehran were vessels for fighters and equipment to flood the country.

At least seven anti-government protesters were killed – mostly by police – in the ongoing violence Sunday, bringing the death toll to 104.

Anti-government protesters taking cover while Iraqi security forces fired during a demonstration in Baghdad this past Friday. (AP Photo/Khalid Mohammed)

The protestors, which have encompassed virtually all frustrated ethnicities and religious sects in Iraq, started peacefully – triggered by widespread upset after respected anti-ISIS leader General Abdul Wahab Al-Saadi was removed from his position heading the counterterrorism command. Many observers feared it was so a more “pro-Iran” figure could take his place.

But, calmer protests were quickly met with an iron fist, participants said. The Iraqi government, led by Prime Minister Adel Abdul Mahdi who took office a year ago, promptly moved to deploy security forces, blackout the Internet and impose a curfew. Such moves only angered the rancorous crowd who then turned out in even larger droves as attempts to silence them grew more apparent.

“Iran controls every sector of Iraq. There are no job opportunities, no services, and yet the irony is, Iraq is a very wealthy country. Iraqis are united in wanting to see the changes that Iraq deserves. Many have been killed or injured for this cause,” said Mohammed Saad, 30, a sales manager and prominent protestor in Baghdad. “I’ve seen snipers shooting unarmed girls straight in the head, young men asking for their rights only to be shot.”

Iraqi Army troops deployed at a site of protests in Baghdad on Sunday. (AP Photo/Khalid Mohammed)

In addition to the acrimony over Tehran’s shadowy puppet-master presence, the demonstrators – the vast majority from poor neighborhoods – have been riled by the lack of clean water, electricity and sufficient health care.

Iraq has remained one of the most oil-rich countries in the world, boasting the fourth-largest oil reserves on the planet, yet has been saddled with steep debt, poverty and unemployment.  An estimated $450 billion garnered by the state since Saddam Hussein’s ouster ten years ago has all but dissolved into the pockets of cronyism, corruption, and phantom soldiers, experts contended.

The unemployment rate has hovered at around 10 percent.

“There is no electricity, no clean water. The money from the oil goes to Iran; it is stolen from us,” Abdul Zaha al-Kinani, an unemploymed man in his mid-20s from Sadr City, said. “We want clean water, food. But, the militias from Iran are killing us, and the world is silent.”

An injured protester being carried after reacting to tear gas fired by security forces during a protest in Tahrir Square, in central Baghdad, last Tuesday. (AP Photo/Khalid Mohammed)

On Monday, Iraq’s national security advisor, Falih Al-Fayadh, stood firm that the government would not allow demonstrators to “bring down the Iraqi state.”

However, those civilians in the thickets of the chaos maintained that they were the ones being targeted by security forces, which have indiscriminately fired on them with live ammunition, rubber bullets, and tear gas. According to one U.S. intelligence source, there was a concern that the PMF militias also were posing as demonstrators and mixing in with the crowd, only to attack fellow protestors from the inside.

The unrest has been the steepest challenge facing the conflict-laden country since it declared ISIS defeated some two years ago.

In an attempt to quell the bubbling violence, the prime minister late Saturday declared several measures aimed at ending the low living standards and rampant corruption, as well as improving public services and job opportunities.

But, for many impassioned protestors, this wasn’t enough – they said the government must go.

“Iran controls out government, and no one is intervening to save us,” decried Abdul, a 24-year-old tour guide from Baghdad. “There must be a change in our parliamentary system, all these politicians have been the same for 16 years, and the thieves must be changed.”

INSIDE SADR CITY: HOW THE DEADLY SLUM BECAME THE 'PLACE OF PEACE'

Moreover, many members of parliament have suspended their work with the federal government, and scores of officials were said to have escaped north to the semi-autonomous Kurdish region and neighboring countries for their safety.

One former government employee, who spoke on the condition of anonymity, told Fox News on Sunday that he received an inside tip that he was “wanted” by the militias and the government for his outspoken government stance and escaped Baghdad in the dead of night to an undisclosed location.

The Grand Ayatollah Ali al-Sistani, Iraq’s top Shiite spiritual leader, has urged all sides to halt the bloodshed immediately. And, the president of the Kurdistan Regional Government, Nechirvan Barzani, told Fox News in a statement Monday that the region was “deeply concerned about the violence” and called on all parties to “respect the law, exercise restraint and protect the best interests of the nation.”

“We need to give the government a chance to address the demands (and stop) the snipers from Iran who have come to kill the civilians,” added Raed Hamdani, a Baghdad-based political analyst. “This isn’t protesting anymore. This is a fight between different armed groups and militias.”