Iranian dissidents opposed to the hardline regime in Tehran are urging their fellow citizens not to vote in next week's elections, which they describe as a “sham” -- calling on them to instead work to overthrow the struggling regime.

“The boycott of the sham elections is a patriotic duty and the bond of the Iranian people with their martyrs, especially the over 1,500 martyrs of the November uprising,” National Council of Resistance of Iran (NCRI) President-elect Maryam Rajavi said in a speech, referring to protests last year. “This boycott sides with the demands of the arisen people and students in January for the overthrow of the entirety of the illegitimate regime of the [absolute clerical rule].”

“Indeed, the vote of the Iranian people is ‘overthrow,’” she said.

Iranians go to the polls on Friday to elect members of the 290-seat Iranian parliament, less than two months since the killing of Gen. Qassem Soleimani in a U.S. strike, which shook the regime and boosted dissidents. That strike was followed by a new wave of sanctions by the Trump administration.

AFP reported that The Guardian Council, responsible for vetting candidates, has disqualified more than half of the 14,444 who looked to stand in the elections -- including many reformist and more moderate candidates. The outlet reported that many voters are consequently being faced with the choice of voting for hardliners or not voting at all, and that the election could even result in Iranian President Hassan Rouhani’s conservative rivals gaining seats

The BBC reported that any candidates from groups opposed to the Islamic Republic, or who want to change the system, are disqualified from running by the Council. 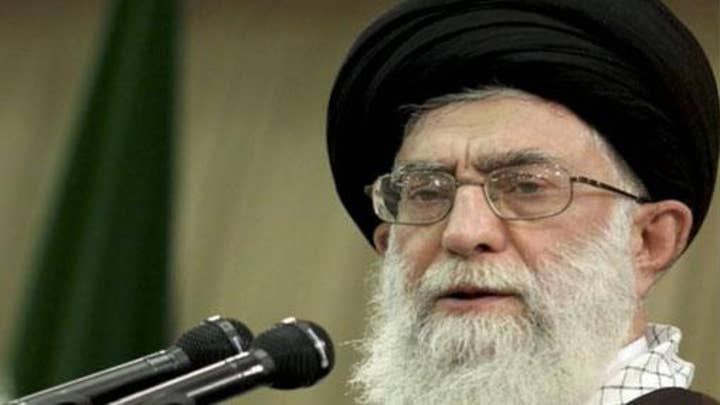 Activists on the ground say that Iranians are not apathetic, but will be boycotting the election. One activist in Tehran, who identified himself to Fox News as Kaveh, said that the Iranian people want to overthrow what he described as a “corrupt and criminal regime.”

US SANCTIONS AGAINST IRAN: A TIMELINE

“Basically, public participation in elections in a democratic government is the product of the public’s confidence in its democratic structure,” he said via text message. “But because we have a fascist government in Iran, people not only have no confidence in the structure of the regime, but they hate it.”

"In fact, what the regime calls the election is just a hoax to declare to the world that it has social legitimacy," he added.

There are signs of increasing activism and public anger at the theocratic regime, particularly amid an economy buckling under waves of U.S. sanctions imposed by the Trump administration as part of a “maximum pressure" campaign since the U.S. left the Iran nuclear deal in 2018.

Tensions exploded in November when thousands of Iranians took to the streets to protest against the regime, leading to a brutal crackdown from Tehran that saw at least 1,000 and as many as 1,500 killed and thousands more imprisoned. There were further protests in January, fueled in part by the regime admitting that it was responsible for the shooting down of a passenger jet amid heightened tensions with the U.S. after Soleimani’s death.

As the regime appears to weaken, even despite the crackdown on who can participate in the elections, opponents are seeing it as proof that the end is in sight.

“Today, [Supreme Leader Ali Khamenei] is trying to fill the reactionary parliament with absolute loyalists. This is because he sees closing ranks as the solution to dealing with the current crisis,” Rajavi said. “But, whether he succeeds or fails in this endeavor, in the end, the clerical regime has no way out and cannot forestall its overthrow.”