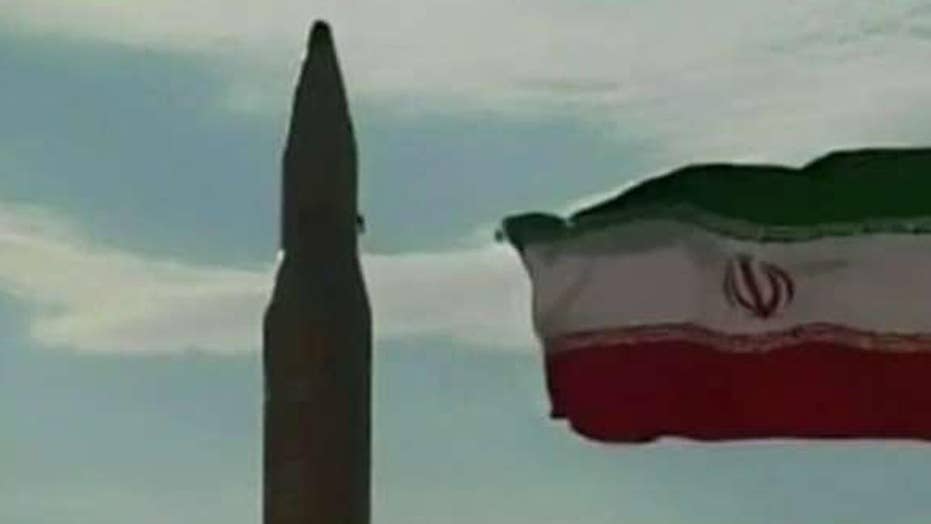 The launch occurred Sunday at a well-known test site outside Semnan, about 140 miles east of Tehran, Fox News was first to learn.

U.N. resolution 2231 -- put in place days after the Iran nuclear deal was signed -- calls on the Islamic Republic not to conduct such tests. However, this is at least Iran's second such test since July. The resolution bars Iran from conducting ballistic missile tests for eight years and went into effect July 20, 2015.

Iran is "called upon not to undertake any activity related to ballistic missiles designed to be capable of delivering nuclear weapons, including launches using such ballistic missile technology," according to the text of the resolution.

The landmark nuclear deal between Iran and world powers, however, does not include provisions preventing Iran from conducting ballistic missile tests, and Iran claims the tests are legitimate because they are not designed to carry a nuclear warhead.

President Trump on Sunday spoke with King Salman of Saudi Arabia, a conversation in which the two "agreed on the importance of rigorously enforcing the Joint Comprehensive Plan of Action with Iran and of addressing Iran’s destabilizing regional activities," the White House said in a statement.

The launch also came a day before Jordan’s King Abdullah arrived in Washington for meetings with Vice President Pence and Defense Secretary Mattis.

Israeli Prime Minister Benjamin Netanyahu said he would address the Iran issue with Trump when the two leaders meet on Feb. 15.

"I know that this bothers not only Israel, and not only the US but other countries in the region. Iran's aggression should not be ignored."

The U.S. intelligence community was able to identify Sunday's launch due to its robust satellite network. The overhead system can detect the heat signature of missile launches and explosions from bombs being dropped around the world.

Last March, Iran sparked international condemnation when it test-fired two ballistic missiles, one emblazoned with the phrase “Israel must be wiped out” in Hebrew.

U.S. Army Gen. Joseph Votel told lawmakers last March the United States should continue to "expose" Iran for the role that the rogue nation plays in the region, including its support for Syrian President Bashar al-Assad, responsible for dropping barrel bombs on his own people.

Dehqan said in September that Iran would beef up its defense capabilities by "manufacturing three fundamental products in the area of missile [development] by the end of the year."

"Iran's missile tests are an unacceptable act of aggression-something we have seen occur time and again for the last 18 months," Ambassador Mark D. Wallace, CEO of the non-profit United Against Nuclear Iran, responded.