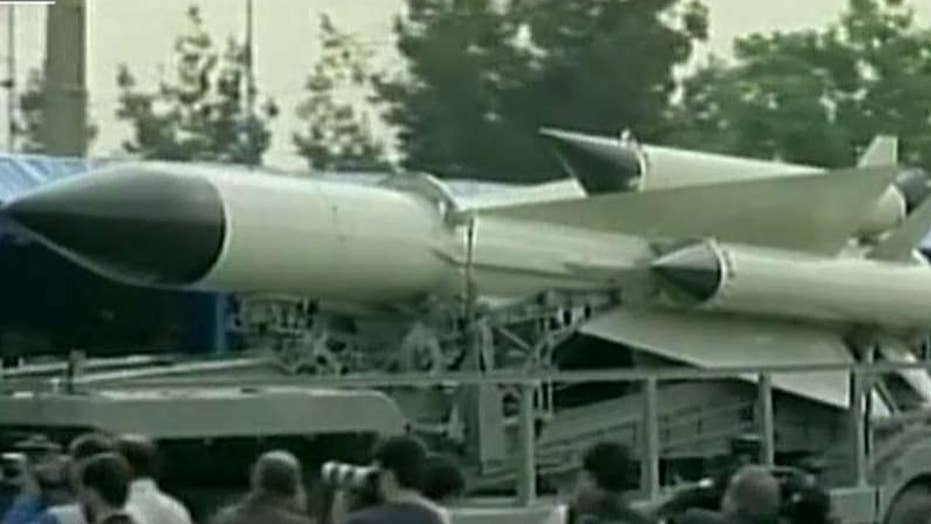 Continuing a pattern of provocative actions, Iran this weekend test-fired a pair of ballistic missiles and sent fast-attack vessels close to a U.S. Navy ship in the Strait of Hormuz, U.S. officials confirmed to Fox News.

One of Iran's ballistic missile tests were successful, destroying a floating barge approximately 155 miles away, two U.S. officials with knowledge of the launch told Fox News. The launches of the Fateh-110 short-range ballistic missiles were the first tests of the missile in two years, one official said.

It was not immediately clear if this was the first successful test at sea -- raising concerns for the U.S. Navy, which operates warships in the area, one of which had an "unsafe and unprofessional" interaction with Iranian Revolutionary Guard Corps. boats on Saturday.

The IRGC boats approached to within 600 yard of the tracking ship USNS Invincible and then stopped, officials confirmed to Fox News. The Invincible was accompanied by three ships from the British Royal Navy and all four ships were forced to change course, Reuters reported.

The Iranian provocations were partially obscured by a worldwide focus on North Korea's own ballistic missile tests.

“Between North Korea’s saber-rattling and Iran’s willful defiance, we certainly don’t lack for evidence of these rogue regime’s intentions," Sen. Tom Cotton, R-Ark., said in a Monday statement. "This is why we need to develop a strong missile-defense system and to take a harder line toward these regimes. No amount of words, however clear or forceful, will prevent this kind of aggression; only firm action to defend America and our allies will stop them in their tracks."

According to one official, Iran launched its two short-range ballistic missiles from an IRGC base in Bandar-e-Jask, in southeastern Iran. The first missile was fired on Saturday, but missed its target, though it landed “in the vicinity,” one official said. A day later, Iran made another attempt and was successful.

The Iranian Fateh-110 Mod 3 has a new “active seeker,” helping the missile locate ships at sea, according to one official.

"It's a concern based on the range and that one of the missiles worked," said one official, who requested anonymity because he was not authorized to disclose the launch.

According to the Foundation for Defense of Democracies, Iran has conducted as many as 14 ballistic missile launches since the landmark nuclear agreement in July 2015.

A senior U.S. military official told Fox News that Iran had made great advances in its ballistic missile program over the past decade.