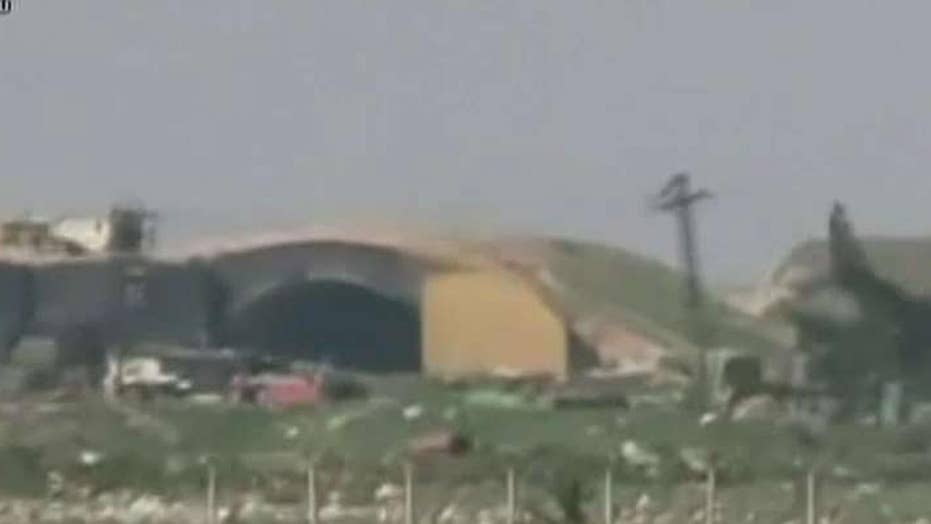 Alaeddin Boroujerdi, head of parliamentary committee on national security and foreign policy, declared "Russia and Iran won't be quiet against such acts which violate interests of the region," according to the report.

Iranian Foreign Minister Mohammad Javad Zarif took to Twitter on Friday to denounce the strikes, saying: "Not even two decades after 9/11, U.S. military fighting on same side as al-Qaida & ISIS in Yemen & Syria. Time to stop hype and cover-ups."

"US aids Saddam's use of CW against Iran in 80's; then resorts to military force over bogus CW allegations: 1st in 2003 and now in Syria,” Zarif tweeted.

The U.S. strike came in fiery retaliation for this week's gruesome chemical weapons attack against civilians.

About 60 U.S. Tomahawk missiles hit the Shayrat air base, southeast of Homs, a small installation with two runways, where aircraft often take off to bomb targets in northern and central Syria. The U.S. missiles hit at 3:45 a.m. Friday morning and targeted the base's airstrips, hangars, control tower, and ammunition areas, U.S. officials said.

Ghasemi described Iran as "the biggest victim of chemical weapons in recent history," referencing Iraqi use of the weapons during its 1980s war with the Islamic Republic. He said Iran condemned the missile launch "regardless of the perpetrators and the victims" of Tuesday's chemical weapons attack in Syria.

He also warned it would "strengthen terrorists" and further add to "the complexity of the situation in Syria and the region."

Iran is one of the biggest supporters of embattled Syrian President Bashar al-Assad. Its hardline paramilitary Revolutionary Guard is deeply involved in the war. America's Sunni Arab allies in the Gulf view Syria as a proxy conflict between it and Shiite power Iran.