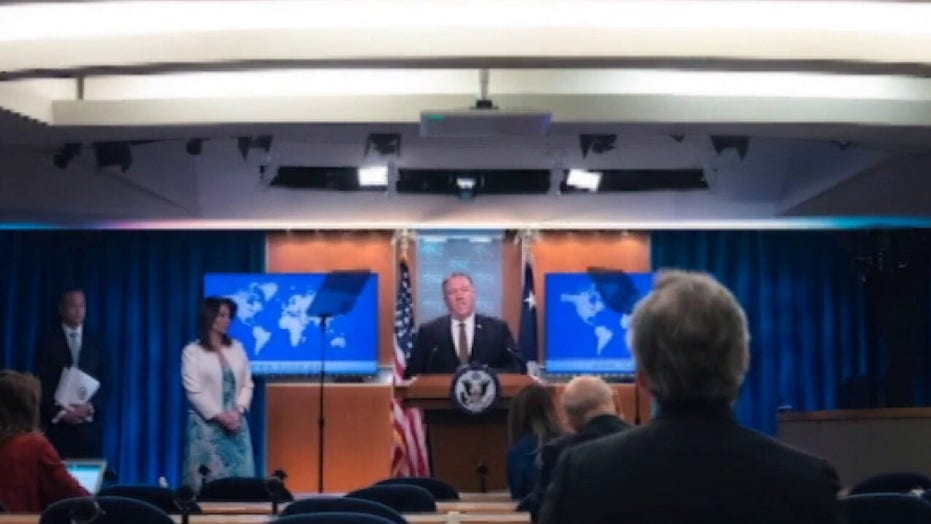 Secretary of State Mike Pompeo prepares to make argument claiming the U.S. is still part of the 2015 nuclear deal despite President Trump pulling out of it; Rich Edson reports.

Iran continues to be plagued by allegations of internal corruption, mismanagement and even U.S. sanctions violations as government officials scramble to contain the fallout from the coronavirus pandemic.

The country's Ministry of Health, the Iranian Revolutionary Guard Corps (IRGC) and two of the Supreme Leader's charitable foundations are entangled in the web of malfeasance surrounding questionable efforts to import diagnostic kits from South Korea, according to a report by the London-based Persian news channel Iran International.

Iran International published a letter, which was viewed by Fox News but could not be independently verified, that was allegedly sent by private company Irgan Mehr to the secretary of the coronavirus task force in Tehran's Ministry of Health more than two months ago, about the "competition process" between the ICRG and the Barekat Foundation – controlled by Ayatollah Ali Khamenei.

Both groups were seemingly fighting to secure the exclusive rights to import and distribute test kits from a leading South Korean company, MiCo BioMed.

"The sanctions have harmed people's lives, but most (Iranians) are sure that Iran's regime uses relief sanctions for feeding its militias in Iraq, Syria, and Yemen or steal," Mojtaba Pourmohsen, a journalist at Iran International, told Fox News. "Just as we saw with this recent (medical supply) deal."

In this picture released by the official website of the office of the Iranian supreme leader, Supreme Leader Ayatollah Ali Khamenei sits prior to address nation on state television, in Tehran, Iran, Sunday, March 22, 2020. Iran's supreme leader Sunday refused U.S. assistance to fight the new coronavirus, citing an unfounded conspiracy theory that the virus could be man-made by America. (Office of the Iranian Supreme Leader via AP)

The letter states that representatives from the Seoul-based company, which has affiliates all over the world, including in the U.S., were invited to Iran by Irgan Mehr. The Iran International report goes on to claim that a number of Tehran's top health ministry brass "used their influence" to ink a deal with the company via an ancillary foundation of the Supreme Leader, referred to as the Execution of Imam Khomeini's Order foundation (EIKO).

Testing kits were allegedly then purchased for $5.94, but sold by the government to embattled medical professionals and facilities for the inflated price of $14.25.

"Irgan Mehr company started negotiations with the Korean company in late February and assured them that although American parts have been used in the kits, the U.S. sanctions will not hinder the import of the test kits, and the Korean company will receive the money," the Iran International report, citing the letter, asserted.

However, the deal was halted by the paramilitary Basij Organization, the letter indicates, which held the equipment and the fund for the devices and 300 test kits "hostage" on the condition that the organization "would receive the exclusive right to distribute the product."

In this Sunday, April 5, 2020 file photo, volunteer women wearing face masks to curb the spread of the new coronavirus prepare fabric to sew bed sheets for hospitals, at a mosque in Tehran, Iran. (AP)

The letter underscores that the Korean and Iranian companies requested mediation from senior IRGC commanders and, subsequently, the project was suspended, and the Korean company did not receive its money.

In the meantime, the EIKO is reported to have moved in and signed an agreement with the Seoul company, without a permit from the Health Ministry.

Alex Vatanka, director of the Iran Program at the Middle East Institute, told Fox News that "corruption is so widespread inside the ranks of this Islamist regime in Iran that different factions use it to attack each other."

"The pandemic showed that the leaders in the Islamic Republic always want to skirt responsibility, and there was plenty of blame-shifting on this occasion," he said. "The regime is desperate for hard cash; it has looked to any and all sources possible."

All the while, Iranians continue to die in large numbers as a result of the highly contagious infection.

Firefighters disinfect a street against the new coronavirus, in western Tehran, Iran, Friday, March 13, 2020. The new coronavirus outbreak has reached Iran's top officials, with its senior vice president, Cabinet ministers, members of parliament, Revolutionary Guard members and Health Ministry officials among those infected. The vast majority of people recover from the new coronavirus. According to the World Health Organization, most people recover in about two to six weeks, depending on the severity of the illness. (AP Photo/Vahid Salemi)

Iran International now says it has become the target of a propaganda campaign by Tehran, which accuses the outlet of "creating obstacles for the import of medical equipment."

"The ministry also published a receipt that they claimed was for buying test kits from South Korea, but due to Iran International's report, it was blocked by U.S. sanctions," the publication wrote on its website. "However, the date on the receipt is long before the publication of the report."

When reached for comment by Fox News, Mico BioMed vehemently denied any wrongdoing.

"MiCo BioMed did not export (products) to Iran and did not violate the sanctions against Iran," a company representative said in a statement on Wednesday. "MiCo BioMed planned to send the allowed supplies, humanitarian supplies only."

The company, based in South Korea, has been lauded for its fast development of a DNA/RNA detection device "the size of a toaster that can provide rapid and reliable results in an hour," and as of late March was seeking regulatory approval for use in Europe.

But exactly where the murky line is drawn between sanctions violations and aid remains to be seen. The U.S. State Department did not immediately respond to a request for comment as to whether there were any investigations pertaining to the U.S. sanctions breaches concerning the medical sector.

The issue of whether or not U.S.-imposed sanctions are hindering the ability of the regime to deal with the coronavirus has sparked debate among U.S. lawmakers, foreign policy analysts and human rights activists.

The Trump administration and State Department have repeatedly insisted that the sanctions, which were reinstated on the oil sector and other key industries, do not impact the health and humanitarian stratum.

"We have repeatedly said that U.S. sanctions do not impede the Iranian regime's response to the COVID-19 crisis," State Department spokesman Morgan Ortagus said last month, underscoring that the sanctions still permit the sale of food, agricultural commodities, medicine, and medical devices, so long as "such transactions do not involve persons designated in connection with Iran's proliferation of weapons of mass destruction or support of international terrorism."

However, reports from the U.S. Treasury Department do indicate a decreased number of approved licenses for companies exporting medical goods to Iran. Roll Call reported that items requiring special authorization "include oxygen generators, full-face respirator masks, and thermal imaging equipment, all of which are needed to treat patients and keep medical workers safe."

Nonetheless, Tehran has repeatedly called for a lifting of the sanctions against them, bemoaning that the U.S. is committing "economic terrorism" and is to blame for the spread of the disease. The U.S. State Department has referred to this as "Iran's Sanctions Relief Scam," aimed at attracting foreign support to have the restrictions lifted, and pointed out that it has offered from the beginning to assist Iran in their coronavirus response – but the olive branch was turned away.

"There is no need to skirt sanctions for medical goods. The U.S. has made broad exceptions and authorizations that allow for the commercial sale and export of food, humanitarian goods, including medicine and medical devices, to or from Iran," said Claire Jungman, chief of staff of United Against Nuclear Iran (UANI). "The U.S. government has made numerous offers to help Iran with the coronavirus outbreak. Rather than accept, Iran has accused the U.S. of engineering the virus as a biological weapon and has even said that medicine from the U.S. could spread the disease or make it last longer."

Jungman highlighted that, since 2012, Iran has "spent over $16 billion to fund its terrorist activities while its health care industry has remained underfunded."

"Last year, Iran's health minister resigned in protest of the health care budget cuts," she surmised. "Any hindering of the Iranian health sector has been caused by Iran's leadership, not U.S. sanctions."

On the same token, Iranian President Hassan Rouhani has praised the "significant progress" made against coronavirus and has been steadily opening up the financial apparatus of the country after weeks under lockdown.

Accurate figures on exactly how many Iranians have been infected with coronavirus, and succumbed to it, is unknown. Officials data claims that just over 101,000 are known to have had the virus, with some 6,400 dying as a result of it. However, a government opposition group known as the NCRI documented that, as of Wednesday afternoon, more than 39,500 Iranians have died in 314 cities nationwide.

FILE — In this Saturday, March 7, 2020 file photo, a cleric, right, assists a medic treating a patient infected with the new coronavirus, at a hospital in Qom, about 80 miles (125 kilometers) south of the capital Tehran, Iran. Nine out of 10 cases of the virus in the Middle East come from the Islamic Republic. (Mohammad Ali Marizad/Rasa News Agency via AP, File)

Some experts point out that low official numbers are part of a government coverup to downplay just how hard the illness has hit, while others contend that they simply have not had the resources to adequately diagnose.

But as calls ratcheted up for the White House to at least temporarily relax the sanctions to enable the Islamic Republic to deal with the public health calamity, 50 former senior officials and Iran experts banded together to send a letter to President Trump, emphasizing how Tehran has "misused funds for malign activities instead of helping its own population."

"The scale of the crisis in Iran has nothing to do with U.S. sanctions; rather, it has been exacerbated by the regime's mendacity in addressing the pandemic," the letter states. "With reports that Tehran continues to plot attacks targeting U.S. forces, now is the time to double down on the maximum pressure campaign to force the mullahs to spend their money on the Iranian people, not their nuclear ambitions, imperialism, and internal oppression."