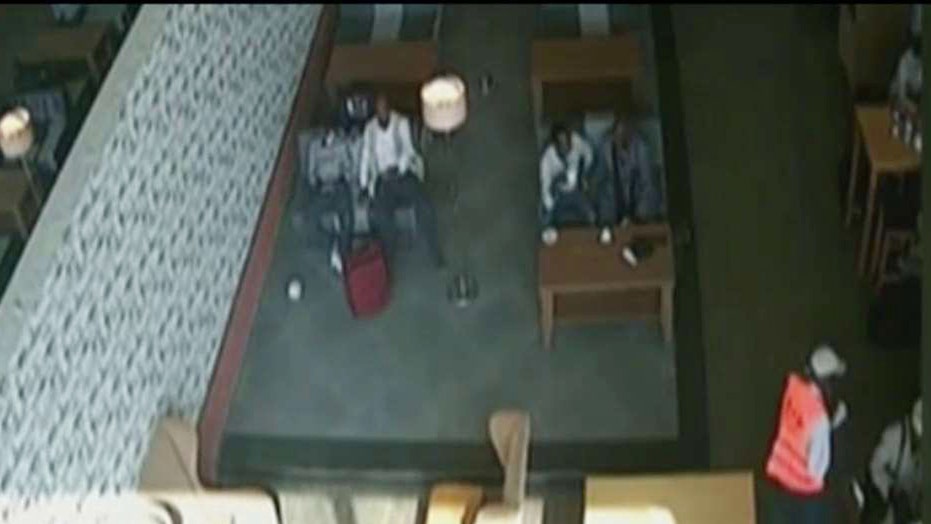 Surveillance video that investigators believe captured the handoff of an explosive-wired laptop that blew a hole in the side of a Somali jetliner could prove the bombing was an inside job, sources told Fox News.

The explosion on board Daallo Airlines Airbus A321 at 11,000 feet Tuesday killed the suspected bomber, who was sucked out of the plane, and forced an emergency landing.

A source close to the investigation showed Fox News the security video from Mogadishu’s airport, which shows two men, one an airport worker in an official reflective vest, passing the laptop to the bombing suspect in the airport terminal after he passed through a security checkpoint and shortly before he boarded.

The source said investigators, including several from the FBI brought in at the Somali government’s invitation, believe they have identified that all three men. They are believed to be from Hargeisa, in the disaffected area of Somaliland, which has been contesting sovereignty with the Somali government. That is a departure from initial suspicions that the bombing was carried out by the Al Qaeda-linked Islamist terror group Al Shabaab.

In the security video, an airport worker in a branded vest and a man casually dressed in white shirt and trousers, are first seen walking from the top to the bottom of the picture, along a walkway to the side of one of the airport’s open departure lounges. The man in the white shirt can be seen carrying a small laptop. Passengers can be seen waiting for their flights. This whole area is known as ‘airside’ – accessible only to passengers and airport staff who have gone through comprehensive security checks, including X-ray machines.

Security in Mogadishu’s airport is tight. In conjunction with Somalia’s National Security Agency, it is run by Turkish officials, as a Turkish aviation company manages the airport. It’s believed security staff are trained and constantly advised by both UN and U.S. specialists.

Moments later on the video, a lone person who investigators believe is the man who carried the laptop on board, and later fell to his death can be seen walking slowly toward the camera along the walkway. The man in the white shirt and the man in the airport vest come back into the picture from the bottom of the frame, stop the passenger, and hand him the laptop. All three men move off within seconds, the man in the security vest talking on a cellphone.

Fox News has learned several airport officials have been arrested in connection with the blast.

The Daalo jetliner was en route to Djibouti when the bomb exploded, making a door-sized hole in the fuselage on the starboard side, and ejecting the man thought to have brought the laptop on board. After the explosion, passengers donned oxygen masks and air could be heard rushing through the hole, according to video taken by a passenger.

The other 74 people aboard the plane were uninjured after the plane made an emergency landing.

“It was my first bomb; I hope it will be the last,” Capt. Vlatko Vodopivec, the pilot, told AP by phone from Mogadishu.

He said the blast happened when the plane was at around 11,000 feet and still climbing to its cruising altitude of 30,000 feet. “It would have been much worse if we were higher,” he added.

The Daallo flight was several hours late when it took off. If the aircraft had taken off on time and the blast occurred at cruising altitude, the result would have been catastrophic, according to experts. Last year, all 224 aboard a Metro Airlines flight, also an Airbus A321, perished when a bomb detonated once the aircraft reached cruise altitude over the Sinai.

One Somali flight on the same route earlier in the day was cancelled, for what officials said were security reasons. Several passengers who had been booked on that flight had transferred to the Daallo flight.

But sources in Mogadishu say the airline that canceled the flight had been notified that a possible terrorist attack was imminent. If those claims turn out to be true, it will raise obvious questions as to why Daallo Airlines was not warned of a possible threat.

Paul Tilsley is Breaking News correspondent for Fox News Channel in Africa, based in Johannesburg. Follow his coverage @paultilsley