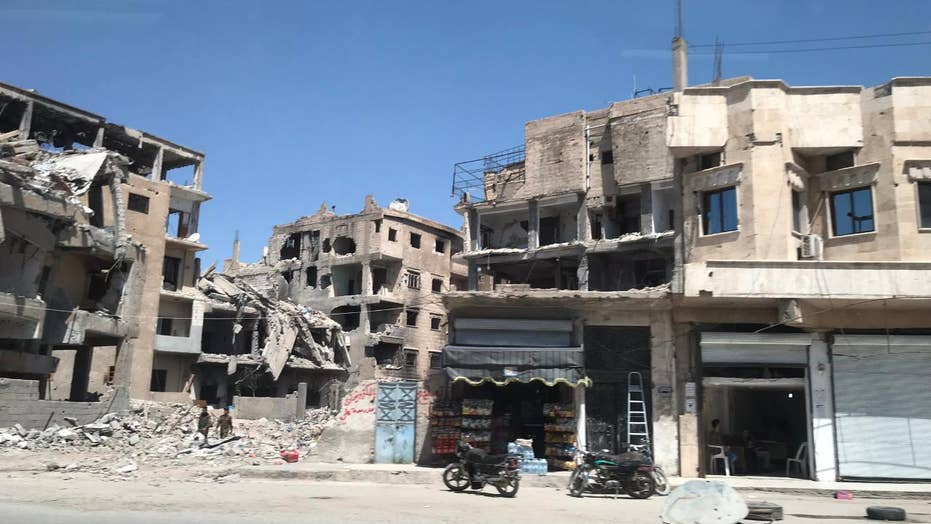 Raqqa, Syria is slowly rebuilding after liberation from ISIS

A look inside war-torn Raqqa, Syria after its liberation from ISIS control. The population is returning and rebuilding the ravaged city.

RAQQA, Syria – More than seven months since ISIS operatives were defeated in their “caliphate” capital of Raqqa, Syria the city remains something of an apocalyptic wasteland, only beginning to recover from nearly four years of brutal occupation.

“The situation is very bad; the mines continue to explode almost daily. Mass graves are exposed almost weekly,” Sarmad al Jilane, founder and former CEO of activist group Raqqa is Being Slaughtered Silently, told Fox News. “But the most difficult moments are the memories – the murders in the public squares, and the scenes of people having to watch will always be stuck in our minds.”

The United Nations estimates that 80 percent of the buildings in Raqqa have been razed or damaged. Bodies are still buried deep beneath the rubble. Sleeper cells still lurk in the area, and occasional car bombs claim more lives. There is next to no electricity and water. Phone lines are down, and it is a place where every step could be your last.

ISIS was infamous for planting homemade landmines and setting booby traps everywhere from homes and streets to sewage pipes, on corpses and even inside children’s toys to ensure their legacy permeated long after they were squeezed out. According to Human Rights Watch, between October 21, 2017 and January 20, 2018, mines injured or killed at least 491 people, including 157 children.

Residents sometimes erect small skull signs near places where they have spotted an unexploded mine, in a quest to warn people to stay away until an expert can come and clear. It is just one of the many wincing reminders of the years of ISIS occupation.

"More than hundreds of civilians have been killed by the landmines. People who are outside of Raqqa are still trying to come back but most of the city is gone," lamented Raqqa native Hussam Eesa. "Unfortunately, there is no future for Raqqa so far."

Dust swirls along the crooked Raqqa roads, lined with small shacks set up as makeshift checkpoints manned by troops with the Syrian Democratic Forces (SDF), the U.S.-backed group that drove ISIS from the city. Large black holes gouge the city’s roads, grimly exposing the underground tunnel system ISIS operatives built to evade detection, shield their weapons and spoils of war.

Around 150,000 residents are estimated to have returned to Raqqa, which had a pre-war population of almost 300,000. Tiny children patter through the destruction, many having bared witness to beheadings and crucifixions. The city center’s al-Naeem traffic circle still exhibits hallmarks of blood and dents from when dissected heads were showcased.

In late April, locals made their mark by holding the first soccer match since liberation, in their mortar-scarred outdoor field. But beneath what has long been called the Black Stadium, due its dark coloring, some of the greatest ISIS-inflicted miscarriages of justice took place.

The sprawling array of locker rooms, showers and board rooms were converted into a prison of torture cells and execution chambers. Blood still stains the walls. Scrawled graffitti indicates the names and dates of inmates’ deaths. Iron straps used to hold victims down or hang them upside down still swing from the bullet-cracked roof.

And from the city center Omar Ibrahim, 78, told Fox News he has lived in Raqqa for 50 years – including under ISIS rule – and that he and his son Yousif have re-opened their local store. But business is hard to come by.

“Our houses were destroyed; this is all we have. It is too expensive for people to buy anything here, we are all poor,” Ibrahim lamented. “We can only hope good things might come to us. The most important thing is safety. We want to just live in peace.”

Others expressed extreme upset over something that, on the surface, may seem small considering all they had endured – but was a symbol of the desire to return to a life and place with dignity.

“Every day we bring our own tank of water to clean the streets, but someone late at night keeps coming and dropping their trash here. We need someone to come and punish them for this, we need a government and we need rules,” an exasperated Abu Mohammad, a 38-year-old shopkeeper said. “We are used the destruction here now, but there is no need to put trash in the streets. Summer is coming – and we don’t want the smell to get worse.”

For those tasked with such municipality chores and putting all the pieces of the broken city back together, cleaning rebuilding still seems like a faraway fantasy – security and stabilization remains at the forefront.

“We are faced with big mine fields, the background of the city is destroyed totally, and people’s psychology and morale is very wounded,” Leila Mustafa, a civil engineering professional turned co-chair of the Raqqa Civil Council (RCC). “But we have achieved some good things.”

Mustafa – who spends her long days in and out of meetings with residents from every walk of life – stressed that they had re-opened more than 200 schools and 70 bakeries, and that more than two million tons of trash and debris, as well as some 600 bodies, had been taken from the streets.

Yet the future of Raqqa, and how and if it will ever really return to the place it once was, hangs in question. Even though the U.S. is reported to have already spent more than $60 million on helping resurrect critical infrastructure post-ISIS, the Pentagon has said the United States had no defined role in reconstruction efforts. And in late March, the Trump administration froze a $200 million fund earmarked for aiding northwestern Syria. Trump also has vowed to soon withdraw all American troops – of which there are around 2,000 – from the region.

Many Raqqa locals fear either an ISIS resurgence or the return of the Syrian government's Assad regime if the U.S. pulls out. And the tension between some of the population and its liberators is palpable.

While the SDF is a mixture of ethnicities and religions, it is primarily led by the Kurds. Raqqa, meanwhile, is an almost entirely Arab city. Adding to the anxiety is the notion that many of Raqqa’s young male population, under the age of 32, are now obligated to join the SDF military – even if they already did their mandatory time in the Syrian Army. Thus many men hide away in homes to avoid being hauled off to the barracks.

But Havrin Khalaf, Secretary-General of the new “Future Syria Party” headquartered in Raqqa and officially formed on Nov. 30 last year, said their goal is to mitigate any hostilities, ensure the ouster of the Assad regime and to prepare not just Raqqa – but all of Syria – for those who fled to return.

“We wanted our base in Raqqa because these people have lived under the black flag, they know what it is to lose life and still want to live again,” she said.

Khalaf noted that they have been working with Syrians across the country, including secretly in regime-dominant areas to establish councils, as well as the diaspora abroad to gain support to re-build their devastated country and open a fresh chapter.

“Majority of the Syrian people do not accept this regime, the regime must fall down. But the problem isn’t only in one person– the entire system must be replaced,” Khalaf emphasized. “In the past, everything that was related to Syria was directed from one center in Damascus. But every town and city should have their own rights, we want a decentralized system, not a federal one.”