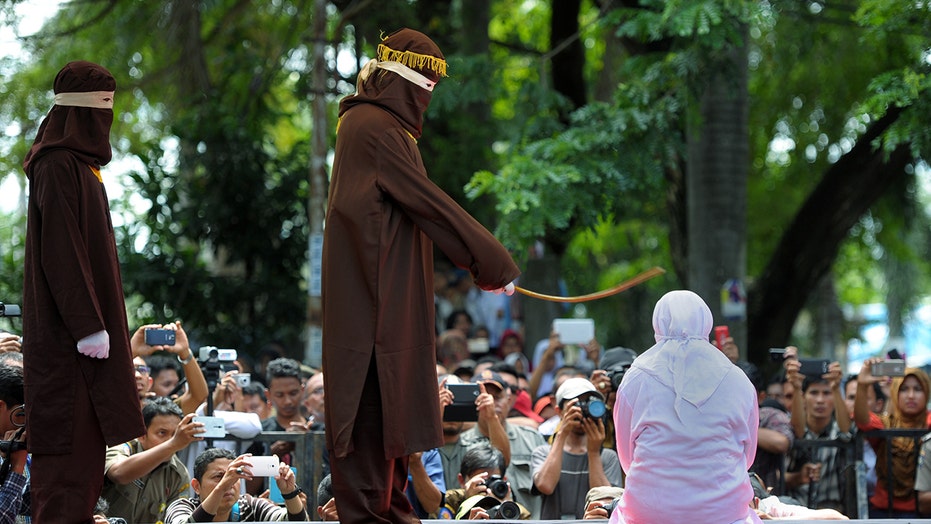 A female flogging unit has been introduced in Indonesia’s Aceh province to dole out public whippings against women found violating the region’s Sharia law.

One of eight new female Sharia officers delivered her first punishment to an unmarried woman who was found in a hotel room with a man who was not family, AFP reported Tuesday. The victim’s behavior is considered a morality crime in Aceh, where violators often face public whipping with a rattan cane.

US ENVIRONMENTAL REPORTER JAILED IN INDONESIA OVER VISA REGULATIONS

The officer, wearing a cloth mask and a brown, full-body uniform, appeared to hesitate before unleashing a burst of lashes on the woman’s back, according to the report. Officers who deal the lashes wear the uniform to protect their identities for security reasons.

"I think she did a good job. Her technique was nice," Banda Aceh Sharia police chief investigator Zakwan told AFP of the new recruit.

Men and women can face floggings for a range of offenses, including gambling, drinking alcohol, homosexuality and extramarital sex. (CHAIDEER MAHYUDDIN/AFP via Getty Images)

Aceh is the only region in Indonesia, the most populous Muslim nation, to follow Islamic law, which calls for women to punish female transgressors, the outlet reported.

Public flogging is also used against men and women found guilty of gambling, extramarital sex, and homosexuality, according to The Jakarta Post. The floggings can include more than 100 lashes; the victims sometimes faint from the pain.

The punishments have proven controversial, with human rights group Amnesty International calling the canings “cruel, inhuman and degrading” public spectacles, according to the outlet.

The Indonesian government allowed Aceh province to implement Sharia, or Islamic law, in 2001 as part of limited self-rule to pacify clamor for independence. (JEWEL SAMAD/AFP via Getty Images)

Indonesia’s president reportedly issued a call to cease public whippings. But a limited autonomy deal made over a decade ago between Aceh and the central government allows the province to follow the religious law.

Safriadi, head of Banda Aceh's Sharia Implementation Unit, told AFP that the female officers were trained in the correct technique to limit injuries and “have no mercy for those who violate God's law.”

"We're not aiming to hurt people by whipping them," he said. "The most important thing is the shaming effect on violators and spectators so they don't do it again."