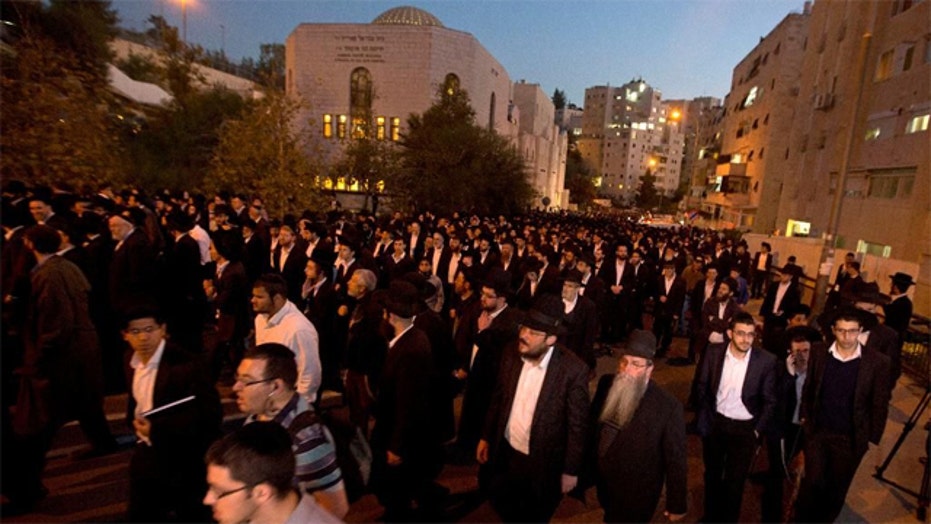 President Obama asks both sides to seek path towards peace

JERUSALEM – In razing family homes of Palestinian attackers, Israel is reviving a draconian punishment it largely halted a decade ago as ineffective and counterproductive.

Israel says it is resuming the demolitions — condemned by human rights groups as a violation of international law — because it needs more tools to stop a recent wave of Palestinian attacks on Jews.

Such arguments elicit anger and defiance in Arab neighborhoods of Jerusalem, home of six recent assailants, including two cousins who killed five people in a synagogue last week. Some residents said oppressive Israeli policies are to blame for growing tensions in the city.

Violence "will only stop when they end the occupation," said Enas Shalodi, 43, whose fourth-floor apartment near Jerusalem's Old City was wrecked by troops with hammers and explosives last week.

Her son Abdel Rahman, 21, drove his car into a Jerusalem train station Oct. 22, killing a 3-month-old girl and a tourist before being shot dead at the scene. His mother insists it was an accident, despite video showing the car slowing down, turning off the road and appearing to accelerate into the crowd.

Human rights groups say razing homes as a deterrent amounts to collective punishment and violates the rules that govern occupied territories, such as east Jerusalem — captured by Israel in 1967, along with the West Bank and Gaza.

"This is a deliberate policy of punishing the innocent," said Sarit Michaeli of B'Tselem, an Israeli human rights group. "This is completely unacceptable in a country that aims to be a democracy."

"We need more tools in our tool box," said Regev. "How does one deter an individual who doesn't care about his own life or the lives of people he is about to murder? The security services firmly believe that this can be an effective deterrent."

Israel has demolished hundreds of Palestinian homes as punishment since 1967, along with thousands more that were razed for other reasons, such as lack of building permits, which Palestinians say are difficult to obtain from Israel.

Between 1987 and 2005, a period encompassing two Palestinian uprisings, Israel destroyed 1,115 Palestinian homes as punishment, partially demolished 64 and sealed or partially sealed 417, according to B'Tselem.

In February 2005, Israel's then-defense minister, Shaul Mofaz, ordered demolitions suspended. An army committee concluded at the time that the practice had not deterred attackers but had instead inflamed hatred. The suspension came after four years in which Palestinian bombers and gunmen killed more than 1,000 Israelis.

Now tensions are rising again, particularly in Jerusalem, against the backdrop of growing Palestinian discontent. Palestinians in the city complain of official discrimination and fear Israel is marginalizing them further with settlements and a separation barrier slicing through Arab neighborhoods.

Religious passions among Muslims — the vast majority of the city's Palestinians — have been stoked by demands from some members of Prime Minister Benjamin Netanyahu's coalition to allow Jewish worship at a major Jerusalem shrine that is run by Muslims but is sacred to both faiths.

In this climate, lone Palestinian assailants have struck repeatedly in Jerusalem.

In August, the driver of a construction vehicle ran over and killed an inspector at a building site.

In October, a week after the attack by Shalodi, a waiter shot and severely wounded a rabbi who has been pushing for Jewish prayer rights at the contested holy site. In early November, a motorist slammed a minivan into a crowd waiting at a train station, killing two people.

All six assailants were shot dead by security forces on the spot and Netanyahu ordered their family homes demolished.

"The only solution is very strong deterrence of a pinpoint nature," said Peri, adding that house demolitions would have to be carried out quickly to be effective.

Shalodi's home was the first to be destroyed because his family did not appeal. The other five families have submitted appeals and will go to the Supreme Court if needed, their lawyers said.

Israel's high court has overwhelmingly ruled against Palestinian homeowners in the past, according to B'Tselem.

Enas Shalodi, her husband and six children lived in an apartment in a five-story building that houses six other families, all in-laws. The Shalodis have moved next door into a brother-in-law's apartment that is vacant until April or May, but she said she has no money to pay rent once her relatives reclaim their home. Her old apartment is gutted, with debris strewn on the floor and holes blown into outer walls.

The family of Oday Abu Jamal, 22, has already removed most belongings from their three-bedroom home in the Jabal Mukaber neighborhood.

This includes herself, her husband, four unmarried children, a sister-in-law and a bedridden mother-in-law. The elderly woman, bundled in blankets, lay on a bed in a dark room in the house.

Fatima said she had been unaware of her son's plan to attack the synagogue, describing him as a quiet young man who worked as a laborer. She blocked questions about the gruesome nature of his act.

In her grief, she appeared almost indifferent to the likely loss of her home.

"My son is gone," she said. "I want my son, not the house. They come to demolish the house? Let them."