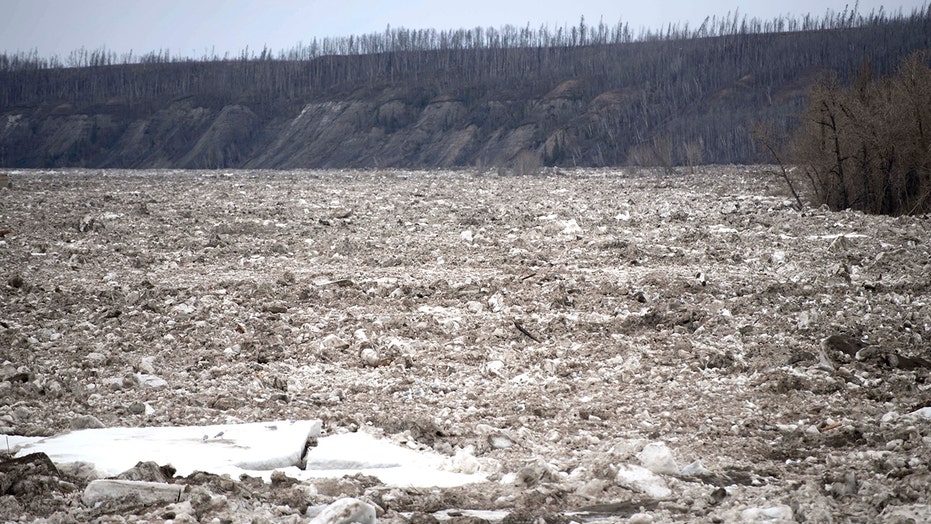 Up to 15,000 people in Canada have been told to flee their homes after an ice jam caused by a rapid spring thaw caused rivers in Alberta to flood, spurring one local official to call for military intervention to break up the flow.

The mandatory evacuation order was issued Monday in Fort McMurray after the city became threatened by fast-moving waters from an ice jam in the Athabasca River that broke loose over the weekend.

"Water levels are rising, and the situation can change quickly," city officials said.

Officials said the ice created a blockage of almost 15.5 miles long as it jammed along the Athabasca and Clearwater rivers, sending water into nearby communities.

Heavy ice and water could be seen flowing over an industrial side street in Fort McMurray on Monday.

Chunks of ice and water can be seen flowing onto a street near Fort McMurray, Alberta after an ice jam caused major flooding in the region. (Stu Salter via Storyful)

"There is no threat to this area at this time and we remain in constant communication with staff at the hospital," city officials said.

Ice on the Athabasca River near Fort McMurray, Alberta on Monday, April 27, 2020. (Chris Schwarz/Government of Alberta)

Aerial images showed the extent of the flooding in the region.

The mayor of the Regional Municipality of Wood Buffalo, Don Scott, said Monday he asked Alberta Premier Jason Kenney for fighter jets to bomb the ice in an effort to loosen up the jam.

In 2016, The Drive reported a similar tactic was used in Russia to break up a 25-mile-long ice jam. The Russian Air Force directed military jets to drop guided bombs on the blockage along the Sukhona River every hour until the river resumed its natural flow, which could be seen in videos posted to YouTube.

Scott told the Edmonton Journal that the possibility of military intervention was considered, but would not work for this "one-in-one-hundred-year flood."

“It’s the sheer size of the ice jam itself that prevents the military from using explosives,” Scott told the paper.

5 OF THE MOST DEVASTATING FLOODS IN US HISTORY

Kenney addressed the topic of military intervention on Monday in a video posted to Twitter.

"Apparently that was a tactic used back in 1972 and our river experts have looked at that very closely and are saying that would just not work in this situation," he said. "It would not displace the ice, it would just create tighter jams in some places."

"Ice-jam floods are very unpredictable and conditions can change quickly with little warning," he told reporters at a news conference in Edmonton. "There is no reasonable engineering solution to unlock the ice jams at this point. We have to rely on warm weather to soften the ice."