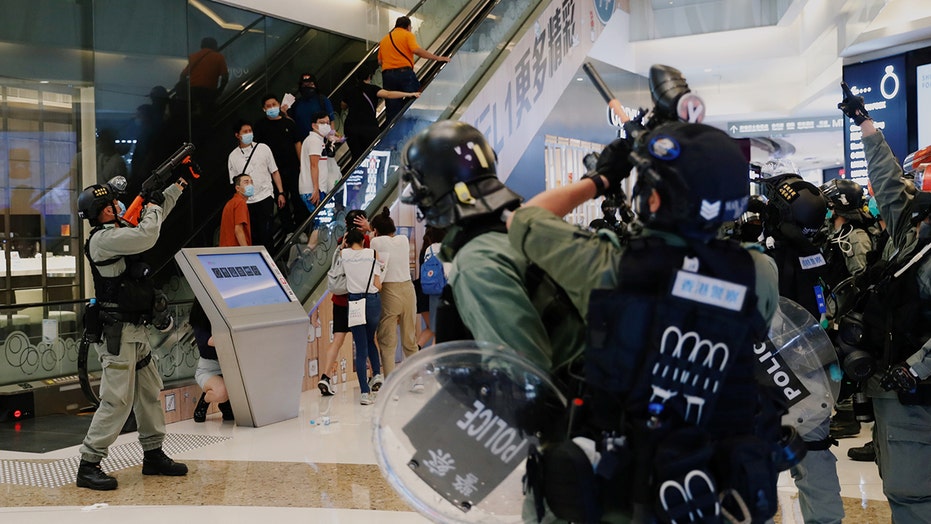 Hong Kong police arrested 230 people over the weekend during a chaotic pro-democracy protest that erupted amid the coronavirus outbreak.

Images captured by journalists showed riot police firing pepper spray at crowds participating in a sing-along demonstration inside a shopping mall on Sunday.

The clashes – which then spilled outside – were similar to the unrest that gripped Hong Kong for much of last year and reportedly left 18 people hospitalized.

Riot police raise their pepper spray projectile inside a shopping mall as they disperse anti-government protesters during a rally, in Hong Kong, China, on Sunday. (Reuters)

“The government has imposed restrictions on gatherings and turned it into a crackdown on freedom of assembly, not only for the human rights of citizens but also for other religious activities,” one demonstrator told Reuters. “I think this is a gross violation of human rights.”

The news agency reports that recent arrests of pro-democracy activists and concerns about Beijing’s influence have revived the movement, despite the ongoing pandemic.

CHINA RAMPS UP TENSIONS WITH HONG KONG IN NEW STATEMENTS

Police say they arrested people between the ages of 12 and 65 on Sunday for offenses including assaulting an officer and unlawful assembly. One 22-year-old man, they claimed, was in possession of materials believed to be intended for the production of Molotov cocktails.

A pro-democracy movement that paralyzed Hong Kong for months last year has shown signs of reviving in recent weeks as the coronavirus threat eases. In this photo, police arrest pro-democracy protesters on Monday. (AP)

The media was also caught in the crossfire, with the Hong Kong Journalists’ Association telling Reuters that some of its members were hindered from doing their jobs.

“Some journalists who were sprayed by pepper spray were not allowed to receive immediate treatment, and they were requested to stop filming,” said the group’s chairman, Chris Yeung.