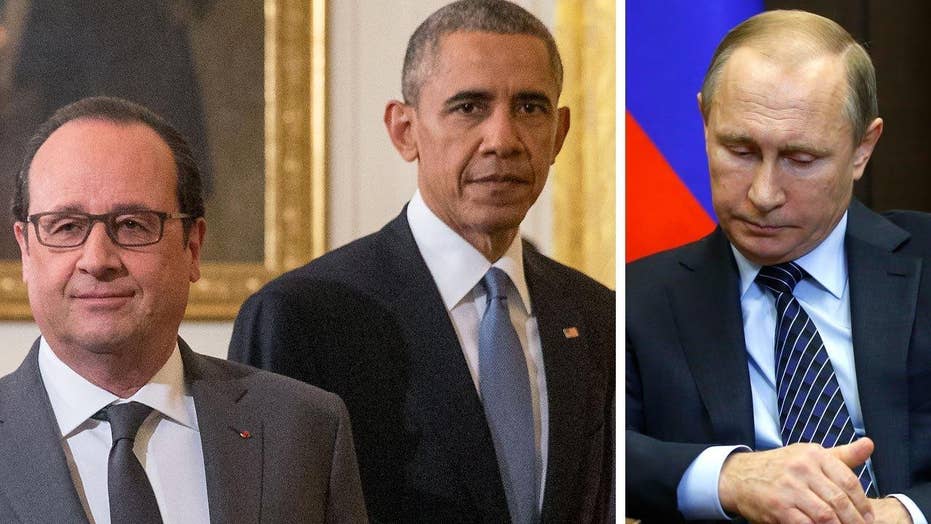 French President Francois Hollande and Russia’s Vladimir Putin agreed to share intelligence information and cooperate on selecting targets in the fight against the Islamic State group, raising hope for closer ties between Moscow and the U.S.-led anti-IS coalition following the Paris terror attacks.

Putin said that Russia is ready to more broadly coordinate its military action in Syria with the U.S.-led coalition, but he harshly criticized Washington for failing to prevent the downing of a Russian warplane by NATO member Turkey. Hollande said Tuesday’s shoot-down of the Russian jet was a “serious incident, obviously regrettable” that underlined the need for closer coordination between the nations which are fighting the IS.

“It is crucial in that period to avoid any risk, any incident, and prevent any escalation,” Hollande said at a news conference following the Kremlin talks.

“The only goal we must have is fighting Daesh and neutralize the terrorists, there is no other goal,” he said, referring to the IS by its Arab acronym.

IS has claimed responsibility for the Nov. 13 attacks in Paris, as well as deadly bombings in Beirut and the downing of a Russian airplane on Oct. 31 that killed all 224 people on board over Egypt’s Sinai Peninsula.

Hollande said he and Putin agreed to “increase information and intelligence exchange, intensify airstrikes against Daesh, which will be subject to a coordination to increase their efficiency” and make sure that “the forces combatting Daesh and other terrorist groups must not be targeted by our actions.”

Putin specified that Russia is ready to both cooperate bilaterally with France and with the U.S.-led coalition as a whole on the choice of targets, so that to “determine the territories which could be struck, as well as those that must be spared, exchange information on various issues and coordinate action on the battlefield.”

At the same time, the Russian leader harshly criticized the U.S. for the failure to prevent its NATO ally Turkey from shooting down the Russian military jet Tuesday at the border with Syria.

Turkey said it shot down the Russian Su-24 bomber after it flew into its airspace for 17 seconds despite repeated warnings.

Putin dismissed the Turkish claim and held the U.S. responsible for failing to rein in its ally, saying that Russia had informed the U.S. about its military flights in advance in line with a recent agreement between Moscow and Washington aimed at preventing clashes between their aircraft.

As the leader of the anti-IS coalition, the U.S. should have made sure that the Russian warplanes aren’t targeted by its members, Putin said.

“We proceed from the assumption that it will never happen again,” he said. “Otherwise we don’t need any such cooperation with any country.”

He denounced the Turkish action, saying it “thoughtlessly and rudely” destroyed friendly ties between the two countries.

Putin added that from now on Russia will protect its warplanes with the long-range S-400 air defense missiles deployed at its air base in Syria. The military will also be sending fighter jets to escort bombers over Syria, use electronic countermeasures and other means to prevent any hostile action in the future, he said.

Speaking about the Syrian conflict, both leaders emphasized the need for political process but held their ground on the fate of Syrian President Bashar Assad. Hollande underlined that “from France’s view, it’s clear that Assad does not have his place in Syria’s future,” while Putin said that the Syrian leader’s future “should be at the hands of the Syrian people.”

Putin said that Russia was mourning for Paris victims and those who died in the downing of the Russian passenger plane over Egypt. He praised Hollande’s efforts to build an anti-terror coalition and said that Moscow was open for stronger cooperation.

Hollande’s visit comes two days after he met with President Barack Obama in Washington, where both leaders vowed to escalate airstrikes against IS and bolster intelligence sharing.

Following his meeting with the French president, Obama said Russian cooperation in the fight against IS would be "enormously helpful." Both Obama and Hollande, however, insisted that a political transition in Syria must lead to Assad’s departure. Russia, on the other hand, has been Assad’s staunchest ally.

Last week, Hollande called for the U.S. and Russia to set aside their policy divisions over Syria and "fight this terrorist army in a broad, single coalition." But his office acknowledges that "coordination" sounds like a far more realistic goal.

Hollande’s task became even more arduous after the shoot-down of the Russian plane by Turkey, which underscored the complex military landscape in Syria, where a sprawling cast of countries and rebel groups are engaged on the battlefield and in the skies overhead, sometimes with minimal coordination.

With two suspects of the Paris attacks at large, tensions were still high in Belgium on Thursday with the capital, Brussels. But authorities lowered the threat level in Brussels to the second-highest level.

Since Saturday morning, Brussels _ home to the European Union and NATO headquarters _ had been wary of a threat that was considered "serious and imminent."

The lowering of the threat level came as a surprise, since the government had said that it would likely keep the highest threat level in the capital through the weekend.

Authorities launched a raid in southern Belgium on Thursday afternoon linked to the Paris attacks, but didn’t detain any suspects.

In Brussels, a civil protection squad decontaminated several people as a precaution at the main mosque after a suspicious parcel arrived. The person who opened the package discovered white powder and immediately contacted authorities. A specialized crew from the fire department was sent, witnesses at the scene said.

In Germany, Chancellor Angela Merkel's Cabinet decided in the wake of the Paris attacks to send reconnaissance aircraft, tanker planes and a warship to help in the fight against IS. Defense Minister Ursula von der Leyen told reporters that the government had also agreed to provide satellite surveillance.

During Merkel's visit in Paris on Wednesday, Hollande had said it would "be a very good signal in the fight against terrorism" if Germany could do more against IS in Syria and Iraq.

Von der Leyen said the warship would help protect France’s aircraft carrier in the eastern Mediterranean and the tanker planes could help refuel French warplanes in the air. The satellite surveillance could provide important information on IS and also help protect civilians with precise information.

The reconnaissance aircrafts will also support France in its fight against Islamist extremists.

Von der Leyen said that France had asked for help and that “the government has decided on these difficult, but important and necessary steps ... with the awareness that we are firmly on the side of France.”

Germany currently provides weapons and training for Kurds fighting against IS in Iraq.

The decision still needs parliamentary approval, but it was expected to not meet much resistance by lawmakers.