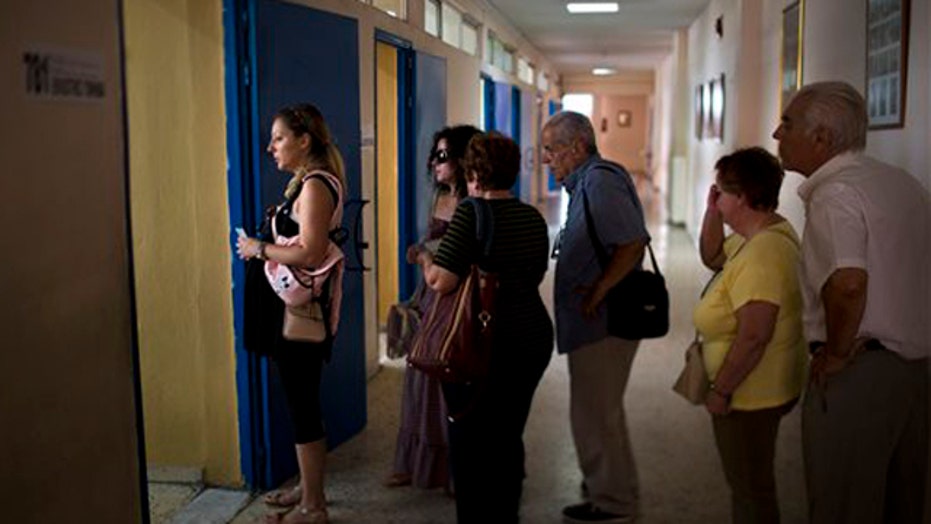 Greek Interior Ministry projects 'No' has won by 61 percent

Early poll results show Greek voters overwhelmingly rejected creditors' demands for more austerity in return for rescue loans in a critical referendum Sunday, backing Prime Minister Alexis Tsipras, who insisted the vote would give him a stronger hand to reach a better deal.

Tsipras gambled the future of his 5-month-old left-wing government on the vote. The opposition accused him of jeopardizing the country's membership in the 19-nation club that uses the euro and said a "yes" vote was about keeping the common currency.

With 70 percent of the votes counted, the "no" side had more than 60 percent. The interior ministry predicted that margin would hold.

Finance Minister Yanis Varoufakis said Sunday night that creditors planned from the start to shut down banks to humiliate Greeks and force them to make a statement of contrition for showing that debt and loans are unsustainable.

On Sunday night's result, he said that "'no' is a big 'yes' to democratic Europe. It's a no to the vision of Europe an infinite cage for its people. It is a loud yes to the vision of the Eurozone as a common area of prosperity and social justice."

Thousands of government supporters gathered in central Athens in celebration, waving Greek flags and chanting "No, No, No."

"We don't want austerity measures anymore, this has been happening for the last five years and it has driven so many into poverty, we simply can't take any more austerity," said Athens resident Yiannis Gkovesis, 26, holding a large Greek flag in the city's main square.

Governing left-wing Syriza party Eurodeputy Dimitris Papadimoulis said that "Greek people are proving they want to remain in Europe" as equal members "and not as a debt colony." The referendum was Greece's first in 41 years.

Minister of State Nikos Papas, speaking on Alpha television, said it would be "wrong to link a 'no' result to an exit from the eurozone. If a 'no' prevails that will help us get a better agreement."

Tsipras' high-stakes brinkmanship with lenders from the eurozone countries and the International Monetary Fund resulted in Greece defaulting on its debts this week and shutting down its banks to avoid their collapse. He called the referendum last weekend, giving both sides just a week to campaign.

"Today, democracy is defeating fear ... I am very optimistic," Tsipras said earlier in the day after voting in in Athens.

European officials had openly urged Greeks to vote against the government's recommendation. The leaders of Germany and France called for a European Union summit Tuesday to discuss the situation.

"I hope people say 'yes,'" European Parliament President Martin Schulz told German public radio. "If after the referendum, the majority is a 'no,' they will have to introduce another currency because the euro will no longer be available for a means of payment."

Belgian Finance Minister Johan Van Overtveldt was one of the first eurozone ministers to react to the initial results.

"This likely 'no' complicates matters," he told Belgium's VRT network, but insisted the door remained open to resume talks with the Greek government within hours.

The vote was held amid banking restrictions imposed last Monday to halt a bank run, with Greeks queuing up at ATMs across the country to withdraw a maximum 60 euros per day. Banks have been shut all week, and it is uncertain when they will reopen. Large lines once again formed at ATMs on Sunday.

Daniel Tsangaridis, a 35-year-old Athens resident, said he didn't expect banks to reopen soon, despite a government pledge that they would do so Tuesday.

"It's not going to happen in the next 48 hours," he said. "If the situation improves and we can have a deal, then the banks will open."

The Syriza party came to power in January after a six-year recession. Since then, the standoff between Athens and its international lenders has grown more bitter, and early signs of some economic growth and recovering employment in Greece have disappeared.

Polls published Friday showed the two sides in a dead heat with an overwhelming majority — about 75 percent — wanting Greece to remain in the euro currency.

The sense of urgency was palpable as Greeks struggled to decipher a convoluted referendum question after being bombarded with frenzied messages warning of the country's swiftly approaching financial collapse.

Neither result on Sunday, however, would lead to a clear answer on what Greece should do about its overstretched finances.

Greece is no longer in a bailout program since its previous package expired last Tuesday. It now has to negotiate a new one with its creditors that involves even more money for the government and banks and new economic austerity measures.

Despite the Greek government's assertion that a "no" vote will not lead to a euro exit, most experts agree it would open up more uncertain financial outcomes.

A number of European politicians, including Jeroen Dijsselbloem, the top eurozone official, have said a "no" vote would jeopardize Greece's place in the 19-nation eurozone. Investors are also likely to believe a "no" win increases the chance of a so-called "Grexit," where Greece returns to its own old currency.