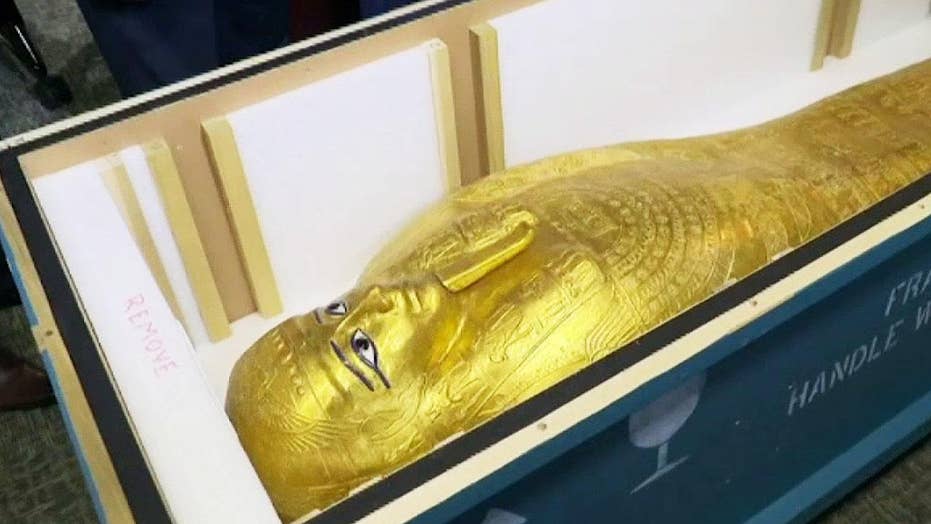 Centuries-old golden coffin is returned to its rightful owners

The gilded casket of high-ranking first-century priest Nedjemankh was returned to Egyptian officials in a repatriation ceremony after it was discovered the ancient artifact was actually stolen.

The centuries-old Gold Coffin of Nedjemankh was repatriated to Egypt this week after authorities determined it had been stolen and was on display at a prominent New York City museum, officials said.

The coffin was made between 150 and 50 B.C. and is worth some $4 million. It was displayed at the Metropolitan Museum of Art, Immigration and Customs Enforcement (ICE) said Thursday.

The Gold Coffin of Nedjemankh. (ICE)

"Coming as we do from all over the world, New Yorkers place a strong value on cultural heritage, and our office takes pride in our work to vigorously protect it," Manhattan District Attorney Cyrus Vance Jr. said. "Returning stolen cultural treasures to their countries of origin is at the core of our mission to stop the trafficking of stolen antiquities."

ICE's Homeland Security Investigations (HSI) New York unit and the Manhattan DA executed a search warrant at the museum in February. The museum fully cooperated when it was informed the coffin had been pilfered, ICE said.

Egyptian Minister of Foreign Affairs Sameh Hassan Shoukry accepted the artifact's return during a repatriation ceremony on Wednesday. It will be on public display in Egypt.

The Gold Coffin of Nedjemankh was presented to the Egyptian Minister of Foreign Affairs Sameh Hassan Shoukry, who accepted the piece on behalf of the people of Egypt. (ICE)

The highly ornamented coffin is inscribed for a high-ranking priest of the ram-headed god Heryshef of Herakleopolis, a Met museum website said. It was stolen from the Minya region in Egypt after the Revolution in October 2011, according to officials. It was later smuggled out of the country, restored in Germany and taken to France, where it was purchased by the Met in July 2017.

“The high-profit business of smuggling and trafficking antiquities has been around for centuries,” HSI Special Agent Peter Fitzhugh said. “But it is the responsibility of a buyer to confirm the proper provenance of a piece of art or antiquity."

The Gold Coffin of Nedjemankh was presented to the Egyptian Minister of Foreign Affairs in a repatriation ceremony. (ICE)