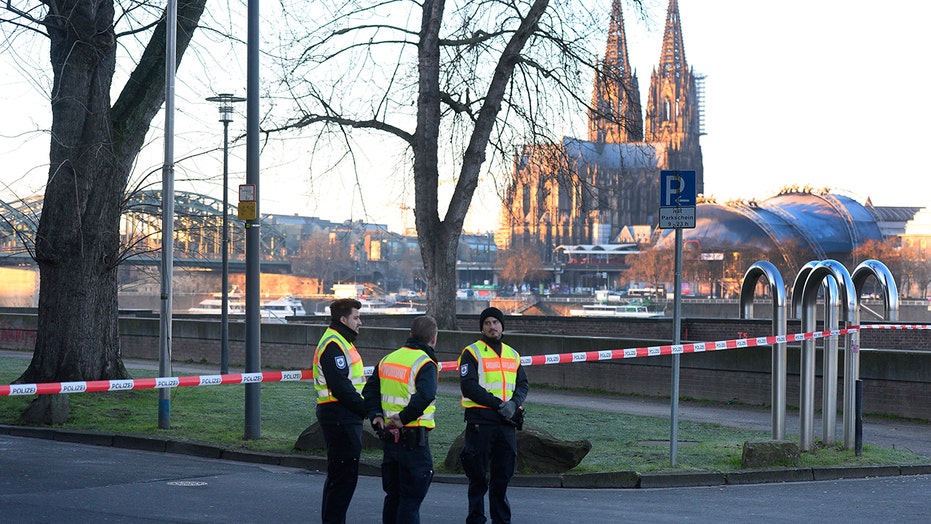 Evacuations and a transit shutdown were ordered in the German city of Cologne on Tuesday while experts defused an unexploded World War II-era American bomb, authorities said.

An excavator uncovered the 1,100-pound bomb on Monday evening during construction near the Rhine River in the center of the western city. The operation forced a nearby TV station, opera house and train station to evacuate.

GERMANY COULD HAVE WON KEY WORLD WAR II BATTLE IF THEY MADE THESE TACTICAL CHANGES, STUDY SAYS

Shipping on the river and air traffic overhead were also interrupted. A bridge that crosses the Rhine to Cologne’s main train hub was closed down, leading to train delays across all of Germany, while experts successfully defused the bomb.

The excavator that uncovered the bomb stands in front of the Hohenzollern Bridge in Cologne on Tuesday. (Roberto Pfeil/dpa via AP)

Unexploded bombs frequently are found in Germany – and elsewhere in Europe – since the end of World War II nearly 75 years ago. The familiar scenario is sometimes followed by mass evacuations.

Experts diffused two World War II-era bombs earlier this month in the city of Dortmund, about 60 miles north of Cologne, prompting a large-scale evacuation of about 14,000 people. They were 330-pound American and British bombs.

Employees of the public order office blocked a road close to the Cologne Cathedral on Tuesday as experts defused a World War II-era bomb. (Roberto Pfeil/dpa via AP)

Last year, a 1,100-pound World War II bomb was defused in Frankfurt after 16,500 people were told to leave their homes.

Elsewhere, a British World War II bomb containing 88 pounds of dynamite was defused at a movie theater in the southern Italian town of Brindisi last month after about 54,000 residents were evacuated.