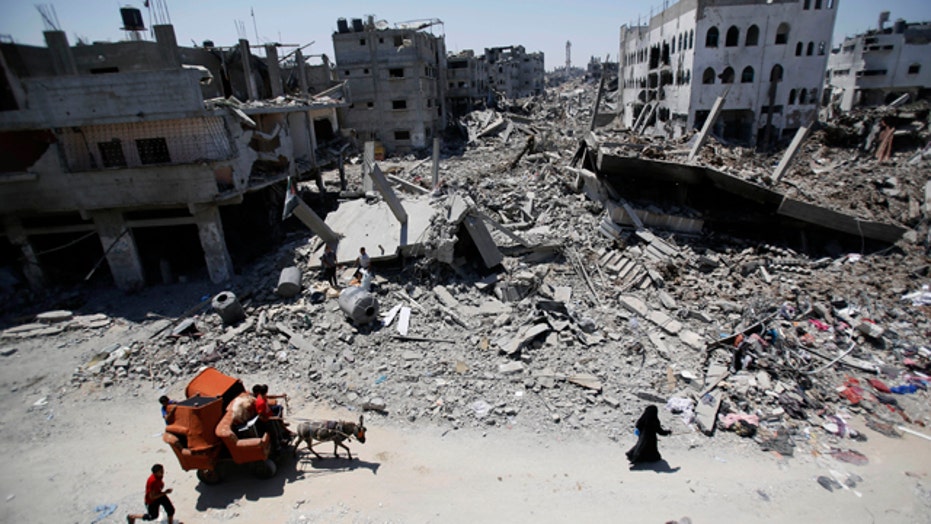 Talks being held in Cairo for a long-term Gaza cease-fire broke down Tuesday as Israel recalled its delegation hours after Palestinian militants broke an earlier truce by launching volleys of rockets.

The Israeli military said a total of 10 rockets had fallen Tuesday, including one that damaged a coffee shop in southern Israel.

Israel responded to the rockets by launching their own airstrikes in the Gaza Strip.

Palestinian officials in Gaza reported more than two dozen Israeli airstrikes. At least 21 people, including 14 women and children, were wounded in a strike that hit a building housing the offices of Hamas' Al Aqsa TV station in Gaza City.

The Israeli moves, coupled with the outbreak of violence, threw Egyptian efforts to arrange a long-term cease-fire into jeopardy.

The Israeli official, speaking on condition of anonymity because he was not authorized to talk to journalists, said the Egyptian-hosted talks with Hamas militants are based on the "premise" that there will be no violence. The talks face a midnight deadline.

There was no immediate Egyptian comment, but a Hamas official declared the talks over.

In Cairo, the head of the Palestinian delegation, which is comprised of various factions, said no progress had been made in Tuesday's talks, but expressed hope they could still succeed.

"We gave the Egyptians our final position. We are waiting for them to come back with a response," said Azzam al-Ahmed, a close aide to President Mahmoud Abbas.

There was no immediate claim of responsibility. But shortly before the launch, Hamas spokesman Fawzi Barhoum hinted of more rocket fire, saying: "If Netanyahu doesn't understand ... the language of politics in Cairo, we know how to make him understand."

In a statement Tuesday, Israel’s military accused Palestinian militants of violating a cease-fire and said it maintains "both defense and striking capabilities in order to address the renewed aggression."

Wide gaps remain on key issues in the cease-fire talks, including Israel's blockade of Gaza, its demands for disarmament of Hamas and Palestinian demands for a Gaza seaport and an airport.

In an apparent attempt to pressure Hamas, Egypt said early Monday it would co-host an international fundraising conference for Gaza — but only if a deal is reached first.

That appears to play into the hands of the West Bank-based Palestinian Authority, which is seeking to regain a Gaza foothold, seven years after Hamas ousted it from power in the densely populated coastal strip.

Hamas, whose officials are part of the Palestinian delegation in the Cairo talks, has emerged weaker from the month-long Gaza war.

The militant group finds itself pressured by both Egypt and the Palestinian Authority to accept a less than perfect deal with Israel, but needs to show the people of Gaza that the enormous sacrifices they endured in the fighting were not in vain.

A member of the Palestinian delegation said that Israel was offering to ease the Gaza blockade by opening border crossings to some goods and people, but was insisting that it retain the right to limit the imports of material like cement, and chemical and metal products, which Israel says can be used for weapons manufacturing.

Hamas fears the arrangement would allow Israel to retain the right to close the crossings whenever it wished and is pushing for more Palestinian input into such decisions.

The Palestinian official also told The Associated Press that Israel wants to put off for an unspecified date any discussion on the opening of a Gaza seaport and airport and the release of Palestinian prisoners held in Israeli jails.

The Palestinians, however, say they will only agree to postpone discussing the seaport and airport for "a month after a ceasefire agreement, with other issues like .... the prisoners," the official said. He spoke condition of anonymity because he was not authorized to discuss negotiations with the media.

He also said that Israel agrees to extend the maritime territory in which Gaza fisherman can venture out from three to six miles and eventually to 12 miles from the shore, but that it was standing firm against Hamas' demand for unsupervised exports from the strip.

The Gaza blockade, imposed after Hamas seized control of the territory in 2007, has greatly limited the movement of Palestinians in and out of the territory of 1.8 million people, restricted the flow of goods into Gaza and blocked virtually all exports.

Israel says the blockade is needed to prevent arms smuggling, but critics say the measures have amounted to collective punishment.

Jamal Shobaky, the Palestinian ambassador in Cairo voiced disappointment with the Israeli stance, particularly on the question of the blockade. "What the Israelis have offered so far in the talks is not removing the blockade but rather easing it," he said.

The latest round of Gaza fighting was precipitated by massive Israeli arrests of Hamas members in the West Bank in the aftermath of the abduction and killing of three Israeli teenagers in June. Their deaths were followed by the slaying of a Palestinian youth in Jerusalem in what was a likely revenge attack.

Since the war started with an Israeli air campaign on July 8, followed by the introduction of troops on the ground nine days later, many of the strip's structures have been destroyed and tens of thousands of people remain huddled in U.N. shelters.

Gaza Health Ministry official Ashraf al-Kidra said Monday the death toll from the fighting had jumped to over 2,000 Palestinians, the majority of them civilians, while U.N. officials, who often take more time to verify figures, put the number at 1,976. Israel lost 67 people, all but three of them soldiers.