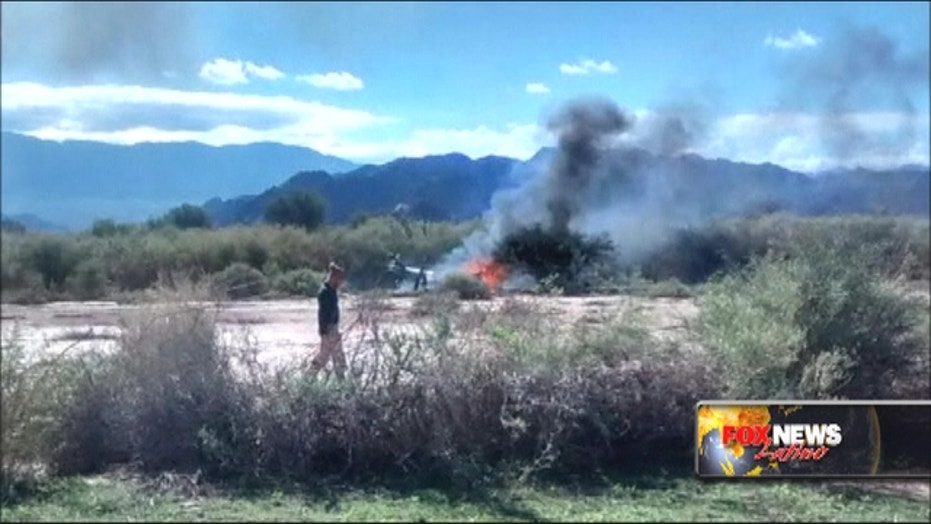 "An explosion occurred and it's believed that they collided," said Angulo, referring to the helicopters. Photographs showed the burning and smoking wreckage of the helicopters on the ground in dry scrubland, with people gathered nearby.

Among the dead were French Olympic gold medal-winning swimmer Camille Muffat, Olympic boxer Alexis Vastine and sailor Florence Arthaud, according to a statement from La Rioja's government. They were taking part in the reality show "Dropped."

The deaths are likely to place new attention on the risks involved with reality TV shows, which have been highly popular and sometimes involve taking celebrities and others to far-flung locations to faces challenges against the natural elements — both physical and mental.

Two years ago, TF1 — France's best-known private-sector network, which aired the show — canceled the remaining season of the "Survivor"-like reality show "Koh Lanta" after a 25-year-old participant died of a heart attack on the first day of filming.

French Prime Minister Manuel Valls said France's foreign ministry is in contact with authorities in Argentina to determine what caused the crash.

Adventure Line Productions, the show's producers, said in a statement, that its teams were "devastated and share the deep pain of the families and loved ones."

"We are in contact with the production teams on site (and) with the French and Argentine authorities. We will give more information as soon as possible," the producers added.

Angulo said one of the helicopters belonged to La Rioja province and the other belonged to neighboring Santiago del Estero province.

"The helicopter from La Rioja was a Eurocopter with a capacity to hold six people. It appears to have brushed against the other helicopter from Santiago del Estero shortly after takeoff," the statement from the provincial government said.

The crash occurred around 5:15 p.m. local time, according to the Argentine news agency Telam. The rugged, sparsely populated area is on the edge of the Andes mountain range that separates Argentina and Chile.

The news of the deaths plunged the French sports world into mourning.

"The brutal demise of our compatriots is an immense sadness," said French President Francois Hollande in a statement.

French Secretary of State for Sport Thierry Braillard said on the BFM TV channel, "Some had finished their careers and one was dreaming of gold in Rio. I'm profoundly saddened. French sport has lost three stars this morning."

"Camille was quite a shy and reserved person. She was discreet. But when it was time for a bit of a laugh she was always there," said Olympic gold medalist Amaury Leveaux. "French sport has lost a great champion."

Richard Papazian, the president of the Nice swimming club in southern France where Muffat used to swim, could barely contain his emotion.

"I could not believe it and then the news was confirmed. What a terrible tragedy," said Papazian on BFM television, his voice cracking. "I had a lot of affection for Camille. I can't find the words. It's a terrible destiny."

Vastine won a bronze medal at the 2008 Games in Beijing, but his semifinal loss to Manuel Felix Diaz was hit by controversy as he was docked points by the referee in the final round. Vastine broke down in tears after the defeat.

In 2012, he lost in the quarterfinals at the London Games also amid controversy when he drew on points against Taras Shelestyuk of Ukraine but lost on the countback rule, thus missing out on a medal.

Arthaud, who was 57, was a pioneer in sailing. In 1990, she won the famed Route du Rhum race — a trans-Atlantic single-handed yacht race between Brittany and the Caribbean islands of Guadeloupe — on her boat Pierre 1er.

Former France and Arsenal striker Sylvain Wiltord, ice skating champion Philippe Candeloro, former Olympic swimming champion Alain Bernard and veteran cyclist Jeannie Longo are among the other French athletes who took part in the show, but none was involved in the accident.

"I am sad for my friends, I'm trembling, I'm horrified, I don't have words. I can't say anything," Wiltord tweeted.

Candeloro, in a statement on his Facebook page, said he is "extremely shocked."

Other French athletes spoke of their sorrow over the loss.

"I don't have words to express the pain I feel, the tears are flowing and won't stop," said former French sprinter Muriel Hurtis — a gold medalist in the 4 x 100 relay at the 2003 world championships.

The crew had arrived on Sunday in Villa Castelli, where it had previously filmed a version of "Dropped" for Switzerland and Denmark, said the mayor of Villa Castelli, Andres Navarrete.