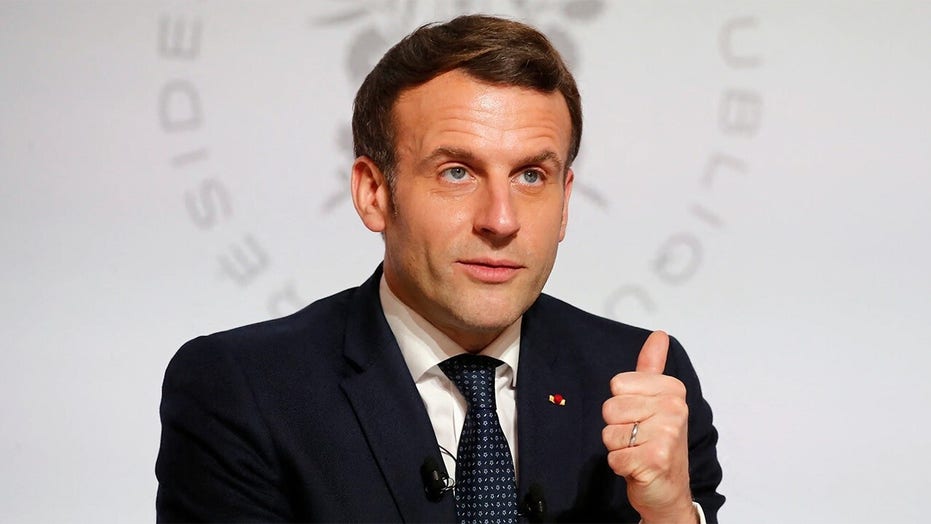 French president warns against telling Europeans what words to say and not to say; author Douglas Murray reacts on 'Fox & Friends.'

A mosque in northern France has been shut down after the government determined that the place of worship was "inciting hatred" against Christians and Jews, as well as gay people.

Interior Minister Gérald Darmanin announced earlier this month that his administration was in the process of shutting down the mosque. The mosque was accused of hosting a regular speaker that pushed its members toward violent radicalization, according to translations provided by EuroNews.

Darmanin claimed that the mosque's speaker was "presented as an occasional speaker but who, in reality, acts as a regular imam." He reportedly made comments to the congregation that "glorify jihad and the fighters, whom he describes as heroes."

TREASURY AUTHORIZES WORKING WITH TALIBAN TO FACILITATE AID TO AFGHANISTAN

A lawyer for the nongovernmental organization Espoir et Fraternité (French for "Hope and Fraternity"), which operates the mosque, told journalists that the NGO would be filing a countermeasure with the courts within 48 hours.

A French police officer stands next to a portrait of French teacher Samuel Paty on display on the facade of the Opera Comedie in Montpellier on Oct. 21, 2020, during a national homage to the teacher who was beheaded for showing cartoons of the Prophet Mohamed in his civics class. (PASCAL GUYOT/AFP via Getty Images)

The organization defended the attendance and preaching of the unnamed imam at the center of the investigation, with their lawyer dismissing "certain remarks made during preaching by one of the mosque's imams – who has since been suspended – who was speaking on a voluntary basis."

Darmanin has been a point man for dozens of investigations into reportedly radical mosques across France.

The minister previously stated that 99 mosques have so far been controlled for advocating dangerous or violent ideology.

"Of these 99 [mosques], 21 have been closed, and 6 are currently in the process of being closed," Darmanin reported earlier in December, according to EuroNews. "We also found that 36 of these mosques had accepted the demands of the Republic – either to leave a particular federation, or to separate from the imam whom we considered dangerous, or to stop foreign funding, or unfortunately to combine these provisions – and so we removed them from the list."

The Daily Mail reported that earlier this year the French government announced it was cracking down on places of worship and groups suspected of pushing radical Islamic propaganda. The interior ministry revealed earlier this month that they had investigated 100 mosques and Muslim prayer halls in recent months out of more than 2,600 across France due to fears of "separatist" ideology being spread across the country.

The U.S. Treasury issued three new "general licenses" that will allow certain types of financial transactions with the Taliban and Haqqani Network, who have been largely shut out of the international financial system by American sanctions aimed at stopping terrorism and human rights abuses.

"Treasury has provided broad authorizations that ensure NGOs, international organizations and the U.S. government can continue to provide relief to those in need," Deputy Secretary of the Treasury Wally Adeyemo said.

The new actions come as Afghanistan faces an extreme humanitarian crisis, with more than half the population facing severe hunger as winter gets set to grip the country.