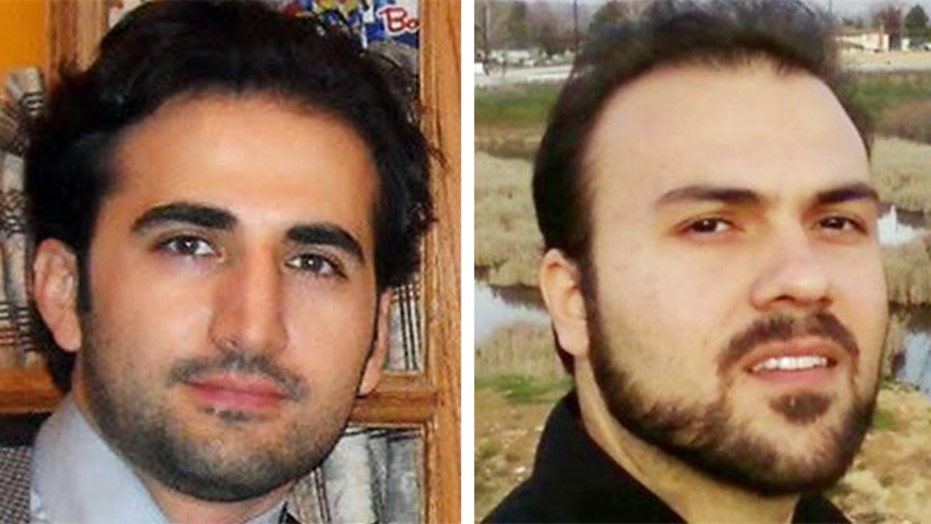 Does agreement with Iran include jailed Marine's release?

President Obama hailed 'historic understanding' on nukes, but have Americans being held in Iran like Marine Amir Hekmati or Christian pastor Saeed Abedini been left behind?

Supporters of four Americans believed to be held in Iran are hoping the "framework" for a deal between the West and the Islamic Republic includes freedom for the U.S. citizens.

Washington Post reporter Jason Rezaian, former U.S. Marine Amir Hekmati and Christian pastor Saeed Abedini are known to be held in Iranian prisons, while Robert Levinson, an American private investigator and former FBI agent who disappeared in Iran in 2007, is believed to be held inside the country, even though Tehran denies it has him. Supporters of the first three have pushed the U.S. to make securing their freedom part of the deal that could see the West drop international sanctions against Iran in exchange for assurances the hardline Islamist nation will stop pursuing nuclear weapons.

“We continue to urge the U.S. government to do all within its power to bring home American Pastor Saeed Abedini who is wrongfully imprisoned in Iran for his Christian faith,” Jordan Sekulow, executive director of the American Center for Law and Justice said Thursday, after President Obama announced the framework for an agreement had been reached. "It is critical that our government use this unique opportunity – as our two nations continue to sit at the negotiating table over the next few weeks and months – to bring Pastor Saeed and the other wrongfully imprisoned Americans home to their families.”

Although he did not mention the three prisoners or Levinson in remarks on Thursday’s agreement, President Obama recently stressed the importance of their release. On March 20, at the start of the Persian New Year, Nowruz, Obama made public statements in which he stated that the holiday offered the Iranian government the opportunity to reunite the men with their families.

“We call on them to show the international community that they are serious about their intentions..."

— The family of Amir Hekmati

"At this time of renewal, compassion, and understanding, I reiterate my commitment to bringing our citizens home and call on the government of the Islamic Republic of Iran to immediately release Saeed Abedini, Amir Hekmati and Jason Rezaian and to work cooperatively with us to find Robert Levinson so that they all can be safely reunited with their families as soon as possible," Obama said.

Rezaian, the Washington Post’s Tehran bureau chief, was arrested in July 2014 along with his wife, Yaganeh Salehi after the home was raided by Iranian authorities. Salehi was released in October but Rezaian is still being detained at the notorious Evin Prison—often referred to as Evin University for housing many political and intellectual prisoners. Nearly a year later, Rezaian has not received a trial and officials in Iran have not stated reasons for his detention.

FILE - This undated file photo released by his family via FreeAmir.org shows Amir Hekmati who has been detained in Iran for two years as of Thursday, Aug. 29, 2013, on accusations of spying for the CIA. On Aug. 29, 2013, his mother released a letter that she sent him indicating that the wait was almost unbearable but that the change in the Iranian presidency and the Aug. 28, 2013, U.S. State Department request for Hekmatis release gave her and the family hope that they might see him again soon. (AP Photo/Hekmati family via FreeAmir.org, File)

Hekmati was arrested in August, 2011, on allegations of spying for the CIA while visiting his grandmother and other relatives in Iran. In December of that same year, Iranian state television aired a videotaped confession from the leatherneck in which he had stated that that he had sneaked into Iran to establish a CIA presence. His family said at the time that he was coerced into making the statement.

In January 2012, Hekmati was sentenced to death, but the ruling was overturned two months later, after the Iranian Supreme Court ordered a retrial over an incomplete trial. Two years later, Hekmati is still awaiting retrial. His family also believes that the new agreement will provide a strong opportunity to bring him back home.

“Now that Iran has sat at the table next to the United States, working diligently to come to an agreement for a nuclear program, we ask Iran if they still consider the United States a hostile country and if they do not, perhaps it is time they open the prison gates and allow the Red Cross to visit Amir without guard and report on the status of his well-being,” the family of Amir Hekmati said in a written statement provided to FoxNews.com. “We call on them to show the international community that they are serious about their intentions and as an act of good faith, return Amir to his dying father, his worried mother, and the family the badly needs him.

April 11, 2013: Jason Rezaian, an Iranian-American correspondent for the Washington Post has been imprisoned for over a year with charges of espionage. (AP Photo/Vahid Salemi, File)

Abedini, an Iranian-American Christian pastor, has been imprisoned since 2012 and is serving an eight-year sentence on vague charges related to his faith. His family says he has endured torture, failing health and death threats. In July 2012, Abedini left his family in Idaho to go back to his native Iran to visit family and continue humanitarian efforts to build an orphanage. After visiting a nearby country, Abedini was traveling back into Iran to catch his flight back home to the U.S. when the Iranian Revolutionary Guard stopped his bus near the Turkey-Iran border and pulled him from the bus, confiscating his passports and subjecting him to intense interrogation in the process.

Abedini had started a house church movement in Iran, a network of underground churches for former Muslims who converted to Christianity.

Obama recently met with Abedini’s wife, Nagameh and assured her that the administration was making efforts to get her husband freed.

“President Obama has told our family that he considers securing the freedom of Saeed to be a ‘top priority’ and I continue to take him at his word,” Nagameh Abedini said in a statement that was also released after the agreement was announced on Thursday. “As we prepare to celebrate Easter, I want to thank the many people around the country and the world who are continuing to pray for Saeed's release.”

Also this week, Secretary of State John Kerry said that negotiations to release the Americans are continuing.

"I’m not going to go into any details except to say to you that that conversation is continuing,” Kerry said Thursday. “We have a very specific process in place to try to deal with it, and we call on Iran again, today, now, in light of this, to release these Americans and let them get home with their families. And we are working on that and we will continue to be very focused on it.”