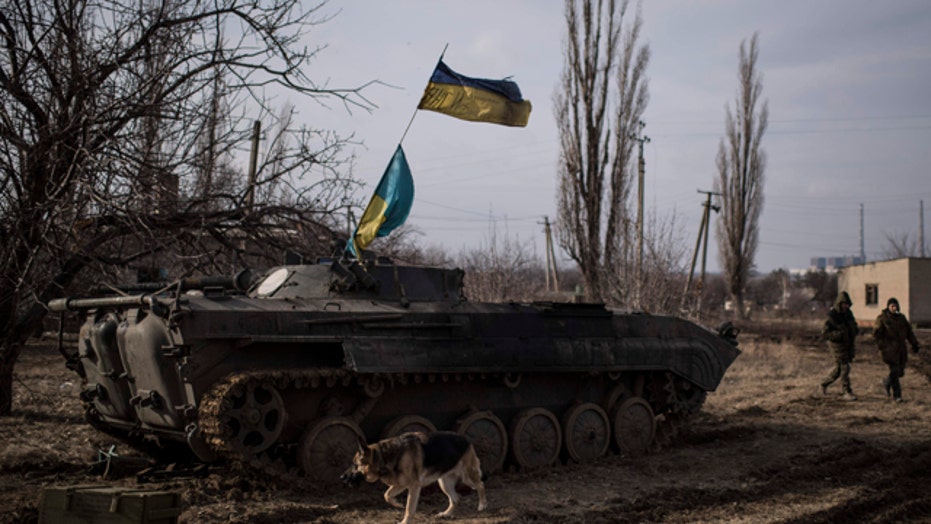 Latest round of shelling kills civilians

DONETSK, Ukraine – A powerful explosion rocked a chemical plant and set it on fire Monday outside the separatist stronghold of Donetsk in eastern Ukraine. Rebels said the plant was hit by government shelling.

No casualties or damage were immediately reported from the blast, which could be heard in downtown Donetsk. The city lies in the middle of Ukraine's industrial heartland and explosions like this have long been feared.

An armed conflict between Russia-backed separatists and Ukraine government forces has killed more than 5,300 people and displaced more than a million people in eastern Ukraine.

The rebel mouthpiece Donetsk News Agency said Monday the chemical plant to the west of the city was hit by a Ukrainian artillery shell but the fire was put out and it posed no danger.

Ukrainian military spokesman Andriy Lysenko, meanwhile, said Monday that about 1,500 Russian troops had crossed the border into Ukraine via rebel-controlled border posts over the weekend. He did not provide any proof.

Russia has denied supplying the rebels with either troops or heavy weapons, but Western military experts say the sheer amount of new heavy weapons in eastern Ukraine belies the Russian denial.

The leaders of Germany, France, Russia and Ukraine aim to hold a summit Wednesday to breathe new life into a much-violated September peace plan for eastern Ukraine. Preparations for it were taking place Monday in Berlin, while rebel leaders, representatives of Russia, Ukraine and the Organization for Security and Cooperation in Europe are expected to meet on Tuesday.

Martin Schaefer, a spokesman for the German foreign ministry, told reporters in Berlin that discussions in Minsk wouldn't contain any radically new elements.

"It's not about developing new parameters but about doing the obvious, which is achieving an end to the direct fighting," he said.

In Brussels, European Union foreign ministers decided to hold off for now on expanding sanctions against Russia and the separatists and await developments from the peace talks. The need for more sanctions will be re-assessed Monday.

"Nobody has ever talked with the president with ultimatums, and they could not even if they wanted to," Peskov was quoted Monday as saying.