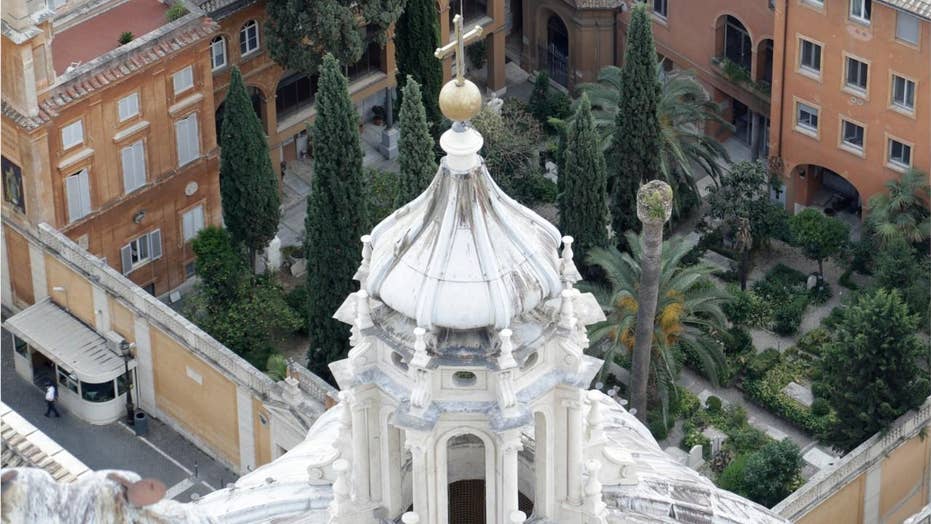 The Vatican has begun an examination of bones found in a cemetery in a bid to solve the mysterious disappearance of a girl.

A genetics expert hired by the family of a 15-year-old girl who disappeared in 1983 said Saturday that an underground space near a Vatican cemetery holds thousands of "adult and non-adult" bones that appear to be from dozens of individuals.

The bones under the Teutonic College were revealed when experts hired by the Vatican began cataloging remains that were discovered nearby last week.

VATICAN FINDS BONES, DEEPENING MYSTERY IN SEARCH FOR GIRL WHO DISAPPEARED 36 YEARS AGO

"We didn't expect such an enormous number," the expert Giorgio Portera said. "Thousands of bones have been found. That's the point we are at. Thousands of bones. I can't say if it's 1,000 or 2,000, but there are really very many, and so we assume [there is] the presence of the remains of a few dozen people."

A view of the Teutonic Cemetery inside the Vatican. An expert for the family of a Vatican teenager who went missing in 1983 says there are thousands of bones in an underground space near a Vatican cemetery. (AP Photo/Gregorio Borgia, File)

Many of the bones were broken into fragments, Vatican spokesman Alessandro Gisotti said. It's unclear when results from the analysis of the bones would be available.

Authorities are making yet another effort to solve the mystery of the 1983 disappearance of Emanuela Orlandi, the daughter of a Vatican lay employee who vanished at age 15 after she left her family's Vatican City apartment for a music lesson in Rome. Orlandi's family recently received a tip that the remains of the disappeared girl could be buried near the tombs of two 19th-century German princesses.

However, when investigators opened both tombs at the family's request, they were empty. That created a new mystery about where the dead princesses were.

Gisotti said last week that investigators had located two ossuaries – small chambers where the bones of dead people are placed – under a stone slab manhole covering inside the Teutonic college itself. He added that the bones specifically were found in two holes carved out of a large stone that was covered by an old pavement stone a few yards behind the princesses’ tombs.

The Vatican promised to continue the investigation and said that any bones in the tombs might have been displaced during structural work carried out on both the college building and a cemetery near St. Peter’s Basilica in the 1800s and in more recent decades.

Reanta Grattani, who claims to be a friend of the Orlandi family, center, holds a t-shirt with the pictures of Emanuela Orlandi and Pope Francis and a writing reading: "I'm watching you from the sky, but you (referring to Pope Francis) please let them return my mortal remains to my mother" outside the Vatican, Saturday. (AP Photo/Gregorio Borgia)

When asked about Portera's comments on the large number of bones, Gisotti told The Associated Press in an email it was "absolutely normal that in an ossuary there is an elevated number of remains, above all in an ancient cemetery like the Teutonic. No surprise."

Orlandi's case has captivated Italy and raised a further cloud of mystery over the already secretive Vatican. Some have theorized the girl was kidnapped in an unsuccessful ransom bid to win freedom for the Turkish gunman who shot and wounded Pope John Paul II in St. Peter's Square in 1981.

The teen's family has pressured the Vatican to open its archives to search for possible paper trails related to the case.

Federica Orlandi , sister of Emanuela Orlandi who went missing in 1983, is seen trough the bars of a gate as she arrives at the Vatican on Saturday. (AP Photo/Gregorio Borgia)

There haven’t been any significant developments in the case for years now. In 2012, Italian forensic police exhumed the body of a reputed mobster from the crypt of a Roman basilica in hopes of finding Orlandi’s remains as well – but the search turned up no link.

Orlandi's sister, Federica Orlandi, said learning of the underground cache of remains was "obviously an emotional experience because I think my sister's bones could be there, but I won't think about it until we have the result."

A Vatican statement Saturday made no mention of the number of remains in the newly discovered space near the Teutonic Cemetery but said the forensic work would resume on July 27.