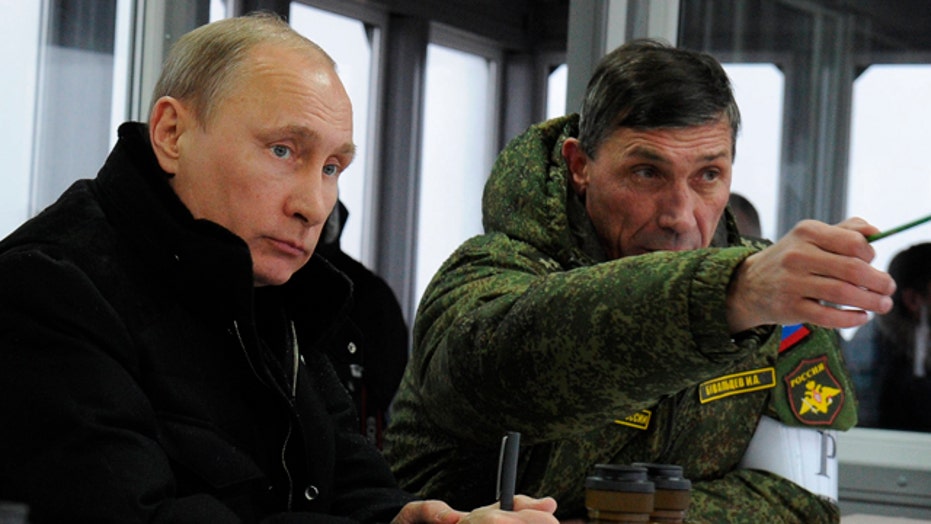 Will Russia push its forces further into Ukraine?

Dr. Sebastian Gorka on whether President Vladimir Putin is trying to create a new Russian Empire

Russia’s movement into Ukraine’s Crimean Peninsula shouldn’t come as a surprise to the West, including the U.S., according to a leading foreign policy expert.

Gorka draws comparisons to the Russo-Georgian War in 2008, when Georgia led a campaign to regain control of two breakaway provinces run by rebels loyal to Russia. But a military campaign organized by Moscow prevented them from gaining authority back.

“If you look to the situation prior to the invasion of Georgia – what we could expect … is some manufactured crisis [either] some act of violence in Eastern Ukraine,” Gorka said.

Gorka says the West shouldn’t be too surprised by Putin’s recent actions in Eastern Europe.

“Russia wasn’t going to sit there and twiddle its thumb,” Gorka said. “Ukraine is -- despite its economic problems -- a huge prize for Moscow and as a result, Putin would be stupid not to take these kinds of actions.”

Gorka believes Putin doubts the U.S. would go to war over Ukraine, but the country needs help nevertheless.

“The Russian speaking population of Ukraine are suffering, we need to go and protect them,” Gorka said.

Experts have said the West could have some leverage by imposing sanctions on Russian leadership or boycotting this year’s G-8 summit in Sochi to protest Moscow’s military movement.

But Putin also has ways he could pressure the West and especially Europe, which depends on gas lines that carry energy in from Russia.

“It’s about pipelines,” Gorka said. “Russia is executing economic warfare. It’s not going to go into a shooting war with [Europe] … but it may put on a stranglehold when it comes to economic means of warfare.