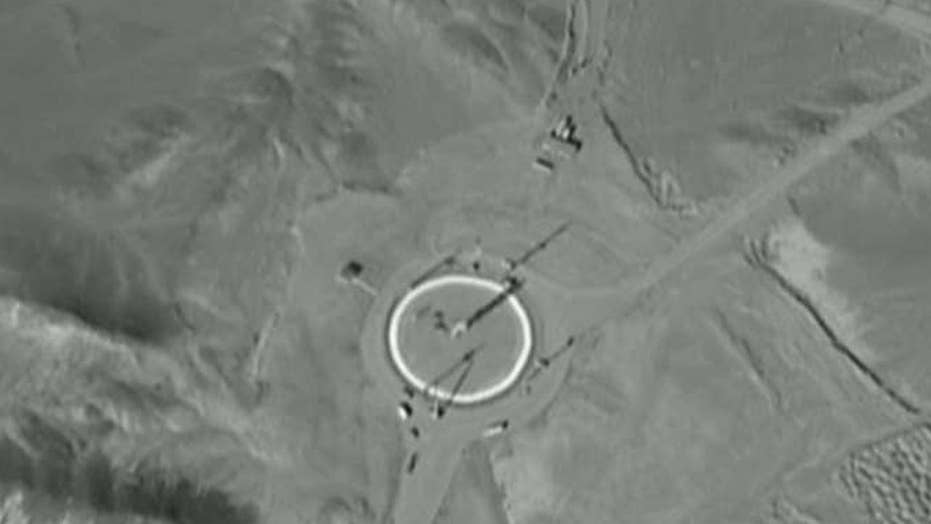 Iran removed a powerful missile from a launchpad east of Tehran within the past few days, Fox News has learned, as U.S. and Iranian officials continued trading public barbs about the Islamic Republic's missile tests.

The Pentagon is concerned because Safir missiles use the same components as those needed for an intercontinental ballistic missile. Iran’s ballistic program has “expanded dramatically” in the past 10 years, a senior U.S. defense official told Fox News.

New satellite imagery from Feb. 3, obtained exclusively by Fox News from ImageSat International and verified by U.S. officials, showed Iran preparing a Safir for launch. That missile is the type Iran has previously used to put a satellite into space.

It has been two years since Iran has launched a Safir into space, according to officials. But there has been a flurry of activity on an Iranian launchpad that U.S. officials have been watching closely, since the launch of a ballistic missile from the site last week.

In a surprising about face, Fox News learned Tuesday morning that Iran’s missile had been removed from the launchpad. It was not immediately clear why.

Days later, American intelligence officials watched as Iran quickly cleaned up the site and prepared another missile on the same launchpad near Semnan, about 140 miles east of Tehran, before it was removed.

ImageSat International reported a "missile integrations facility" near the launchpad that is normally quiet had a host of visitors on February 3, when the new missile showed up on the launchpad. Another satellite photo showed an additional Iranian missile launcher and nine vehicles in the desert not far from the launchpad.

"The specific aspect of the Safir that is useful from an ICBM perspective is learning how to stage a missile, basically stacking one missile atop another," said Jeffrey Lewis, a scholar at the Middlebury Institute of International Studies. "Other than that, though, it’s really a space launcher."

On Friday, the same day the satellite photos showed the new Safir missile on the launchpad, the White House announced new sanctions against 13 Iranian individuals and 12 Iranian companies tied to its missile program.

Iran's Supreme Leader on Tuesday issued a new warning to the White House about the coming 38th anniversary of Iran's Revolution this Friday.

"No enemy can paralyze the Iranian nation," Khamenei said. "[Trump] says 'you should be afraid of me'. No! The Iranian people will respond to his words on Feb. 10 and will show their stance against such threats," according to Reuters.

The view was shared by former President Barack Obama’s State Dept. in its last terrorism report issued in June. The report listed Iran first as a state sponsor of terrorism along with Sudan and Syria.

On Sunday, Sen. Dianne Feinstein, D-Calif., called Iran’s recent ballistic missile launch “very dangerous” and said the launch “should not have happened,” and agreed with President Trump that new sanctions on the Islamic Republic were needed.

U.N. Resolution 2231 calls upon Iran not to conduct ballistic missile tests -- but does not forbid the nation from doing so. The resolution went into effect days after the landmark nuclear deal with signed with Western nations including the U.S.

Iran has placed four satellites into orbit since 2009, according to allthingsnuclear.org, which says the Iranian Safir missile closely resembles Iran’s Shahab–3 ballistic missile, based on North Korea’s Nodong missile. The website is run by the nonprofit Union of Concerned Scientists.

In his book "The Field of Fight," Flynn writes about Iran: "For nearly forty years every American administration has permitted the Islamic Republic to build up its strength, and even organize assassinations in our capital. Jimmy Carter, Bill Clinton and Ronald Reagan either directly sold weapons to Iran, or enabled others to do it."