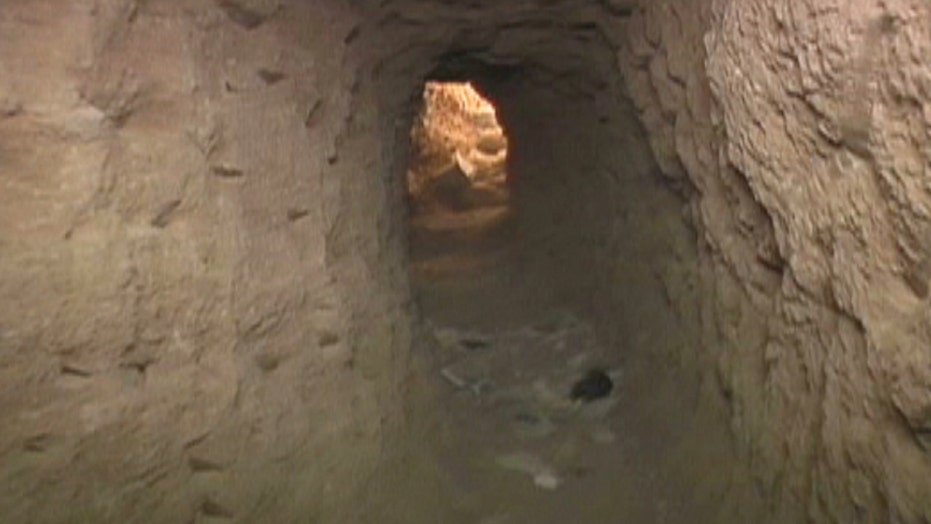 Exploring the tunnels used by ISIS

NORTHERN IRAQ – It’s been six days since the offensive to retake Mosul began, and the going has been slow as ISIS fighters and snipers, seemingly immune to airstrikes, continue to pop up in towns and villages surrounding Iraq’s second-largest city and already thought “liberated.”

As they are pushed slowly back, the reason is becoming clear: An extensive network of tunnels crisscrosses this land and allows the Islamist army’s fighters to move unseen from one location to the next.

Fox News was given exclusive access to one of these tunnels hours after it was discovered by Kurdish Pehsmerga fighters.

Inside was a warren of different tunnels and shafts, each leading to different houses in the village. Two entrances followed carved staircases up into buildings – another rose to a secret hole in a back alley, and yet another, where the whole project had begun – at the bottom of a 25-foot shaft, accessed via a hoist.

Excavated dirt from the tunnel had been piled up in every room of the house, floor to ceiling, so the entrance couldn’t be identified from the air.

These tunnels are storerooms, dormitories, bomb shelters and living quarters. They are covered with recent signs of life – tea mugs, books, mattresses and, strangely - or perhaps worryingly - a lady’s handbag.

The Kurdish Peshmerga fighters told us how local villagers had been paid $2 a day to build it – starting by using a jackhammer to dig deep into the bedrock before snaking along – sometimes for hundreds of yards.

Most of the tunnels which have been discovered follow a similar design, and it’s been reported that ISIS had a team of tunnel builders instructing the fighters over the last two years. There have also been suggestions that some had been connected to Hamas – so similar are the designs to subterranean passageways that cover the Gaza strip.

It’s hard enough to detect these tunnels in small villages in the desert. It will be almost impossible to detect them in the dense urban city of Mosul, when forces finally reach their target.

Refugees who spoke to Fox News said the ground beneath Mosul is riddled by them – almost every street and every building seems to have an entrance, and ISIS has stocked them all in anticipation of its last stand.

Peshmerga fighters expect the battle ahead to be hard fought, with suicide bombers and snipers emerging out of nowhere. This is a battle that will be won street by street, house by house and tunnel by tunnel.