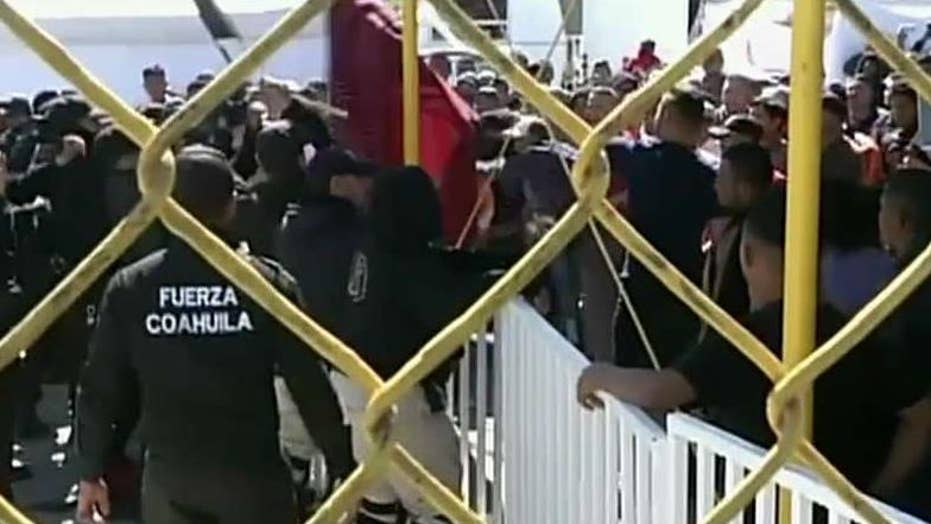 The former Honduran lawmaker who frequently has been described as one of the key organizers behind the migrant caravans that have caused a crisis in U.S. immigration policy says he's been falsely accused.

“What’s my role? Not an organizer. I guide, I advise, help them keep their spirits up,” Bartolo Fuentes told Fox News in an exclusive telephone interview on Thursday, speaking from his home in Honduras.

Fuentes, a longtime activist for immigrants, said he has lent his moral support to those planning to take part in the caravans, and accompanied them for parts of their journey. Guatemalan officials detained him on his last trip, he said, for not registering when he crossed the border.

“Groups of people had set a date to meet in San Pedro Sula in October and migrate in a caravan,” Fuentes said, speaking in Spanish. “I tell them how to stay safe, I tell them it’s a good idea to travel as a caravan, out in the open. It’s safer, otherwise you risk being the victim of a crime, you risk being mugged, even killed by thugs who take advantage of people who try to cross borders alone.”

Fuentes claimed that as far as he knew, there is no single person or organization behind the caravans, which have dominated headlines in the U.S., Mexico and Central America since last October.

“It’s safer, otherwise you risk being the victim of a crime, you risk being mugged, even killed by thugs who take advantage of people who try to cross borders alone.”

The ex-legislator debunked the charges after Fox News asked him about remarks by a Guatemalan government official speaking at the National Press Club on Tuesday who named Fuentes as being the pivotal character in the organization of the tens of thousands of Central Americans and Mexicans who have joined the caravans.

Mario Duarte, Guatemala’s head of intelligence, called Fuentes a key coordinator of the caravan, according to published reports. It was the most recent public accusation of Fuentes, a former Honduran lawmaker, of being an organizer of the caravans.

SOME IN MIGRANT CARAVAN SEEK JOBS ON MEXICAN SIDE OF BORDER

Though maintaining he wasn't the driving force behind them, Fuentes said he sees the caravans as symbolic – shows of defiance. “I tell them to go forward, migrate, with your face out in the open. There’s no reason to hide, to choose stealth, to be ashamed that you’re seeking a better life for yourself and your children, that you’re fleeing poverty and almost-certain death in Honduras.”

Fuentes admitted to organizing one modest caravan - in the late 1990s - which he claimed was made up of mothers whose children had disappeared. “I organized it,” Fuentes said. “It was just 45 people, we went to the Mexican border.”

Migrants hoping to reach the U.S. wait in line to board a bus toward Honduras' border with Guatemala, as hundreds of migrants set off by bus or on foot from a main bus station in San Pedro Sula, Honduras, late Monday, Jan. 14, 2019. Yet another caravan of Central American migrants set out Monday from Honduras, seeking to reach the U.S. border following the same route followed by thousands on at least three caravans last year. (AP Photo/Delmer Martinez) (AP)

Fuentes said he was shocked the more recent caravan, which left San Pedro Sula with a few hundred people, grew by thousands as it moved through Central America.

“You know what encouraged more and more people to join?” he asked. “It was the backlash, all the wild conspiracies about who was financing it, who was orchestrating it. Some said it was political groups in the United States that wanted to pressure President Trump. Some said Trump himself wanted the caravan to make the case for his border wall. Some said Venezuela was giving money for the caravan. The stories were wild.”

Fuentes said the stories generated "a huge amount of attention in the media in Central America, and that’s how many people learned there was such a thing as a huge group heading to the United States. And it made a lot of people think ‘Why not? Let me join them.’ So all the negative theories and backlash actually fueled the crowds that joined the caravan. It amounted to a huge promotion, a huge advertisement, for the caravan.”

Duarte, the Guatemalan official, charged Fuentes helped organize the October caravan - which was followed by several others. Duarte said a Chicago-based group, Pueblos Sin Fronteras, was a lead coordinator of the migrants.

“We detected logistical preparation throughout Guatemala and Mexico, to be able to bring all these people to the U.S. southern border,” Duarte said, according to Breitbart News. “They started working with Honduran, Guatemalan, and Mexico counterparts,” he said. “The organization was impressive to say the least. They used mainly [social media apps] WhatsApp and Facebook.”

Like Fuentes, Pueblos Sin Fronteras has denied organizing the caravans. They have said their role is only to lend humanitarian assistance to the migrants, as well as to “accompany them.”

But migrants have told U.S. and Latin American news outlets a different story. They have said some of these groups strongly encouraged them to make the trip, telling them they would be welcomed with open arms.

Citing former allies of the group, the Los Angeles Times reported Pueblos Sin Frontreras played a very active role in organizing the caravans, even appearing to encourage migrants to get into confrontations with border officials at various points in their trip toward the U.S.

Others once affiliated with Pueblos Sin Frontreras, which has locations in Honduras as well as elsewhere in Latin America and the United States, accuse the group of putting migrants in peril to advance its own interests. In one incident that made headlines last year, some members of the group led a march in Tijuana that ended in a violent clash, when some migrants tried to go over a U.S.-Mexico border fence into San Diego.

Pueblos Sin Fronteras responded to the criticism online, calling it mean-spirited and unfounded. “For the past few days, Pueblo Sin Fronteras has been the object of multiple critiques and declarations that discredit the work we have done for years, and especially our accompaniment of this exodus,” it said.

“These declarations are irresponsible and by criminalizing and defaming us they increase the risks faced by all human rights defenders – both those who speak out and declare their solidarity from within their own contexts, as well as those who put their bodies on the line. These declarations also put members of the Central American exodus in grave danger.”

Shortly after the caravan set out from Honduras last October, Honduran official Maria Aguero accused Fuentes of being a ringleader. Aguero, who made the charge at a press conference, said Fuentes had persuaded Hondurans to make the difficult journey by misleading them about their chances of getting into the United States, and claimed that his motive was to create political chaos for the country's government.

Fuentes denied ever having worked with Pueblos Sin Fronteras. He said that the organization, whose website highlights the caravans and rails against the government of Honduras, did not plan a migration in October from Honduras.

“They have led the caravan from Tapachula (Mexico) to Tijuana,” Fuentes said. “Pueblo Sin Frontreras did not want the October caravan to depart from Honduras.”

Fuentes, long an outspoken and sworn enemy of Honduran President Juan Orlando Hernandez, said his country's leaders were using him as a scapegoat to deflect from the unlivable conditions - ranging from poverty to drug trafficking, gang violence and high murder rate - they had fueled.

"They don't want to own up to the fact that people are fleeing a mess that they created," he said. Fuentes said he will encourage his compatriots to leave Honduras in caravans.

"I tell them to go, get to Mexico, go right to the authorities and go through the process of getting a visa or asylum," Fuentes said. "I say 'Do not sneak across any border. Be open about what you're fleeing. Let them do a background check. If you have nothing bad in your past, and you're looking to do an honest day's work for honest pay, you no reason to sneak around and feel like a criminal.'"