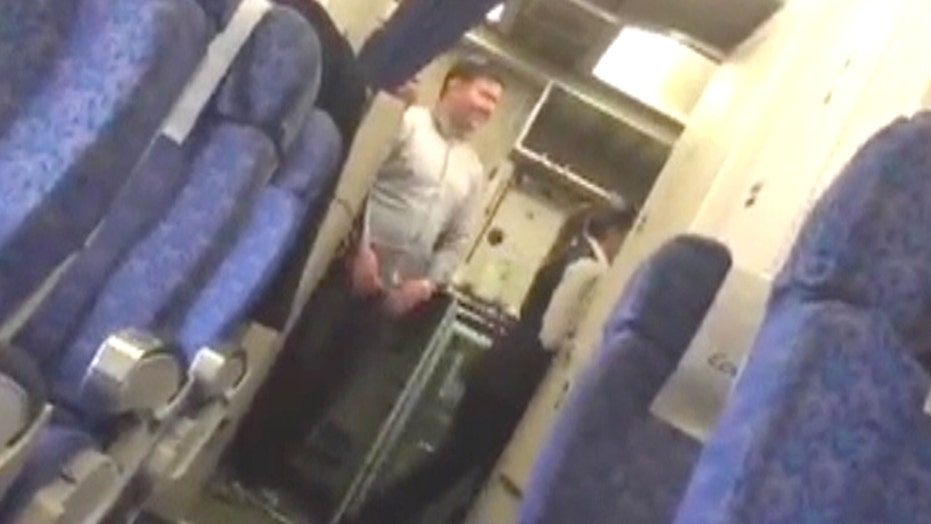 The ex-wife of an Egyptian man who authorities say hijacked an EgyptAir flight and threatened to blow it up with a fake suicide belt described her former husband Thursday as an "extremely dangerous man" who used drugs, terrorized his family and beat her and their children.

Marina Paraschou strongly rejected some media reports that suggested 59-year-old Seif Eddin Mustafa hijacked the Airbus A320 with 72 passengers and crew onboard as a desperate man who acted out of love and had wanted to see her and his children.

Her comments came as the first video emerged showing Mustafa – during the hijacking – posing for a picture with a passenger.

Ben Innes, a 26-year-old from the northern English city of Leeds, said Wednesday he was "trying to stay cheerful in the face of adversity" when he approached Mustafa and took the photo, which later went viral.

In an interview published Thursday in leading Cypriot daily Phileleftheros, Paraschou said it's a "lie" that Mustafa asked to speak to her and that police who brought her to Cyprus' main Larnaca airport where the plane was diverted only asked her to identify his voice.

Paraschou said Mustafa was a "fanatical" Palestine Liberation Organization supporter who bragged about participating in the killing of three Israeli soldiers and was jailed for four years in Syria.

Cypriot officials, who described Mustafa as "psychologically unstable," said he had asked police negotiators during Tuesday's hijacking to deliver a letter to Paraschou in which he demanded the release of 63 dissident women imprisoned in Egypt. The six-hour ordeal ended peacefully when police arrested Mustafa after all passengers and crew were released.

During a court hearing Wednesday, a police prosecutor said Mustafa told authorities after his arrest, "What's someone supposed to do when he hasn't seen his wife and children in 24 years and the Egyptian government won't let him?"

But Paraschou suggested in the interview that it was all a ruse.

"This man never cared for his children for one minute, either when he lived here or when he went away," Paraschou is quoted as saying. "He only offered pain, misery and terror. And even now when he's in police custody, my children and I are afraid."

Cypriot police said Mustafa had not asked any lawyer to represent him.

In a separate interview with daily Politis also published Thursday, Paraschou said Mustafa used her as an "excuse" to seek asylum in Cyprus.

Paraschou told Phileleftheros she married Mustafa in 1985 when she was 20. The couple divorced five years later and since then had only once made contact when she called him several years later to say that their teenage daughter — one of four children the couple had together — had been killed in a car accident.

"What do I care? It doesn't matter she was killed," Paraschou said Mustafa had told her.

She said while married, the couple lived in her parents' home and that Mustafa never held down a job, beating his children when he couldn't support his drug habit.

Egypt's interior ministry said Mustafa had a long criminal record but had finished serving a one-year prison term in March 2015.

Cyprus police told the AP that Mustafa's criminal record on the island stretched back to 1988, when he was convicted on six counts of forging passports and handed a suspended sentence. He was later deported to Egypt following domestic violence charges by Paraschou.

He re-entered Cyprus on an assumed Qatari identity, but was tracked down and again deported to Egypt in 1990.