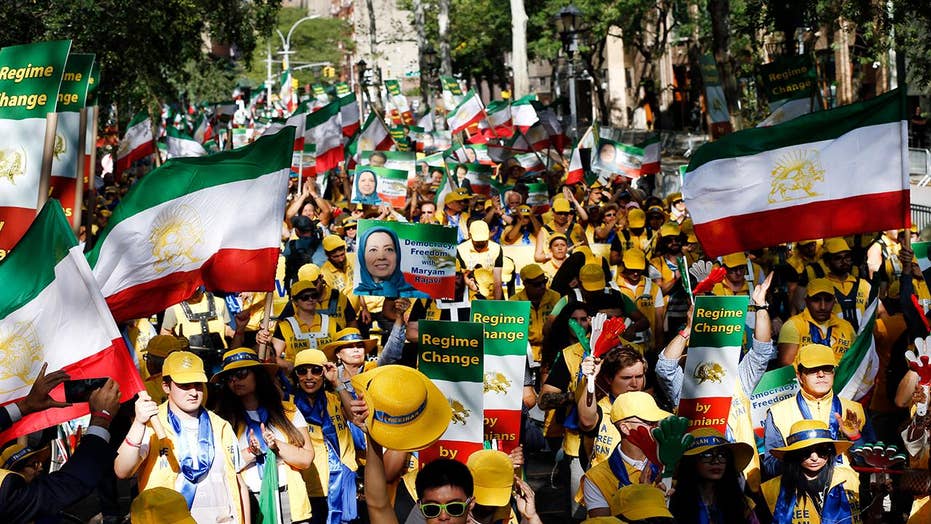 Iranian protesters assemble outside the United Nations General Assembly to praise President Trump and call on the U.N. to enact regime change in Iran as Britain, France, and Germany have joined the United States in blaming Iran for attacks on key in facilities in Saudi Arabia.

Members of the European Parliament have called on trade conditions with Iran to hinge on Tehran improving its appalling human rights record.

“Iran is a country where women are imprisoned for being women,” and business deals with the regime should be “conditioned on respect for human rights,” Italian MEP Alessandra Moretti said on Wednesday in Strasbourg, France.

Milan Zver, a Slovenian MEP, went further, urging the European Union to press its member governments to “stop trade” with the Islamic Republic. “The regime needs us for survival,” he said.

While the United States has imposed crippling economic sanctions on Tehran's financial and energy sectors, Europe's sanctions have largely been symbolic.

Iranian agents murdered two Iranian dissidents in the Netherlands – one in Almere, near Amsterdam, in 2015, and one near the Dutch foreign ministry in The Hague in 2017. In January 2019, the Netherlands accused Iran of the killings and the EU froze the assets of an Iranian intelligence unit and of two of its staff members.

In 2018, Iranian agents, according to the French government, sought to bomb a gathering in Paris of the People’s Mojahedin Organization of Iran (PMOI) – a controversial Iranian political opposition group.

The French government continues to promote trade with the Islamic Republic, seeking to circumvent U.S. sanctions.

The European lawmakers’ demands to sanction Iran’s regime came after a presentation by Maryam Rajavi, the leader of the PMOI, who introduced a new book published by her organization, “Crimes Against Humanity.”

The book details Iran’s shocking massacre over five months in 1988 of thousands of political prisoners, the majority of whom were from the PMOI. Marxist prisoners were also executed. The exact number of prisoners killed remains in dispute, but estimates range up to 30,000. The book provides granular accounts of the slaughter ordered by senior Iranian clerical leaders, including the names of 5,015 members or supporters of the PMOI who were murdered by the regime in 1988.

The U.S. government classified the PMOI as a terrorist organization in 1997 but removed the designation in 2012.

The United States government designated the IRGC a foreign terrorist organization in April 2019.

IRAN BANNED FROM WORLD JUDO UNTIL AGREES TO FACE ISRAEL

At Wednesday’s meeting in Strasbourg, lawmaker after lawmaker denounced the Iranian regime in harsh terms, in sharp contrast to the EU’s efforts to maintain strong relations with Tehran. Ryszard Henryk Czarnecki, a Polish MEP, said the “terrorist regime” in Iran shows “no mercy for its citizens.”

Khodayari was charged with “appearing in public without a hijab” after trying to enter Tehran’s Azadi Stadium dressed as a man so she could watch a soccer match last March. In protest against her possible sentence, she set herself ablaze in front of the Islamic Revolutionary Court of Tehran in September, and died of her injuries a week later.

The Spanish lawmaker said this is “absolutely shocking” and it is a “duty of member of the European Parliament to make the case for women’s rights” in Iran.

Sahar Khodayari, an Iranian female soccer fan known as "Blue Girl" for the colors supporting of the Esteghlal team, died after setting herself on fire after learning she may serve a six-month prison sentence for trying to enter a soccer stadium where women are banned. (AP Photo/)

Jan Zahradil, an MEP from the Czech Republic, took outgoing EU foreign policy chief Federica Mogherini to task for her efforts to mollify the Islamic Republic.

“The EU fails to recognize the real threat coming from the Iranian regime,” he said, adding that Mogherini has been “promoting an appeasement policy toward the mullahs.”

Zahradil said Iran’s regime is taking control of the neighboring countries of Iraq, Syria and part of Lebanon, implementing a warlike and expansionist foreign policy.

The criticism leveled at EU policy toward Iran’s regime comes on the heels of a German Green Party vice president of the Bundestag, Claudia Roth, enthusiastically greeting Iranian Parliament Speaker Ali Larijani, a Holocaust denier and former chief nuclear negotiator, at the assembly of the Inter-Parliamentary Union in Belgrade last week.

Dr. Kazem Moussavi, an Iranian dissident living in Germany, slammed Roth on Twitter: “Roth presents herself as a feminist but courts representatives of the Islamic regime that represses women in Iran and wants to destroy Israel.”

On Tuesday, the German newspaper Bild said Roth, German President Frank-Walter Steinmeier and undersecretary of foreign affairs Niels Annen are contributing to rising hatred of Jews in their country.

Steinmeier sent a congratulatory letter to Iran’s regime in February to honor its 1979 Islamic Revolution, while Annen participated in Revolution Day celebrations at Tehran’s embassy in Berlin.

Italian MEP Gianna Gancia echoed the demands of her colleagues, noting that “Representatives of Europe seem only to be interested in business and trade with Iran. The EU Commission should stop relations with Iran and impose sanctions on the regime for violations of human rights. We want democratic change in Iran.”

“The Iranian people do not want this regime,” said British MEP Anthea McIntyre.

Former Colombian Senator Ingrid Betancourt, a former political hostage and presidential candidate who has fought political corruption, said at the EU event that Iran has taken dual nationals from France and the United Kingdom as hostages.

“This is the moment to say we want them free,” she said, adding that “No equality for women means there is no freedom for anyone in Iran.”

Iran’s regime jailed the British-Iranian national Nazanin Zaghari-Ratcliffe in 2016 on what are widely believed to be trumped-up espionage charges.  In October, it was revealed that Iran imprisoned French-Iranian dual national Fariba Adelkhah, an anthropologist at the Institut d’études politiques de Paris (Sciences Po). The French academic Roland Marchal, a senior researcher on economies and conflicts in sub-Saharan Africa from Science Po, is also being detained in the Islamic Republic.

Rama Yade, the former French Secretary for Human Rights, said Iran has become an “open air prison” and the “Iran nuclear agreement does not work.” Tehran has continued to violate the terms of the Joint Comprehensive Plan of Action, the formal name for the atomic accord that aims to stop Iran’s drive to obtain nuclear weapons.