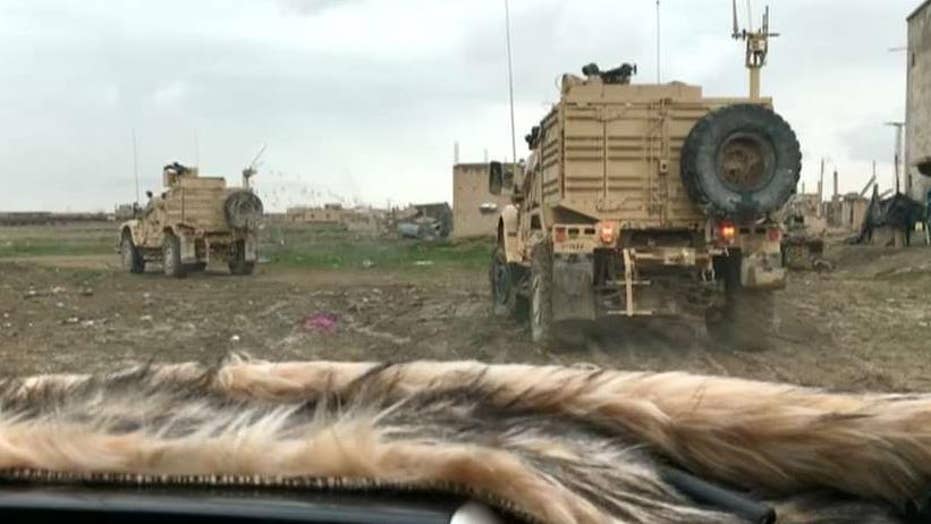 Embedded with the Syrian Kurds in what is considered the last ISIS-held village in Amuda, Benjaman Hall reports on the devastation on the frontlines.

Turkish President Recep Tayyip Erdogan has insisted he will go ahead and form a “safe zone, ” an area designed to protect civilians and curtail refugee outflows in conflict regions, along the Syrian border within months - with or without the support of the U.S and other allies.

“We expect the promise of a security zone – a buffer zone aimed at protecting our country from terrorists – to be fulfilled in a few months,” Erdogan said at a rally last week. “Otherwise, we will definitely form this safe or buffer zone ourselves. Our only expectation from our allies is that they provide logistical support to Turkey’s effort.”

Erdogan’s comments came just a day after Turkey’s foreign minister also mandated that Turkey has the ability to create a safe zone in Syria on its own. Erdogan has declared that not only will such sectors protect Turkey from “terrorists,” but that it would allow more Syrian refugees to return their country, even under the continued leadership of Bashar al-Assad.

As it stands, Turkey hosts around four million Syrian who have fled the neighboring nation amid the long-running civil war.

But not everyone is so confident.

“Syrian refugees in Turkey, Lebanon and Jordan are looking first for security and to be safe from the regime. As long as the future of the region is not clear, there is no way for Syrians to go back,” said Bassam Barandi, a former Syrian diplomat, political advisor to the High Negotiations Committee of the Syrian Opposition and co-founder of the DC-based activist organization People Demand Change. “If the regime enters, then we should expect a new wave of Arab refugees towards Turkey, and if Turkey enters, we should expect a new wave of Kurdish refugees to Iraq.”

But its most important mission with a safe zone is centered on Turkey’s aim to drive out the U.S.-backed Kurdish People’s Protection Units (YPG), escalating a long-simmering point of contention between Ankara and Washington. While the YPG is viewed as a critical and effective ground force in the U.S. battle against ISIS, Turkey perceives them as a wing of the Kurdistan Workers' Party (PKK), which has long been deemed a terrorist group given their decades-long violent struggle for separatism.

Turkey has threatened to launch a new offensive against the Kurdish fighters in northern Syria for months, and last week shelled YPG positions in the region of Tal Rifaat, of which they control a portion. But Erdogan held off plans for a full-scale offensive after President Trump made the unexpected decision last month to commit to withdrawing all 2,000 troops from Syria, effectively handing over reign and responsibility in the region to Turkey.

But over the ensuing weeks, cracks have emerged between the two NATO allies over the agreement as US officials have warned Turkey not to attack the Kurds while Turkey has maintained its position to clear the area east of the Euphrates River.

Trump has tweeted several times over the prospect of establishing a “20-mile safe zone” in Syria, which is a key component of the Syria withdrawal plan, but little detail has been publicly provided as to what exactly it would look like and who would herald control.

A similar U.S. endeavor to work with Turkey fell apart in 2016 after Turkey and its Syrian allies went beyond the bounds of pre-agreed terms with the U.S., which was focused on fighting ISIS, and went on to attack Kurdish posts. The actions prompted US officials to promptly stop support for the coordinated mission.

And despite Trump and Erdogan’s earlier espousals to work together on a revived safe zone – some remain skeptical of Turkey’s role as the main guarantor.

Brett McGurk – the U.S. Special Envoy to defeat ISIS who resigned after Trump’s decision to leave Syria – was one who condemned Turkey as “not a reliable partner.”

“The Syrian opposition forces it backs are marbled with extremists and number too few to constitute an effective challenge to Assad or a plausible alternative to the SDF,” McGurk wrote.

In contrast, the Turkish media has expressed concern that Syria will follow Iraq’s lead and provide an autonomous region to the Kurdish people, thus burgeoning their own national security threat.