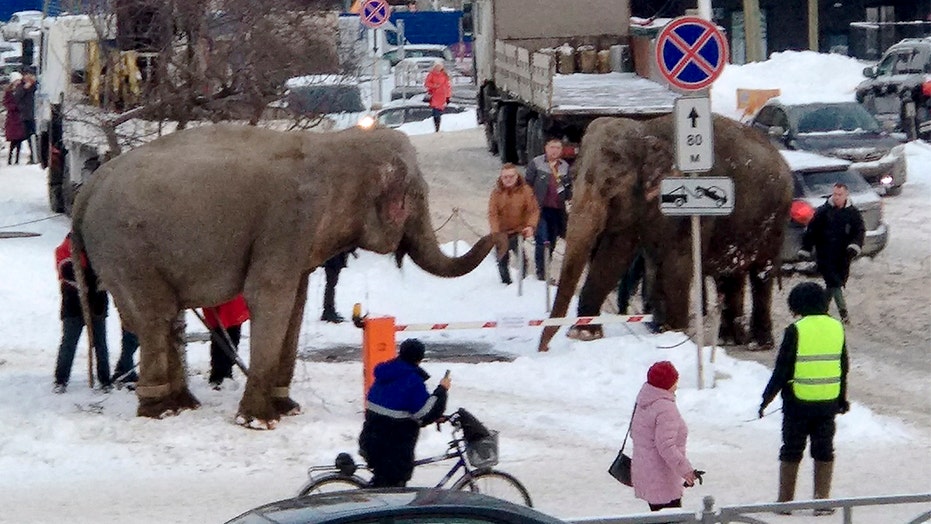 This isn’t a sight you see often.

A pair of elephants were caught on video taking a wintry stroll along the streets of Russia's third-largest city after escaping from a circus Thursday.

The local circus in Yekaterinburg said the two elephants — Karla and Ranni — belonged to an Italian company that ran a show there during the New Year holidays, according to the Associated Press.

When the circus troupe in Yekaterinburg tried to load the animals into a truck to head to the next destination, they resisted and walked away. (AP/Anna Dubrovskaya)

When its troupe tried to load the animals into a truck to head to the next destination, they resisted and walked away. The circus said Ranni loitered near the loading point but the more adventurous Karla decided to take a tour of the city.

Videos taken of Karla’s exploits show one man trying to stop her by holding on to her trunk – but he ended up being pushed across the street with his feet sliding on the ice.

It reportedly took a dozen people to corral the wandering elephant. (AP)

Handlers finally got a rope around one of the elephant's front legs, but it took a dozen people to pull her back. She reluctantly obeyed after playing in the snow.

An elephant crosses the street in Yekaterinburg, Russia. (AP/Daniil Romanov)

“The elephants wanted to get some new experiences before a long journey, and they got them,” the circus commented.