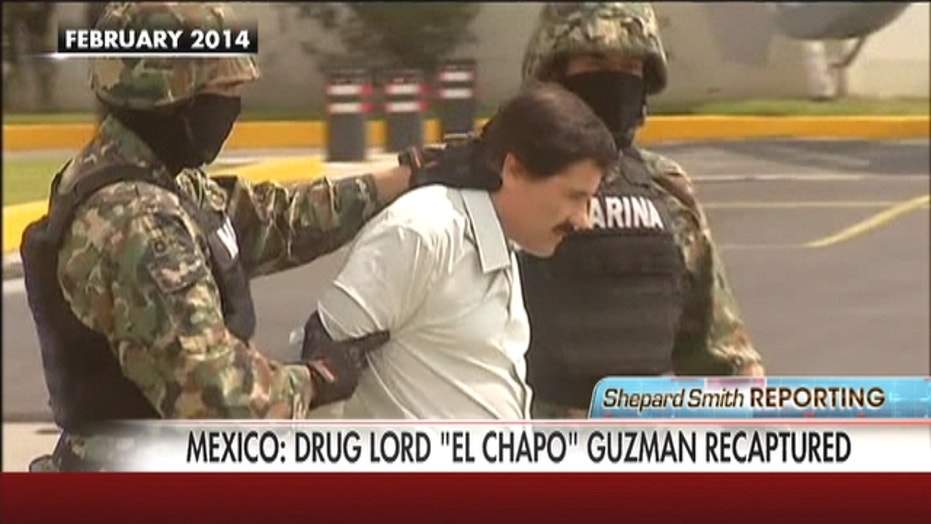 After escaping a maximum security prison in July,

The recapture of Mexican drug lord Joaquín "El Chapo" Guzmán has everyone wondering whether the Sinaloa cartel boss will be extradited to the United States to face a slew of drug trafficking, money laundering and criminal conspiracy charges.

Most analysts of Mexico's drug war seem to agree that Guzmán's extradition will be a rushed affair, but warn that the drug cartel leader might still have some legal tricks up his sleeve that would delay – and possibly prevent – him from being sent north of Rio Grande.

"Approving Guzmán's extradition should be relatively quick," David Shirk, a political science professor at the University of San Diego and director of the Justice in Mexico project, told Fox News Latino. "The only concern is if he files an injunction that could delay the move."

The U.S. filed an extradition request for Guzmán on June 25, 2015 – about 2½ weeks before his most recent escape. Following some early reticence, the Mexican government appears more than willing to send the Sinaloa Cartel boss to the U.S.

But not everyone is so certain. Former Mexican Attorney General Jesus Murillo Karam had bragged that Mexico wouldn't extradite Guzman until he had served his sentences in Mexico.

A court order filed by Guzman's lawyer, Juan Pablo Badillo, in the weeks following the drug lord's escape from the maximum security Altiplano prison argued that if Guzmán was extradited to the United States, he would likely be tortured to force a confession to crimes for which U.S. authorities have accused him.

Over a dozen cartel leaders – including high-ranking ones – have been extradited to the U.S. from Mexico since Guzman’s escape last year. Experts say the extraditions were a move by Mexico to try and make up for the embarrassment of El Chapo’s escape.

"It's all a matter of politics," Eric Olson, the associate director of the Latin American program at the Woodrow Wilson Center told FNL. "There is, however, an understanding that the U.S. will see Guzmán extradited."

Despite the legal avenues that Guzmán might have in Mexico, observers still contend that the chances of extradition to the U.S. are extremely high – given his previous escapes from custody in Mexico and the promises made by officials in Mexico City to their counterparts in Washington.

"There are two major differences in comparison to 2014, as far as the possibility of extradition is concerned," Alejandro Hope, a national security expert in Mexico City, tells FNL. "There is a formal request for extradition now. U.S. pressure on Mexico is also much higher now. And the Mexican government no longer has the benefit of the doubt."

"This arrest does, in some way, erase some of the humiliation that fell upon the Mexican government after Chapo's escape last year," Hope adds. "But it will also mean that the file of his escape will be reopened."

At least seven U.S. federal courts have pending complaints against Guzmán accusing him of masterminding operations that smuggled drugs into the country.

Guzmán was arrested by Mexican forces in February 2014 in the Pacific Coast tourist resort of Mazatlán, ending years on the run after a daring prison break in 2001.

Guzmán escaped in July through a mile-long tunnel dug to what authorities say was a building set up for the prison break in plain sight of the Altiplano prison. The tunnel leading from the drug lord’s cell to the building was equipped with a ventilation system and a customized motorcycle.

The U.S. had put a $5 million reward for information leading to Guzmán's arrest, and there was a price of $3.8 million on his head in Mexico.

Friday morning, the cartel boss was recaptured during a raid by Mexican Marines, which took place in the city of Los Mochis. During the raid, five suspects were killed and six – including Guzmán –were arrested. Marines seized two armored vehicles, eight rifles, one handgun and a rocket-propelled grenade launcher.

"Mission accomplished: we have him," Peña Nieto tweeted Friday." I want to inform Mexicans Joaquín Guzmán Loera has been arrested."