The Philippines recalled its top diplomatic leaders in Canada on Thursday after officials say the North American country missed the deadline to take back truckloads of trash that was illegally shipped to the Philippines years ago.

Foreign Secretary Teodoro Locsin Jr. tweeted that the Philippines "shall maintain a diminished diplomatic presence in Canada until its garbage is ship bound there." The drastic move is the latest strain in Philippine relations with Canada under President Rodrigo Duterte.

Duterte threatened last month to forcibly ship the containers of garbage back to Canada and dump some at its embassy in Manila if Canadian officials don't take back the waste. Officials later set a May 15 deadline for Canada to comply.

Locsin said in his tweet that letters for the recall of the Philippine ambassador and consuls in Canada have been sent and that they were expected back in Manila after about a day.

"That recall shows that we are very serious in asking them to get back their garbage otherwise we're gonna severe relations with them," presidential spokesman Salvador Panelo told a regular news conference.

At least 103 containers of household trash, including plastic bottles and bags, newspapers and diapers, were shipped in batches from Canada to the Philippines from 2013 to 2014. Most of the shipping containers remain in two ports in Manila and northern Subic freeport, sparking protests from environmental activists. Philippine officials say they were falsely declared by a private firm as recyclable plastic scraps and have asked Canada to take back the garbage.

Duterte raised the garbage issue in a speech last month while officials from both countries were already discussing a resolution to the issue. The volatile president said he was ready to "declare war" against Canada over the issue.

CANADA-PHILIPPINES TRASH WAR: WHO WOULD WIN IF DUTERTE ACTUALLY FOLLOWED THROUGH WITH HIS THREAT?

"I want a boat prepared. I'll give a warning to Canada maybe next week that they better pull that thing out or I will set sail to Canada and pour their garbage there," Duterte said, adding he would ask Canadian officials to "prepare a grand reception."

"Celebrate because your garbage is coming home," he said. "Eat it if you want to."

Canada said it has repeatedly expressed its commitment to promptly shipping and disposing of the Canadian waste. 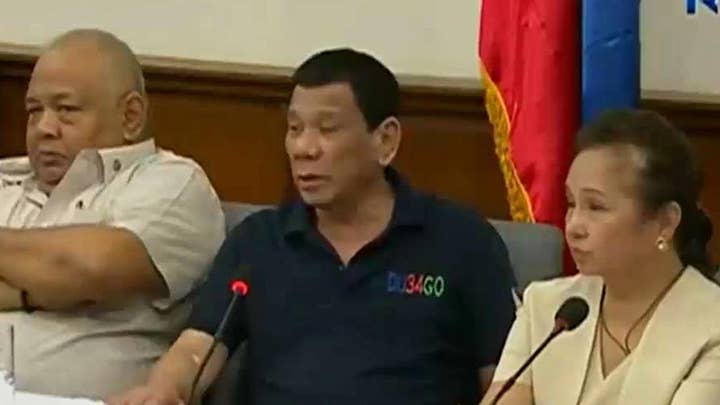 "Canada is disappointed by this decision to recall the Philippines ambassador and consuls general," said Brittany Fletcher, a spokeswoman for Canada's foreign affairs department. "However, we will continue to closely engage with the Philippines to ensure a swift resolution of this important issue."

Prime Minister Justin Trudeau said Canada has been working with officials in the Philippines on the issue "over the past months, very hard over the past weeks."

"We very much hope to get a resolution on this shortly," he said.

A Manila court ordered the private importers in 2016 to ship the waste back to Canada. Of 103 shipping containers that entered the Philippines, the waste from 34 has been disposed of locally.

Canadian Prime Minister Justin Trudeau said in 2017 that regulations preventing the return of the garbage had been resolved.

Last year, Duterte ordered the cancellation of a multimillion-dollar agreement to buy 16 helicopters from Canada after its government decided to review the deal due to concerns the Philippine military might use the aircraft in counterinsurgency assaults.