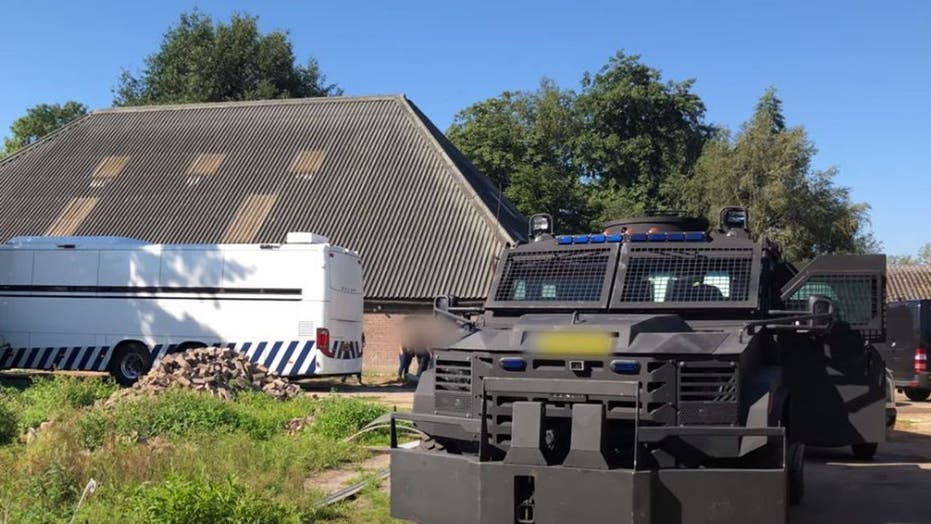 Dutch police have uncovered what they described as the biggest cocaine laboratory ever discovered in the Netherlands, leading to the arrest of 17 suspects from Colombia, Turkey and the Netherlands.

The drug lab was hidden at a former horse riding school in Nijeveen, some 75 miles from Amsterdam, police said in a statement Tuesday.

Police raided the riding school on Friday, discovering tens of thousands of liters of chemicals and 220 pounds of crack cocaine. Sleeping quarters and recreation areas were also found at the site.

The facility was equipped to produce up to 440 pounds of cocaine a day, officials said. (Politie Landelijke Eenheid)

"This is the largest cocaine laboratory ever found in the Netherlands," police chief Andre van Rijn said in the statement.

Police video showed equipment and supplies including plastic barrels and vats of chemicals and a row of five red cement mixers that were used to extract cocaine from products like clothing that are laced with the drug before being exported to the Netherlands.

Police said 13 of the suspects in custody are Colombians, three are Dutch and one is Turkish. They are due to appear before an investigating magistrate on Wednesday and Thursday.

The drug lab was hidden at a former horse riding school in Nijeveen. (Politie Landelijke Eenheid)

The owner of the property, who lived next door with his 92-year-old mother, was among those arrested, the Dagblad van het Noorden newspaper reported. A local resident said the mother was not arrested.

“She is devastated, but is now in good hands,” he told the paper. “I don't want to say more about it. It's bad enough for her.”