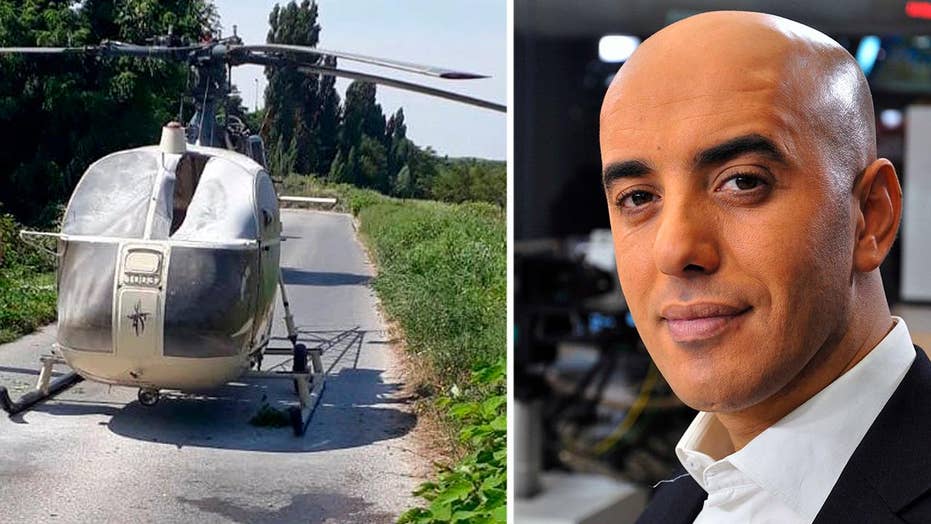 The armed gang who helped bust a notorious murderer out of a French prison may have used drones to stake out the facility months before the daring break, a top official said Monday.

Justice Minister Nicole Belloubet said authorities are urgently looking for gaps in the security system that would have allowed Redoine Faid, 46, to escape by helicopter from the Reau prison south of Paris, where he was serving a sentence of 25 years. Belloubet said authorities are particularly focused on reports of several drones that flew over the prison some months ago.

In an interview with Europe 1 radio, Belloubet said she sent a team to the prison to see "whether the security measures were defective so that we can rectify them," according to Agence France-Presse.

In this photo dated Nov. 22, 2010, notorious French criminal Redoine Faid poses prior to an interview with French all-news TV channel, LCI, as he was promoting his book, in Boulogne-Billancourt, outside Paris, France. (IBO/Sipa via AP)

Belloubet said that leaving Faid in the same prison after his previous escape five years ago was a mistake.

"We must be careful not to leave the same people in the same places for too long, when we're dealing with this type of individual," she said, according to AFP.

Faid previously said his life of crime was inspired by films such as "Scarface," and he's participated in a series of bank and armored truck robberies.

The 46-year-old was serving 25 years for an attempted armed robbery in 2010 that led to a high-speed chase and a shootout with police. The gunfire resulted in the death of 26-year-old officer Aurelie Fouquet. Faid had already escaped once before, in 2013, by blasting his way out with explosives hidden in tissue packs.

This two photos combo provided on Monday, July 2, 2010 by the AP on the condition that its source not be revealed shows portraits of notorious French criminal Redoine Faid who is wanted in connection with his escape from the Reau prison in France. (AP)

"Redoine Faid is someone who has freedom in his DNA. He also has lawbreaking in his DNA," Laurent-Franck Lienard, the lawyer for Fouquet's family, told RTL radio on Monday. "If there was one inmate to keep a close eye on, it was him."

Faid's brother, who was visiting him in prison at the time of the escape, was in custody Monday.

French media reported the escape began when three men took a helicopter pilot hostage at a flying club in the Paris region. The pilot was later released with no physical injuries.

This photo taken on Sunday, July 1, 2018 and provided on Monday, July 2, 2018 by the AP on the condition that its source not be revealed shows an helicopter abandoned by notorious French criminal Redoine Faid after his escape from a prison, in Gonesse, north of Paris, France. (AP Photo)

The helicopter was found burned Sunday, in the town of Garges-les-Gonesse, located in the northern suburbs of Paris about 37 miles from the prison. Faid is believed to have fled in a car with the armed accomplices, and French Prime Minister Edouard Philippe said nearly 3,000 officers are searching for him.

"Police forces are fully mobilized in order to find this person," Philippe told RTL. "We know he is dangerous. We know he is a determined person and I want to find him as soon as possible."