French populist Marine Le Pen’s longshot political campaign just got a major boost after her main rival became mired in scandal just months before France goes to the polls -- possibly giving the outsider her best shot yet at the Élysée Palace.

Le Pen, who leads the right-wing Front National, has run on a Trump-like platform of anti-Islamism, anti-globalization, stricter immigration controls, and a promise to leave the European Union. Formally launching her presidential bid Sunday, she warned about the “two totalitarianisms” facing France -- Islamism and globalization.

“Those two ideologies want to bring France to its knees,” she told supporters in Lyon.

Le Pen’s main opponent, conservative François Fillon -- who is running a traditionalist social and economic conservative platform with a strong Catholic flavor, was until recently seen as the favorite.

Although running neck-and-neck in first-round polls it was widely believed that in the second round on May 7 -- when the race becomes a head-to-head between the two top candidates -- left-wingers and independents would pick Fillon over Le Pen.

But that narrative has been turned upside-down after the French newspaper Le Canard Enchaîné revealed earlier this month that Fillon’s wife Penelope and their two children were paid almost a million euros of taxpayer money, with little evidence they did any work in return.

Police have opened a probe, Fillon’s poll numbers have dropped, and a recent Franceinfo radio poll shows two thirds of the public want Fillon to pull out of the race.

The “Penelopegate” claims are more devastating in particular for Fillon as he has run a campaign emphasizing his Catholic background and “family values.”

"These accusations are hitting at the load-bearing wall of his popularity," Yves-Marie Cann, head of political studies at Elabe, told Reuters.

Fillon has scrambled to move past the accusations. In a press conference Monday he apologized for hiring his wife, denied wrongdoing and said he wasn’t stepping down from the race.

“It was an error; I profoundly regret it and I apologise to the French people,” he said.

Whether he steps out of the race, his fall from grace has left Le Pen in a fundamentally different fight. One of Fillon’s strengths was that he was able to appeal both to traditional conservatives with his fiscal and social policies, while also eating into Le Pen’s hardline stance on immigration -- he even wrote a book called “Conquering Islamic Totalitarianism.”

As Fillon sinks, Le Pen’s opponent is now likely to be independent center-left candidate Emmanuel Macron -- previously running in a distant third place. While Macron is running well behind Le Pen in first round polls, polls for a hypothetical second round between Macron and Le Pen suggest the centrist would be victorious.

France is a region that has been rocked by a number of high profile Islamic terrorist attacks, of which some of the perpetrators have been migrants. On Friday, a man wielding a machete and yelling “Allahu Akbar” was shot by a soldier at the Louvre. Additionally, the recent deconstruction of the so-called “Jungle Camp” in Calais has left migrants from the Middle East and North Africa setting up makeshift camps on the streets of Paris.

Le Pen has repeatedly praised President Trump, and may use a form of his “drain the swamp” campaign promise to weaponize the Fillon scandal as an example of a broader problem in French politics. There were signs of that Sunday when she took a swipe at “the cash-rich right and the cash-rich left." 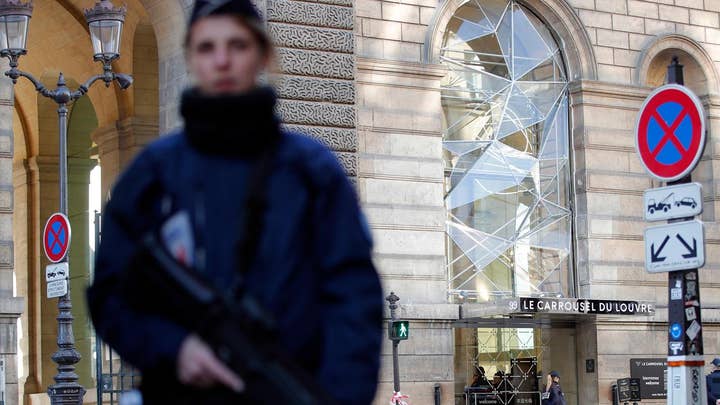 A Le Pen victory would not be a small issue globally. Should the feisty Frenchwoman enter the Elysee Palace, the European Union would be hit with a potentially fatal blow -- as she has promised a “Frexit” referendum to leave the E.U. France and Germany make up the core of the bloc and it is difficult to see how it could possibly survive in its current form if France chose to leave.