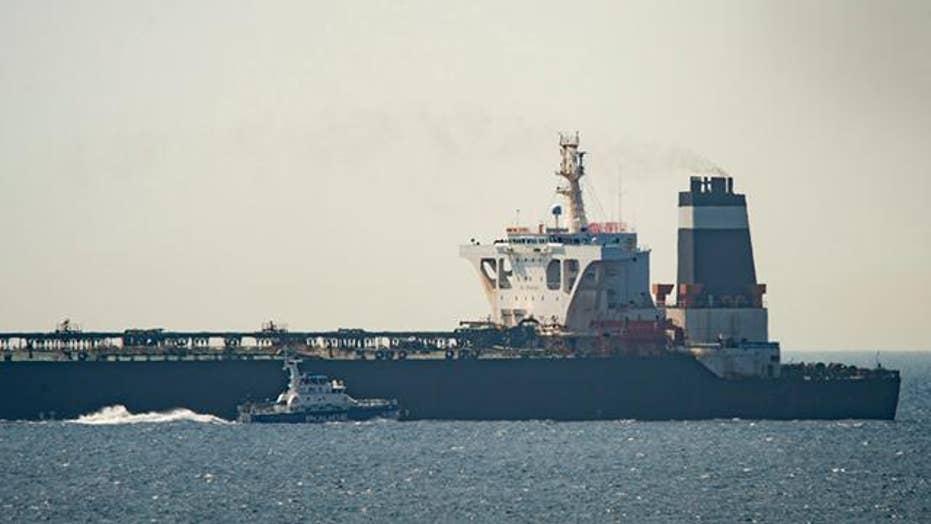 Britain warns Iran after Iranian military gunboats tried and failed to seize British oil tanker. Foreign Secretary Jeremy Hunt says the Iranian tanker could be released if the oil is not heading to Syria

An Iranian oil tanker held by British forces near Gibraltar will be released if the United Kingdom is assured the oil will not be heading to Syria, London's top diplomat said Saturday.

Foreign Secretary Jeremy Hunt said on Twitter that he had a "constructive call" with his Iranian counterpart Javad Zarif, during which Hunt "reassured him [Zarif] our concern was destination not origin of the oil."

Hunt added that the "U.K. would facilitate release if we received guarantees that it would not be going to Syria, following due process in Gib [Gibraltar] courts."

The Iranian tanker Grace 1 was captured earlier this month on suspicion of breaking European Union sanctions, according to the BBC. The head of Gibraltar's government said Friday the tanker was carrying 2.1 million barrels of light crude oil.

Fabian Picardo told the country's parliament that the ship is suspected of breaching European Union sanctions on Syrian President Bashar Assad's government and that any nation with a claim to the vessel and its cargo can file a claim in court.

In addition to the tanker's captain and chief officer arrested Thursday, Gibraltar police said they arrested the two second mates of the Panama-flagged tanker on Friday. The two are in custody and are assisting police with their inquiries, authorities said. All four are Indian citizens.

A Royal Marines vessel sails toward the Grace 1 super tanker off the British territory of Gibraltar July 4. (AP Photo/Marcos Moreno)

Tensions between London and Tehran escalated Thursday after the British navy said it had three Iranian paramilitary vessels from disrupting the passage of a British oil tanker through the vital Strait of Hormuz.

BRITIAN WILL BE 'SLAPPED IN THE FACE' FOR SEIZURE OF IRANIAN TANKER, CLERIC SAYS.

The captain of HMS Montrose, a British frigate following the BP-owned tanker, was forced to move between the Iranian boats and the commercial vessel, a Ministry of Defense spokesman said. On Friday, the ministry said it was moving up its timetable to relieve the Montrose with the larger HMS Duncan destroyer in the wake of the recent developments.

"This will ensure that the UK alongside international partners can continue to support freedom of navigation for vessels transiting through this vital shipping lane," the ministry said.

At the same time, Hunt called for "cool heads" to prevail to ensure there is no "unintended escalation."

"We are being clear to Iran that we are not seeking to escalate this situation," he said, adding that the British response had been "measured and careful."