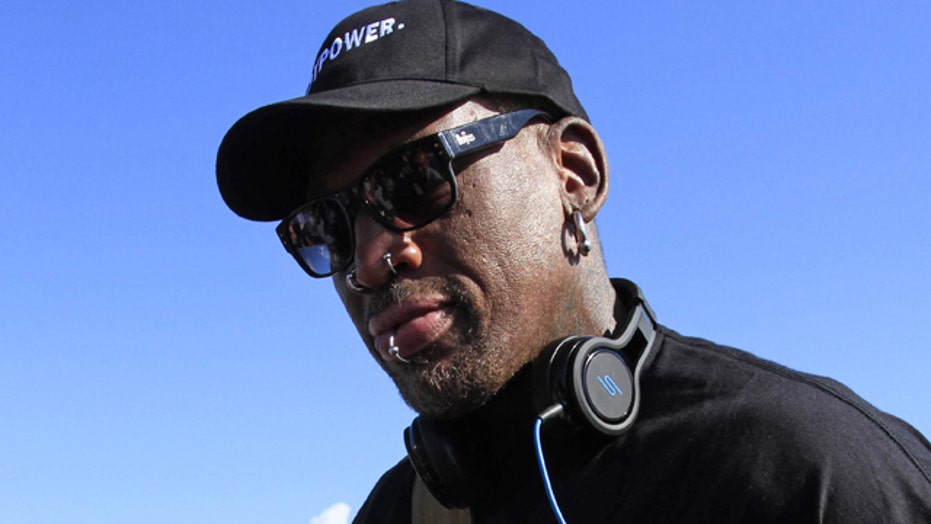 'The Worm' returns to North Korea

Basketball Hall-of-Famer Dennis Rodman arrived in North Korea Tuesday to begin his second visit to that country this year, but the man nicknamed "The Worm" said earlier in the day he will not try to negotiate the release of an American held by Kim Jong-un's regime since late last year.

"I'm not going to North Korea to discuss freeing Kenneth Bae," Rodman told Reuters from Beijing, the traditional jumping-off point for flights into Pyongyang. "I'm just going there on another basketball diplomacy tour."

"I just want to meet my friend Kim, the marshal, and start a basketball league over there," Rodman told the Associated Press. "I have not been promised anything. I am just going there as a friendly gesture.

Rodman previously visited North Korea in late February during a time of heightened tensions on the Korean peninsula. After U.N. sanctions imposed in early March over Pyongyang's February nuclear test, North Korea threatened Washington and Seoul with nuclear and missile strikes and shut down an inter-Korean factory in the North.

Though those tensions appear to have eased, Pyongyang canceled a visit by the U.S. special envoy on human rights issues in North Korea to negotiate the release of Bae, a Korean-American missionary who was arrested this past November and sentenced to 15 years of hard labor for "plotting to overthrow the state." The reason given for the cancelation was U.S. use of nuclear-capable bombers in annual military drills with South Korea.

In recent weeks, Bae's family has expressed concerns about his health and urged the State Department to pressure North Korea to release Bae on humanitarian grounds.

Outside analysts have said Pyongyang is likely using Bae as bait to win diplomatic concessions in a standoff over its nuclear weapons program. North Korea denies this.

Talks aimed at getting the North to give up what's estimated to be a small cache of nuclear devices, and involving the Koreas, the United States, Japan, China and Russia, collapsed in early 2009. Pyongyang says its weapons are intended to protect itself from a hostile Washington.

North Korea accuses Bae of trying to establish an anti-Pyongyang base in the North. Friends say Bae was based in a Chinese border city and traveled frequently to North Korea both as a tour operator and to feed orphans.

At least five other Americans have been detained in North Korea since 2009. The others were eventually allowed to leave without serving out their terms, some after clemency missions by prominent Americans, including former presidents Bill Clinton and Jimmy Carter.

During his previous visit to North Korea, Rodman was pictured laughing, eating, and drinking with Kim Jong-un while watching a basketball exhibition. Kim, who was educated in Switzerland in the 1990s, is reportedly a huge basketball fan and particularly a fan of Michael Jordan, with whom Rodman won three straight NBA championships as a member of the Chicago Bulls between 1996 and 1998.

Rodman described Kim after his first visit as "an awesome kid" and urged President Barack Obama to "pick up the phone and call" the North Korean leader. In May, Rodman took to Twitter to urge "the Supreme Leader of North Korea or as I call him 'Kim', to do me a solid and cut Kenneth Bae loose."