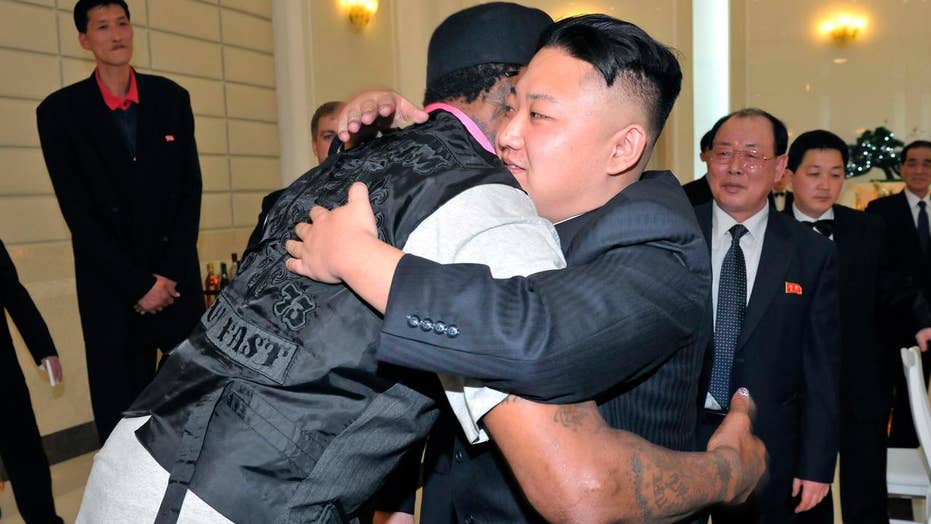 Why is Dennis Rodman so popular in North Korea? A look at his current trip and an overview of his previous visits

Basketball Hall-of-Famer Dennis Rodman arrived in North Korea on Tuesday for the first time in Donald Trump’s presidency and said he is “just trying to open a door” on a mission he thinks may get support.

Rodman talked to reporters briefly before his flight from Beijing to Pyongyang. Asked if he had spoken to Trump about his trip, he said, "Well, I'm pretty sure he's pretty much happy with the fact that I'm over here trying to accomplish something that we both need."

"Maybe Dennis is a lot better than what we have," Trump told "Fox & Friends" after one of Rodman's trips in March 2013. Rodman also appeared as a contestant on the NBC show "Celebrity Apprentice" that year.

The 56-year-old Rodman, who won five NBA championships as a player with the Detroit Pistons and Chicago Bulls, previously traveled to North Korea in January 2014. On that trip, Rodman sang "Happy Birthday" to Dictator Kim Jong Un, who Rodman referred to as his "best friend."

The trip also featured Rodman and a squad of former NBA stars taking part in a pickup game as part of what Rodman called "basketball diplomacy."

Kim Jong Un reportedly is a fan of the NBA, especially the Chicago Bulls teams that Rodman played on in the late 1990s.

His entourage includes Joseph Terwilliger, a professor who has accompanied Rodman on previous trips to North Korea.

Rodman said the issue of several Americans currently detained by North Korea is "not my purpose right now."

A senior Trump administration official told Fox News on Monday that Rodman was travelling as a “private citizen.”

"We are aware of his visit. We wish him well, but we have issued travel warnings to Americans and suggested they not travel to North Korea for their own safety," U.S. Undersecretary of State Thomas Shannon told reporters after discussing the North Korean missile threat and other issues with Japanese counterparts.

North Korea has disclosed and tested four new missile systems this year and could have a working nuclear-tipped intercontinental ballistic missile in the next several years. The country is also holding four Americans for various alleged crimes.

Fox News’ Cristina Corbin and Sam Chamberlain and the Associated Press contributed to this report.