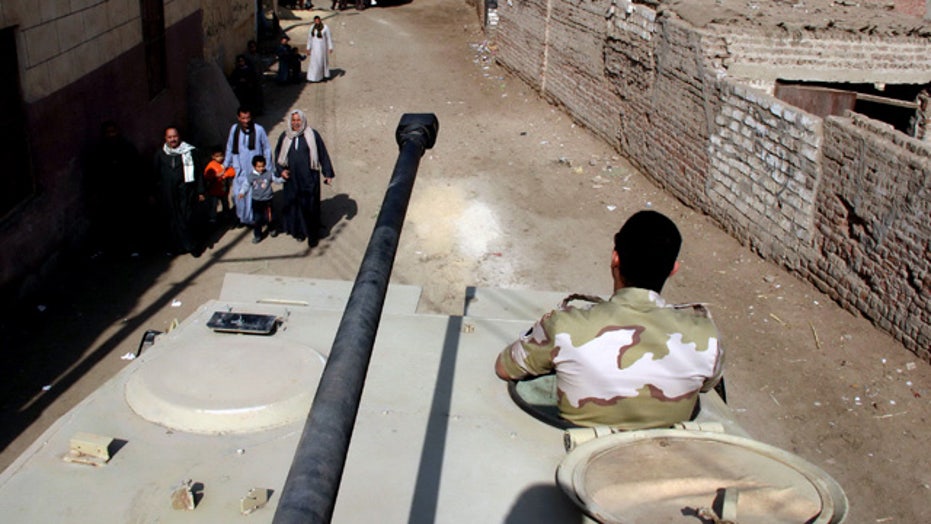 Should US continue to give Egypt billions in aid?

The Health Ministry says clashes between police and protesters loyal to former President Mohammed Morsi have left at least 11 people dead on the first day of a vote on Egypt's new constitution.

The clashes began hours after Egyptians began voting on the new charter that represents a key milestone in a military-backed roadmap put in place since the ouster of Morsi last July.

The ministry says the deaths occurred in Cairo, the adjacent province of Giza and two provinces south of the capital, Bani Suef and Sohag. The statement says 28 people also have been wounded.

A Morsi supporter also was shot to death as he and about 100 others tried to storm a polling station in Bani Suef, said the officials, speaking on condition of anonymity because they were not authorized to talk to the media. It was not clear who was behind the shooting.

In Cairo's working-class district of Nahya, pro-Morsi protesters shot at a polling station and pelted it with rocks before closing all entrances with chains, scaring away voters and locking election officials inside, Mohammed Seragedeen, the judge in charge of the station, said.

Shortly before polls opened, an explosion also struck a Cairo courthouse, damaging its facade and shattering windows in nearby buildings but causing no casualties in the densely populated neighborhood of Imbaba -- a Brotherhood stronghold.

A massive security operation was under way to protect polling stations and voters against possible attacks by militants loyal to Morsi, with 160,000 soldiers and more than 200,000 policemen deployed across the nation of some 90 million people. Cars were prevented from parking or driving by polling stations and women were searched by female police officers. Military helicopters hovered over Cairo and other major cities.

In the days running up to the vote, Egypt looked more like a country going to war rather than one preparing for a supposed transition to democratic rule. The government and the overwhelmingly pro-military media have portrayed the balloting as the key to the nation's security and stability over which there can be no dissent.

Despite the concerns over violence, Egyptians formed long lines Tuesday outside polling stations across the country.

The balloting deals a heavy blow to the Muslim Brotherhood's campaign for the reinstatement of Morsi and paves the way for a likely presidential run by the nation's top general, Abdel-Fattah el-Sissi.

Hundreds of thousands of fliers, posters, banners and billboards urged Egyptians to vote "yes." Posters and campaigns urging a "no" vote have led to arrests.

The referendum is the sixth nationwide vote since the authoritarian Hosni Mubarak was ousted in a popular uprising in 2011, with the five others possibly the freest ever seen in Egypt. While unlikely to be stained by fraud, the vote is taking place at a time when many of the freedoms won in the uprising that toppled Mubarak have vanished in the months since Morsi was removed after just one year in office.

Women and the elderly were heavily represented in most voters' lines in Cairo. The mood was generally upbeat, hostile toward the Brotherhood and hopeful that the charter would bring better days.

Outside a nearby polling station, 67-year-old Alaa al-Nabi Mohammed echoed a sentiment that Egyptians have consigned Morsi and the Brotherhood's year-long rule to the past.

"I am here to send a message to the world and to those who hate Egypt that we want to live and get our country back on its feet," he said.

There was a lone voice of dissent outside another polling station in Assiut.

"El-Sissi is a killer and his constitution is void," shouted a woman, who left the scene just before a security team arrived to look for her.

Among scores of voters interviewed by The Associated Press by midday Tuesday, no one said they had voted against the charter.

Morsi's Brotherhood, which is now branded as a terrorist group, has called for a boycott of the vote. Morsi himself is facing three separate trials on charges that carry the death penalty.

The unprecedented security surrounding the vote follows months of violence that authorities have blamed on Islamic militants. In the six months since Morsi's ouster, there has been an assassination attempt on the interior minister as well as deadly attacks on key security officers, soldiers, policemen and provincial security and military intelligence headquarters.

"You must come out and vote to prove to those behind the dark terrorism that you are not afraid," Interim President Adly Mansour told reporters after he voted early in the day.

Morsi's supporters have said they would stage massive demonstrations and have labeled the draft charter a "constitution of blood." In response, the government has warned it would deal harshly with anyone interfering with the referendum.

Most of Egypt's minority Coptic Christians, who make up about 10 percent of the population, have backed the removal of Morsi and the charter in hopes of winning religious freedoms.

The new charter, drafted by a liberal-dominated committee appointed by the military-backed government, would ban political parties based on religion, give women equal rights and protect the status of minority Christians. But it also gives the military special status by allowing it to select its own candidate for the job of defense minister for the next eight years and empowering it to bring civilians before military tribunals.

The charter is, in fact, a heavily amended version of a constitution written by Morsi's Islamist allies and ratified in December 2012 with some 64 percent of the vote, but with a nationwide turnout of slightly more than 30 percent.