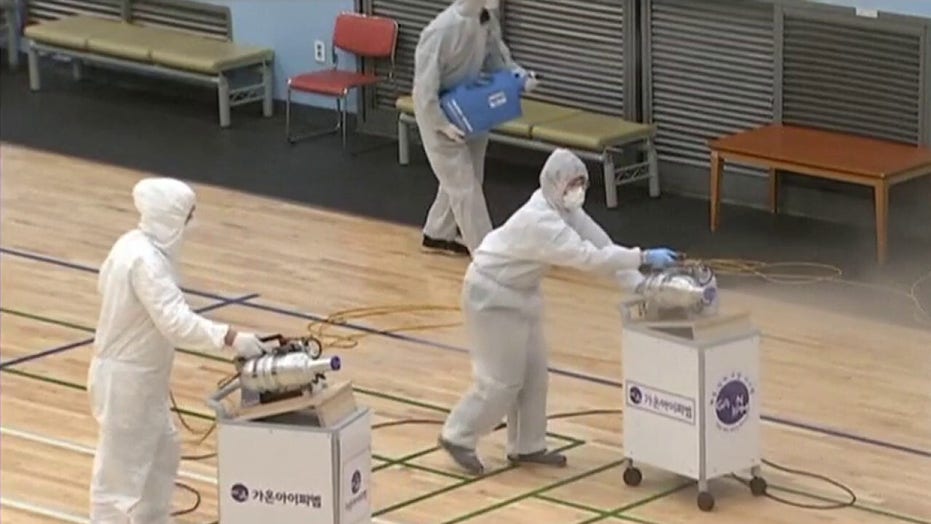 CDC warns against travel to South Korea amid coronavirus outbreak

The CDC is warning Americans against traveling to South Korea as the deadly virus continues to spread; Jonathan Serrie reports from Atlanta.

A new cluster of coronavirus has emerged at a church in South Korea after members used a saltwater spray -- which they believed prevented the spread of the virus -- but used the same spray bottle on members without properly disinfecting the nozzle, health officials acknowledged Monday.

Officials in the city of Seongnam, located in the Gyeonggi Province south of Seoul, said 40 additional members of the River of Grace Community Church have tested positive for COVID-19 after six members, including the pastor and his wife, were confirmed in the past week to have the virus.

All of those infected may have attended the same service on March 8, according to the Yonhap News Agency.

Video images released from the protestant church show a church member sticking the nozzle of the spray bottle into several church members.

“It’s been confirmed that they put the nozzle of the spray bottle inside the mouth of a follower, who was later confirmed as a patient, before they did likewise for other followers as well without disinfecting the sprayer,” said Lee Hee-young, head of Gyeonggi Province’s Covid-19 task force, according to the South China Morning Post.

At least 46 people at the church have tested positive for coronavirus. (Handout)

“This made it inevitable for the virus to spread,” he added. “They did so out of the false belief that saltwater kills the virus.”

The city's government has since tested all of the church's 135 followers, including about 90 who attended the service on March 8, Yonhap reported.

The church's pastor, identified only as Kim, apologized for the mass infection of his church members in a phone interview with Yonhap News Agency, adding that he intends to retire after the crisis is over.

A woman wearing a face mask walks near workers wearing protective gears preparing to spray disinfectant as a precaution against the new coronavirus in Seoul, South Korea, Monday, March 16, 2020.

"I feel deeply sorry about what has happened," he told Yonhap. "I will take all the blame and responsibility."

The cluster in cases connected to the Seongnam church has become the second-largest cluster of infections near Seoul after an insurance call center where some 129 people have been reported to have contracted coronavirus.

On Monday, South Korea reported 74 more cases over the past 24 hours, a day after it announced 76 new cases.

The figures are the lowest daily increase in new infections in about 25 days. That's a stark contrast with the more than 900 new cases reported on one day in late February.

There are still worries that infections might surge again from those returning from Europe or from local people who are reportedly resuming attending gatherings like church services. There have been calls for authorities to further postpone the new school year, which was to begin on March 23 after two rounds of delays.

South Korean Prime Minister Chung Se-kyun said the country’s decline in cases is a “hopeful sign” but urged caution over widening outbreaks across Europe and the United States.