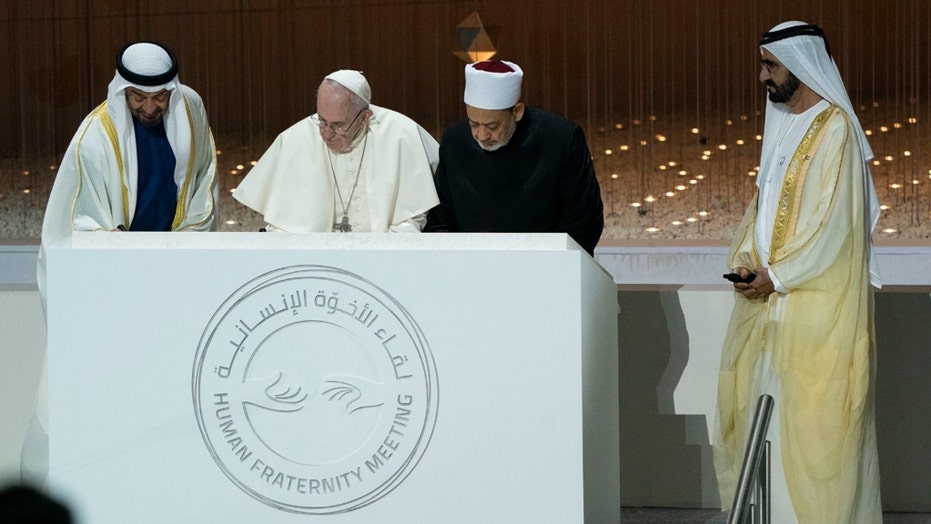 Pope calls for solidarity in Easter message amid COVID-19 pandemic

Pope Francis is being accused of "blasphemy" and "sacrilege" by some Catholics for participating in an interfaith prayer Thursday with Muslims, Jews and Christians, calling on God to end the coronavirus pandemic.

The Abu Dhabi-based multifaith Higher Committee on Human Fraternity formed after the pope's historic visit in 2019 to the Arabian peninsula. Its nine members came up with the idea to pray, fast and perform charitable works.

Aware of the potential controversy, the pontiff addressed the matter during his Friday morning Mass at the Vatican.

"Maybe there will be someone who will say, 'This is religious relativism and it cannot be done," Francis said. "But how can we not pray to the father of us all? Each one prays as they know how, as they are able to. We are not praying one against the other, one tradition against another ... (but) as brothers."

The multifaith prayer upset many among the faithful.

"The only 'spiritual' union that Christians recognize is the communion of the Holy Spirit with those baptized into the Body of Christ," English Deacon Nick Donnelly told Church Militant. "He's asking us to unite ourselves on the level of spirit with those who worship idols and demons or who venerate false prophets that deny the divinity of Christ."

Donnelly called His Holiness' actions "appalling" and wrote on Twitter that the committee is trying to create "a false 'one world religion'".

The traditionalist Catholic blog Rorate Caeli mocked the pope, Reuters reported, describing him as, "Francis' Fast with Infidels" and calling on the faithful to feast, instead of fast, on pork, which neither observant Muslims nor Jews eat.

THIS PASTOR URGES CHURCHES NATIONWIDE TO REOPEN IN DEFIANCE OF GOVERNORS

But not all Catholics were upset. Many expressed their approval online and the Church of Jesus Christ of Latter-Day Saints tweeted its support: "Our hearts are joined with our brothers and sisters in the Muslim, Catholic and other faith traditions".

In his own tweet, Francis said: "May God have mercy on us and put an end to this tragedy, this pandemic, as well as the pandemics of hunger, war, and children without an education. This we ask as brothers and sisters, everyone together."