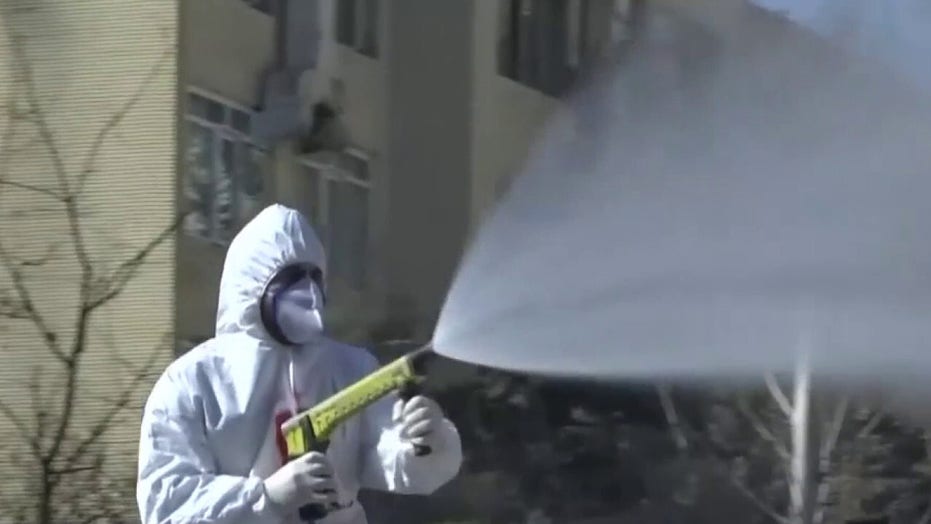 Authorities warn Italians not to visit elderly parents due to risk of coronavirus exposure; Amy Kellogg reports from Milan.

Pope Francis delivered his Sunday blessing via video to prevent crowds from gathering in Vatican City as a precaution against the spread of the coronavirus.

The pope gave the address via livestream from a library inside the Vatican at noon local time -- hours after about 16 million people in northern Italy were placed under a sweeping quarantine in the European country most heavily hit by COVID-19.

The 83-year-old leader of the Catholic Church traditionally delivers his weekly Angelus Prayer from a window overlooking a crowd in St. Peter’s Square in Vatican City, a city-state located within Rome. His message this week focused mostly on the situation in Syria amid an ongoing, 9-year civil war, Vatican News reported.

Shortly after midnight Sunday, Italian Prime Minister Giuseppe Conte signed a decree affecting 16 million people in the country’s prosperous north, including the Lombardy region, where Milan is located, and at least 14 provinces in neighboring regions. The measures will be in place until April 3.

“For Lombardy and for the other northern provinces that I have listed, there will be a ban for everybody to move in and out of these territories and also within the same territory,” Conte said. “Exceptions will be allowed only for proven professional needs, exceptional cases and health issues.”

On Saturday, Italy reported its biggest daily increase in coronavirus cases since its outbreak began on Feb. 21. The number of infected people rose 1,247 in the previous 24 hours, taking the total to 5,883. Italy’s death toll rose to 233.

FILE - In this Wednesday, Feb. 26, 2020 file photo Pope Francis wipes his nose during the Ash Wednesday Mass opening Lent, the forty-day period of abstinence and deprivation for Christians before Holy Week and Easter, inside the Basilica of Santa Sabina in Rome. Pope Francis is sick and skipped a planned Mass with Rome clergy across town on Thursday, Feb. 27, 2020, officials said. (AP Photo/Gregorio Borgia)

There was chaos and confusion in the hours before Conte signed the decree, as word leaked to the news media about the planned quarantine. Students at the University of Padua in northern Italy who had been out at bars on Saturday night saw the initial reports on their cellphones and rushed back to their apartments to grab their belongings and head to the train station.

Hundreds of passengers, some wearing face masks and rubber gloves, crammed onto the last local train leaving Padua at 11:30 p.m. Anxious students wrapped scarves around their heads, shared sanitizing gel, and sat on their suitcases in the aisles. No conductor came by to check tickets, according to The Associated Press.

Rome did not fall under the quarantine. The Vatican confirmed its first coronavirus case on Friday after a patient tested positive for the viral disease at its health clinic. Last week, Francis tested negative for the coronavirus after falling ill with a cough, chills and other flu-like symptoms, the Il Messaggero newspaper reported.

“The cold with which the Holy Father was diagnosed is running its due course,” Vatican spokesman Matteo Bruni announced Friday, according to the New York Post. “He continues to celebrate Holy Mass daily and follow the Spiritual Exercises, as we have reported in recent days.”

The pope cut back on his schedule while sick, giving up a weeklong retreat but keeping his private meetings, according to Il Messaggero. Even so, with coronavirus fears escalating in Italy -- and the fact that Francis had never canceled so many public events since assuming the papacy -- his absence from the public raised concerns.

Around the world, other countries have been increasingly following the example set by China – where the virus first emerged late last year — by imposing travel controls and shutting down public events. China has suffered about three-fourths of the world’s 106,000 coronavirus infections and most of its nearly 3,600 deaths.