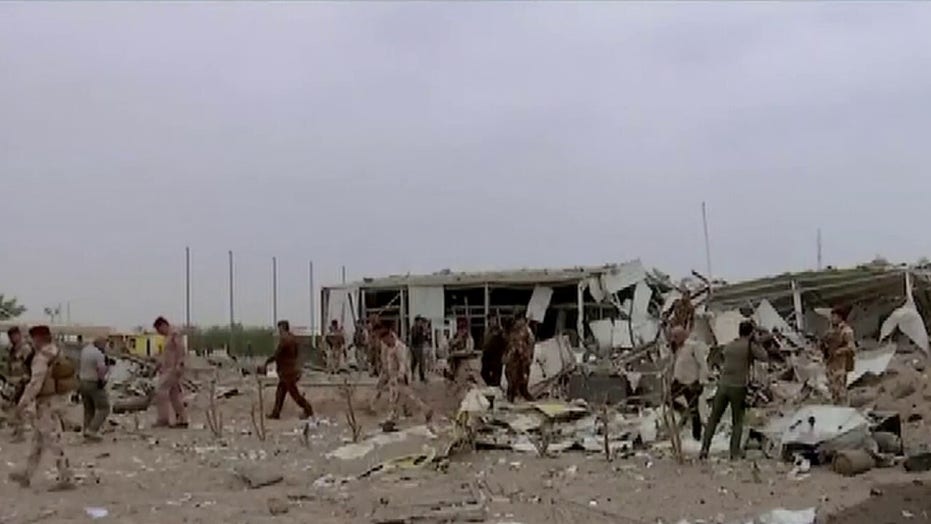 Coronavirus has torn through Iran in recent months, prompting calls from the international community that the United States lift heavy economic sanctions to help them fight the contagion.

But according to many analysts, even with such a crippling pandemic, it has failed to curb Iran's nefarious support of terrorist organizations and proxy wars.

"Lifting core U.S. sanctions on Iran because of the coronavirus would be irresponsible and would not solve the fundamental problem: the regime's well-documented history of mismanagement and corruption," Jason Brodsky, Policy Director for United Against Nuclear Iran (UANI), told Fox News.

And while one may assume that the massive health crisis might prompt Iran to focus more on what is happening in its own borders, critics said that with much of the world distracted, they have instead stepped up menacing behavior – attacks in Iraq, fighting in Yemen and the continued of squeezing of the last rebel stronghold in Idlib in support of Bashar al-Assad in Syria.

Moreover, Amnesty International reported Thursday that at least 36 prisoners had been killed at the hands of security forces and officials for staging protests out of fear of contracting coronavirus, which has been fast spreading through the country's dilapidated penitentiary system.

And the United Nations Nuclear watchdog also said that Tehran is hampering efforts to clarify past nuclear-related activities. On Wednesday, a spokesperson for the Iranian Atomic Energy Organization proclaimed that Iran is currently producing 60 "advanced centrifuges" daily.

"The regime's priority remains its own survival and financing its proxies and partners over its people. Even during this time of economic turmoil," Brodsky said. "According to the U.S. State Department, Iran's supreme leader just last month increased funding for the Islamic Revolutionary Guard Corps – 33 percent higher than President Rouhani's original request – and more than doubled the funding of the Basij. So, the risk of diversion of funds looms large."

As of Thursday, the official statistics regarding the outbreak stood at 66,220 confirmed cases and 4,110 deaths in the nation of 81 million. However, opposition groups claim that real figures have been covered-up, alleging that more than 20,000 have died. To date, it has been the hardest-hit country in the Middle East.

Since the early days of the coronavirus onslaught in February, President Hassan Rouhani has accused the U.S. of "economic and medical terrorism," and of "violating international conventions," asserting that the stringent sanctions have mangled their ability to adequately save Iranian lives.

"Iran has any number of huge problems, not least the spread of this disease and the mismanagement of the economy, but there is little question in my mind that U.S. sanctions are taking a toll on Iranians suffering a widespread health crisis," concurred Jon Alterman, director of the Middle East Program at the Center for Strategic and International Studies (CSIS).

In this Saturday, March 7, 2020 file photo, a cleric, right, assists a medic treating a patient infected with the new coronavirus, at a hospital in Qom, about 80 miles (125 kilometers) south of the capital Tehran, Iran. Nine out of 10 cases of the virus in the Middle East come from the Islamic Republic. Fears remain that Iran may be underreporting its cases. Days of denials gave the virus time to spread as the country marked the 41st anniversary of its 1979 Islamic Revolution with mass demonstrations. For most people, the new coronavirus causes only mild or moderate symptoms. For some it can cause more severe illness. (Mohammad Ali Marizad/Rasa News Agency via AP,)

Almost two years ago, Trump pulled the U.S. out of the 2015 Nuclear Deal sealed by the Obama administration and re-imposed harsh sanctions. Earlier this week, some two-dozen former U.S. and European Union diplomats and security officials – including former Secretary of State Madeleine Albright – called on the U.S. government to at least temporarily loosen the sanctions so that they can appropriately treat those infected.

The Trump administration has, however, contended that sanctions do not impact Iran's medical sector and doubled-down that Washington – from the beginning – extended an olive branch to help the beleaguered country grapple with the virus. And despite claims of financial desperation, Tehran authorities turned away humanitarian assistance last month from the France-based Doctors Without Border (MSF), stating that they had the matter under control.

"Last summer, the chief of staff to Iran's president disclosed that over $1 billion in hard currency allocated for importing essential goods and medicine had 'disappeared,'" Brodsky pointed out. "That's not to mention the U.S. Treasury Department finding in 2018 that the regime used an Iran-based pharmaceutical company to assist Syria in oil payments."

Furthermore, Washington has underscored that Tehran could tap further into is sovereign wealth fund amid the coronavirus crisis, of which Rouhani withdrew $1 billion over the past week.

In this photo released on Friday March 20, 2020 by the official website of the office of the Iranian Presidency, President Hassan Rouhani delivers a message for the Iranian New Year, or Nowruz, in Tehran, Iran. Supreme Leader Ayatollah Ali Khamenei and President Hassan Rouhani in separate new year messages vowed to overcome the new coronavirus and increase economic growth. (Iranian Presidency Office via AP)

Nonetheless, Tehran has appealed to the International Monetary Fund (IMF) to grant them $5 billion from its emergency funding program, which the White House has since signaled that it intends to block. And in further mixed messaging, Rouhani also announced this week that sectors of the economy would be re-opened as early as next week, with the worst of the outbreak behind them.

"It's not possible to control how Iran spends its money, although the $5 billion IMF loan the administration is blocking could be targeted and audited, but we can limit Iranian support for militia proxies by exiting Iraq and making the Saudi ceasefire in Yemen permanent, which will undercut Iran's reason for aiding the Houthis there," explained Benjamin Friedman, policy director of Defense Priorities. "Washington can do the decent thing and bring Iran back into compliance with the JCPOA, constraining its nuclear program, in one fell swoop by suspending sanctions."

The religious regime has insisted that it would spend the money fending off the pandemic, but critics beg to differ – insisting it would only make it easier for them to finance its offshore work, ranging from Hezbollah in Lebanon and the Syrian government to militias in Iraq, Yemen and even narcotics networks in Venezuela.

"The Iranian regime cannot be trusted at all. Every dollar has to be monitored, so it ends up going to the intended people: Covid-19 patients," added Alex Vatanka, director of the Iran Program at the Middle East Institute. "It is not just the proxy wars that are costly, but corruption and costly regime infighting are serious risks to international funds going into Iran. The regime is inherently not transparent, and the risk of abuse of loans and aid is very high."