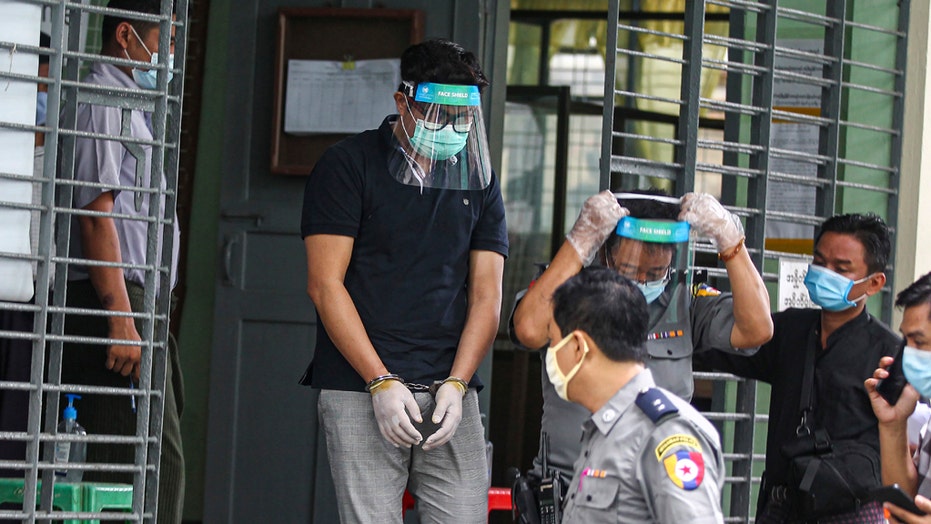 A Christian pastor in Southeast Asia who preached a sermon telling churchgoers they would be immune to coronavirus -- then contracted COVID himself -- is facing charges for organizing services in defiance of Myanmar government orders.

Pastor David Lah, a Myanmar-born Canadian citizen, faces three years in prison, alongside three others in the city of Yangon for continuing services after a ban was imposed on March 13, according to Christian persecution watchdog International Christian Concern.

On Wednesday, Lah made his first court appearance, where the judge ordered his detention for 15 days pending a possible trail while police continue their investigation. Lah made no public comments.

Canadian pastor David Lah covered with face shield and mask is escorted by police men as he leaves from a township court after his first court appearance Wednesday, May 20, 2020, in Yangon, Myanmar. Lah attends a court hearing related to charges filed against him for allegedly organizing public Christian activities in Yangon back in April, after the regional government banned mass gatherings in mid-March to curb the spread of the coronavirus. (AP Photo/Thein Zaw)

In a sermon in late March, Lah told followers: “If you hear the sermon of God, the virus will never come to you, I declare it with the soul of Jesus Christ.”

He was not arrested at the time by authorities because he was in the hospital with COVID-19, CBC News reports. He is currently quarantining at a hotel through May 19, after which legal proceedings against him are expected to continue.

Canadian officials are in contact with Lah offering consular services and he is on the list for evacuation for the end of May.

"Given his Canadian citizenship and the publicity surrounding his case, the Burmese government might grant him a lighter sentence, or deport him once he is done with his quarantine," Jeff King, ICC president, told Fox News on Tuesday.

“Because of Lah’s action, many Christians in Myanmar face criticism and have sensed hostilities towards them in the Buddhist majority country,” ICC added in a statement. “Christian leaders have appealed to citizens to work together to fight COVID-19 in unity and love as anti-Christian sentiment surges on social media. They also urged people not to post and share fake news, photos and videos on Facebook that may be offensive to religion.”

The Southeast Asian country has confirmed 188 cases with at least 6 deaths.