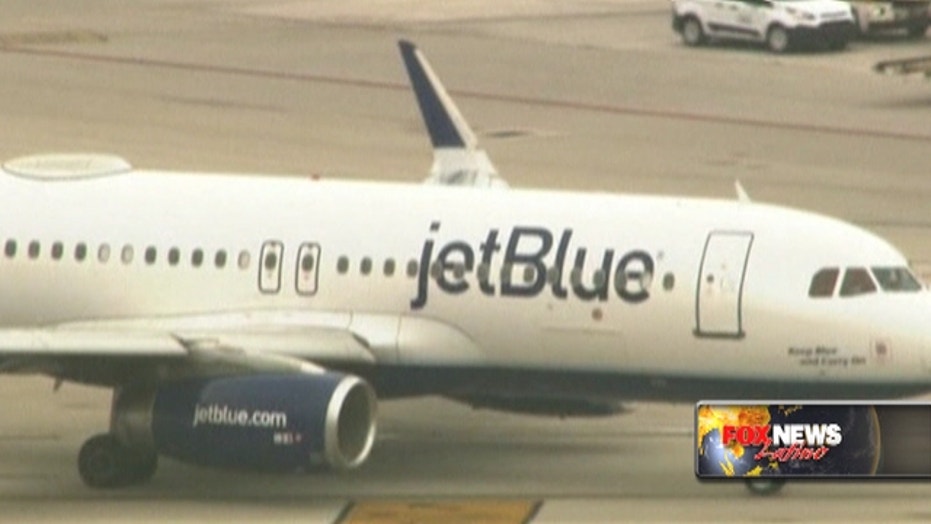 First commercial flight from the U.S. to Cuba

Commercial travel between the U.S. and Cuba started just a few minutes past 10 a.m. on Wednesday via JetBlue flight 387.

SANTA CLARA, Cuba (AP) – It took an hour and a $330 paper check to buy the printed blue ticket for my one-way charter flight from Havana to Miami, the last I will ever take.

Check-in meant nearly two hours in a line that almost spilled out the terminal doors. I barely made it aboard my 45-minute flight Sunday.

I came home to Cuba in Seat 4B Wednesday on the first commercial flight from the U.S. in more than half a century. The electronic ticket cost $98.90 and took less than three minutes to buy on JetBlue's website. For an extra $35, I hauled back 100 pounds of goods that are nearly unobtainable in Cuba: porcelain kitchen tiles, ice cube trays, a designer dress for my fiancee.

Multiply those numbers by roughly 300 flights a week and you have the makings of a sea change in the U.S.-Cuba relationship, perhaps the most important development since Presidents Raúl Castro and Barack Obama declared detente nearly two years ago.

After more than 50 years without regular air service, Cubans will be able to visit family in the U.S. on the same commercial airlines that serve the rest of the world. No more slipping a "tip" to a government sales agent simply to allow you to buy a more than $500 ticket for the short hop to Miami. No one weighing your hand luggage on the way back and charging you for every pound in excess of the scanty limit.

"This was a great deal and we're already JetBlue members," South Florida grandmother Neta Rodriguez told me in the check-in line Wednesday morning on her way to visit family in our destination, Santa Clara, and in Havana. "You can buy it from the comfort of your own home. You don't even want to know how much I've spent on trips to Cuba over the years."

For Americans, the burdensome process of traveling to Cuba is suddenly almost seamless. A federal affidavit has become a box you click on an airline website. You can buy Cuban visas in U.S. airports. All of a sudden, a weekend getaway to Cuba is a real possibility for millions of Americans. By December, you'll be able to fly directly to Havana from Houston, Los Angeles and New York, alongside the more obvious Fort Lauderdale and Miami.

The growing class of Cubans and Cuban-Americans who split their lives between the countries one day may turn Miami-Havana flights into the Caribbean equivalent of the New York-Washington, D.C., shuttle.

The mood aboard Wednesday's flight from Fort Lauderdale was celebratory, and tinged with imagery from the era when Cuba was the United States' tropical backyard escape. A band played Cuban music at the gate. A commemorative poster for JetBlue's new destination features a jubilantly dancing couple in traditional dress.

A burly, bearded Cuban-American flight attendant almost choked up as he told us, "We are really excited that this happened for Cubans and for people from the United States as well. This will be a great moment for all of us and, I'm pretty sure, for the families of both countries."

Many aboard the 150-seat Airbus A320 were journalists and JetBlue staff. A good number of those who were neither reporters nor airline employees had no idea they were going on board a historic flight. Many were taken aback and impressed as Foxx delivered a short talk about what he described as an important step forward in Obama's policy of normalization.

"Sorry I couldn't pick up. I was listening to the president," one man told a relative in Spanish, presumably tongue in cheek, after we landed.

The Cuban and American governments publicly insist that the U.S. formal ban on tourism remains a high barrier for U.S. visitors because it requires them to engage in one of 12 legally approved categories of activities including "people-to-people" educational travel. In private, most acknowledge that the Obama administration has turned the tourism ban into a paper-thin legal fiction.

Americans no longer are required to travel in groups led by U.S. guides working with Cuban government travel companies. This makes any travel requirement unenforceable.

The requirements for guided groups were meant to guarantee that Americans engaged in meaningful contact with the Cuban people instead of supposed frivolous tourism. Obama's abolition of the restriction creates a far bigger market for commercial flights and makes it more likely in many cases that Americans engage in truly meaningful travel.

Adventurous Americans can now fly directly to Cuba and cruise around on their own, independent of government guides and bus drivers who make sure they hew to a state-approved itinerary.

Some of the U.S. routes fly to beach resorts where you can find powdery white beaches, cold mojitos and government-run, all-inclusive hotels but not a lot of educational activities.

Keane Daly and Taimairie Locke, both 25, were heading down on my flight for a weeklong backpacking trip around the island to see the sights and practice their Spanish. They had reserved their first night on Airbnb. Beyond that, they would improvise.

"We're just going to see where the world takes us," Locke said.