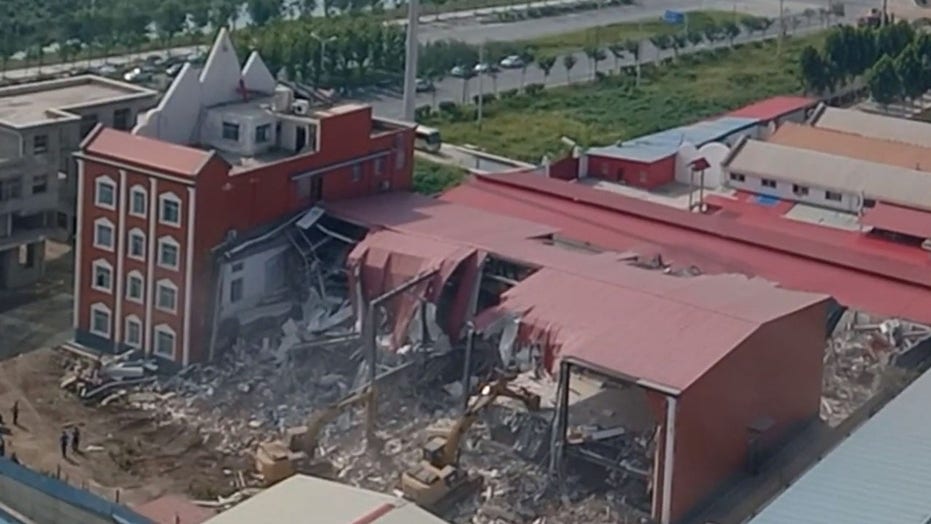 Authorities in China forcibly removed Christians and arrested several faith leaders gathered at a state-recognized church that suddenly was deemed "illegal" by the Chinese Communist Party (CCP), moments before it was demolished, according to a Chinese persecution watchdog.

Around 1,000 Chinese personnel, including police officers, carried out a raid at the True Jesus Church in the province of Henan, forcibly removing congregants -- including two elderly members who were injured in the incident and had to be taken to the hospital -- before excavators began demolishing the church worth roughly $1.4 million, Bitter Winter, a religious liberty magazine focused on China, reported.

FCC CHAIRMAN WARNS ABOUT CHINA'S 'LEVERAGE' OVER NBA: IMAGINE WHAT BEIJING CAN DO WITH 5G NETWORKS

Marco Respinti, director-in-charge of the Italian-based publication, told Fox News the CCP persecution of religion is nothing new, but going after this church, one that belongs to the Three-Self Patriotic Movement, a state-sanctioned Protestant church "supposedly not touched by the state," doesn't bode well for open believers living in the Communist nation.

True Jesus Church, located in Caidu town of Shangcai county, under the jurisdiction of Zhumadian city in the central province of Henan, was destroyed by Communist authorities. (Bitter Winter)

"One thousand people in the church, trying to defend their rights recognized by the state, removed and attacked in such a way, it's really something that is kind of nightmare, and it doesn't point to nothing nice for believers," Respinti said. "We think this is the beginning of the last step by the CCP in persecuting minorities and religious groups."

He added, "What we see now are the so-called protected religions harshly attacked by the state, making no difference between religions that are tolerated and underground movements."

The researcher points to new regulations on faith that were passed in 2018 and since then have only made things worse for anyone who isn't an atheist and dedicated solely to the Communist party.

It started on June 22, when 200 believers at the True Jesus Church were surprised by a raid of around 60 officials. The director of Religious Affairs Bureau, who was leading the raid, claimed the state-sanctioned church was involved in "illegal fundraising" and declared the sanctuary an "illegal building," which the state wanted to turn into a nursing home.

The True Jesus Church in Caidu town before it was demolished. (Bitter Winter)

When the congregants refused to vacate the building, police surveilled and recorded services in the church until July 26, when officials stormed the premises and turned it into rubble.

In August, eight leaders from the church and 13 members were charged with the "unlawful detention" of a CCP official and were arrested, which an employee at the church told Bitter Winter reminded them of the 1989 Tiananmen Square massacre.

“The CCP framed university students for rioting and used tanks to crush many of them to death," the churchgoer said. "The Communist Party will resort to any means possible to achieve its goals."

Now a lawn with saplings planted sits where the large church once stood, bearing no trace of its existence.