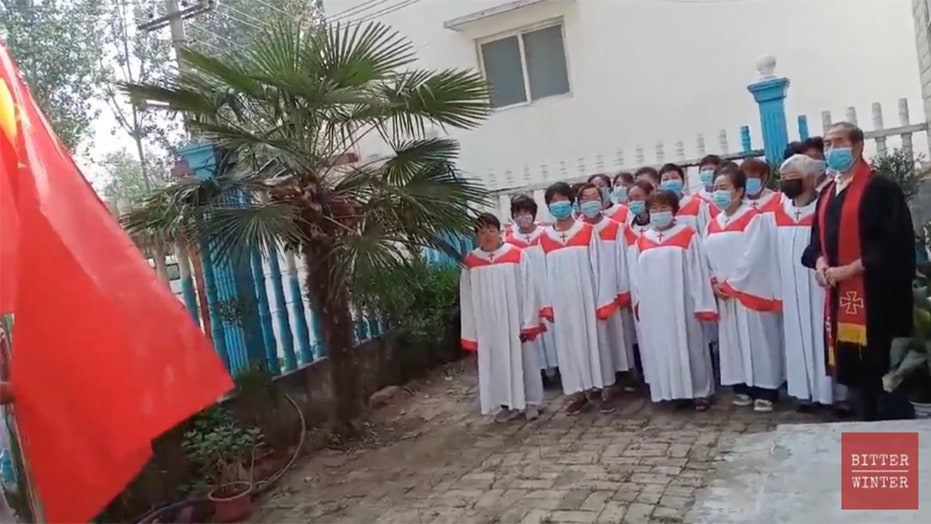 Under Chinese Communist Party (CCP) instruction, state-run churches in China say they were required to raise the national flag, sing the anthem, and praise Xi Jinping's handling of the coronavirus pandemic in order to reopen, a watchdog reports.

The Lishiting Catholic Church in the Shunhe district of Kaifeng reopened on June 14 with around 20 people as a priest led the required ceremony supervised by government officials, according to Bitter Winter.

“We solemnly raise the national flag here today after the epidemic, witnessing the fruits of all people working together under the leadership of Xi Jinping who directs the government and the Party,” the priest allegedly said.

The Lishiting Catholic Church in the Shunhe district of Kaifeng holds a reopening ceremony on June 14, 2020. (Courtesy Bitter Winter)

On the same day in the same district, a member of the Gangxi Christian Church said its leaders were also instructed to laud Chinese leaders for their handling of the pandemic.

“The church finally reopened after five months, 147 days, or 21 Sundays, but instead of singing hymns to praise God, the government required us to raise the national flag and sing the national anthem, praising Xi Jinping’s ‘victory in fighting the epidemic,'" a congregant shared.

The congregant added, “This is completely contrary to our belief."

A reopening ceremony at the Gangxi Christian Church in the Shunhe district on June 14, 2020. (Courtesy Bitter Winter)

The Two Chinese Christian Councils in Henan, Zhejiang, and other provinces, shared that they were instructed to  tell members "moving stories about China's battle with the pandemic."

And a pastor from Quannan Church, the largest Christian church in Quanzhou city in the southeastern province of Fujian, noted that he was told by officials to also criticize the United States for their handling of COVID-19.

The pastor said he was required to promote love for the “socialist system and the Communist Party.”

The United Front Work Department and Religious Affairs Bureau reportedly demanded churches to hold flag-raising ceremonies and promote patriotism, a member said, adding that an official said: “From now on, all churches have to do so, or they will be shut down, and their leaders dismissed.”

Marco Respinti, the director-in-charge of the Italian-based publication Bitter Winter, told Fox News this is another example of the CCP trying to "sinicize," meaning "everything must become truly Chinese, but what they really mean is that everything must become puppets of the Communist regime ... even at the cost of obliging people to blasphemous things."

Respinti notes other examples of how the CCP forces churches to remove Christian symbols and replace them with portraits of Xi Jinping.

And he says religious persecution in the country that is known for violating human rights across the board only worsened by trading freedoms for obedience to the Communist party.

"China used the coronavirus in many ways, in one way for propaganda reasons," Respinti said. "We know the Chinese regime is guilty for the coronavirus, at least in delaying vital information and responsible for thousands of deaths around the world."

"They were saying they were able to defeat the coronavirus," he added. "They sold this lie to the world and also tried to sell the so-called Chinese model offering to help ... all the while oppressing religious and ethnic groups."