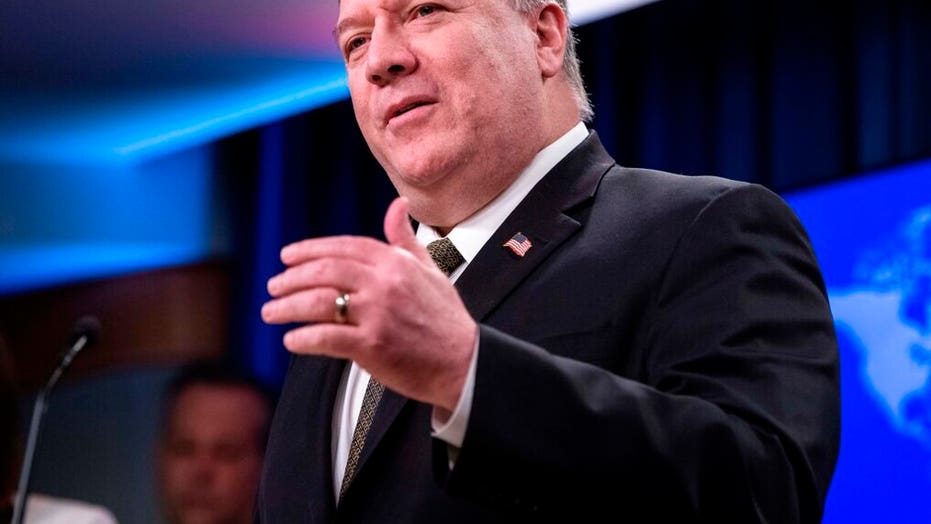 Secretary of State Mike Pompeo reacts to China lashing out and accusing the U.S. of lying about coronavirus outbreak

China, taking a step toward a return to business as normal, announced Wednesday that its previously postponed national legislature session will be held in late May.

The National People's Congress, delayed from early March because of the coronavirus outbreak, will start on May 22, the official Xinhua News Agency said.

It wasn't immediately clear whether the 3,000 or so delegates would come to Beijing for what is the biggest political meeting of the year, or if it would be held virtually through videoconference.

In this March 15, 2019, file photo, Chinese President Xi Jinping arrives for the closing session of the National People's Congress in Beijing's Great hall of the People. China has decided to hold the annual meeting of its ceremonial parliament late next month after postponing it for weeks because of the coronavirus outbreak. The official Xinhua News Agency said the National People's Congress would open in Beijing on May 22.  (AP)

A more than 2,000-member advisory body that meets in tandem with the Congress will start one day earlier on May 21, Xinhua reported.

“I’m not aware of the specifics, but I believe because of the epidemic, the two sessions this year will be somewhat different from other years,” foreign ministry spokesman Geng Shuang said when asked if there would be any changes.

The two-week annual meetings are largely ceremonial, with the legislature rubber-stamping decisions reached earlier by Communist Party leaders, but in typical years they are a colorful spectacle in the nation's capital.

The delegates to the congress normally descend on Beijing by plane and train and sit shoulder-to-shoulder in the colossal auditorium at the Great Hall of the People to hear a state-of-the-country address from the country’s No. 2 leader, Premier Li Keqiang.

The May 22 start date was announced at the end of a four-day meeting of the congress's standing committee, which handles most legislative affairs when the congress is not in session. Of its 170 members, 47 participated remotely through online video.

With the epidemic situation improving and economic and social life gradually resuming, the conditions have been met for holding the session, a standing committee statement said, according to Xinhua.

The National Health Commission reported 22 new cases of coronavirus on Wednesday, including 21 that came from abroad and one in Guangdong province, the southern manufacturing hub bordering Hong Kong. That was an uptick from recent days but a sharp decline from the hundreds and even thousands of new cases being tallied daily until early March.

China has registered 82,858 cases and 4,633 deaths. Most were in the central city of Wuhan, where the coronavirus was first detected last last year.

Authorities have relaxed restrictions on going out but are maintaining strict quarantine rules on those coming from abroad. Some cities and provinces have been quarantining those arriving from other parts of China too, but Beijing announced that it would stop doing so starting Thursday for people from areas deemed low-risk.

The Chinese capital is also allowing museums to reopen on Friday, the start of the five-day May Day holiday. A limited number of visitors will be allowed daily. Movie theaters and swimming pools remain closed.

Shen presented a report on plans to revise health-related laws over the next two years, Xinhua said. This year's congress is expected to approve a ban on illegal wildlife trade and legal changes to strengthen the management of medical waste.

Scientists believe the coronavirus likely started in bats and spread to humans, possibly through the wildlife trade.